Robotics Rumble: Teens Fight For Tech Glory
(click image for larger view and for slideshow)
Thirteen years ago, Dan Richardson joined a FIRST high school robotics team not because he was a classic science and technology nerd but because he was tall. As a member of the basketball team at Westminster Academy in Ft. Lauderdale, he was recruited as a "human player" because the robotics enthusiasts needed someone tall enough to reach over a high barrier and drop balls onto the playing field as part of that year's robotics challenge.

"They told me it would mean I could miss school for two days and go to Disney," he recalled. He readily agreed, and found himself at a "technology rock concert" that changed his life, partly because the contest appealed to the same competitive instinct that made him enjoy sports. When he got more involved with the team as a junior, it was because "I was inspired to build better robots than anyone else," he said. "If it hadn't been for the competitive aspect, I don't think I would have been hooked."

The engineering challenge was hard work, "but I knew it was something where I could go pro," Richardson said. Meanwhile, it was dawning on him that his athletic talent for basketball and football might get him a scholarship but probably not a career.

Today, Richardson works as a mechanical engineer at Disney World, designing the next generation of animatronics. He served as an announcer this weekend at the 2013 South Florida FIRST Robotics Competition at the Greater Fort Lauderdale Convention Center. This was one of dozens of qualifying events scheduled between February and early April, leading up to the championship scheduled for April 24-27 in St. Louis.

In this year's Ultimate Ascent challenge, robots competed in a sort of Ultimate Frisbee game, scoring points by tossing flying disks into goals at each end of a field 27 feet wide by 54 feet long. In the first 15-second phase of play, the robots had to be able to operate autonomously, scoring as many goals as possible without human intervention. The remainder of the game was played with the assistance of a driver and a manipulator operator (who controls everything but the maneuvering of the vehicle) piloting the robots across the field to be reloaded with additional flying disks to shoot into the goals. Finally, came the "ascent" part of the game, in which those robots with the wherewithal pulled themselves up a pyramid of pipes, like a robotic jungle gym, earning bonus points for every level climbed. 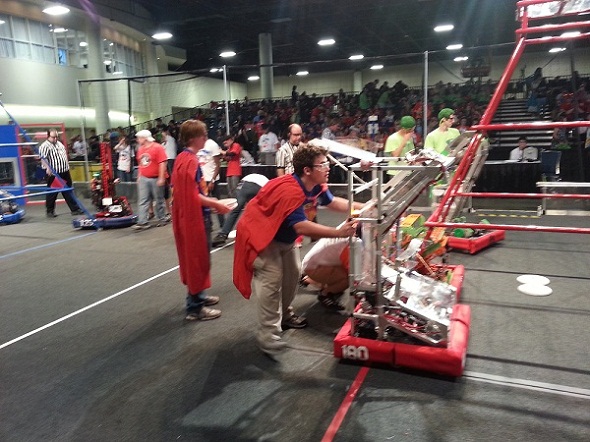 Competitors in the FIRST Robotics Competition get their machines ready to rumble.

As the game advances into the finals and semi-finals, the teams organize into larger alliances, and it's actually an alliance of three teams that wins. In the Fort Lauderdale competition, the victorious alliance included three Florida teams: S.P.A.M. of Stuart (the 2012 world champions), Exploding Bacon of Winter Park, and the Tech Tigers of Coconut Creek.

The challenge is different each year, so one year's winning robot would not necessarily do well in the following year's contest. When this year's challenge was announced in January, teams had six weeks of "build season" in which to go from initial sketches to CAD drawings, prototypes, final hardware and software and a complete working system. After six weeks, teams must observe a "hands off" policy except during a competition when a pit crew can make additional adjustments before the start of play and between rounds.

The FIRST (For Inspiration and Recognition of Science and Technology) program started in 1992 as the brainchild of Dean Kamen, best known as the inventor of the Segway, the versatile Independence robotic wheelchair, and other medical devices. His idea was to expose students to concrete engineering challenges, while having professional engineers encourage and mentor them. This year's FIRST Robotics Competition (FRC) event for high school students has about 54,000 high-school-aged young people organized into 2,700 teams, with the support of about 16,000 mentors and adult advisors and 3,000 corporate sponsors. While FRC is the major event, the program has expanded over the years to also include the FTC (First Tech Challenge) program for grades 7-12, FLL (First Lego League) for grades 4-8, and Jr. FLL for grades K-3.

NASA is a major sponsor because of its interest in better robots for interplanetary exploration. Major aerospace and technology firms, including embedded systems software specialists, also provide support. Participating students also get a shot at the $16 million in scholarships being offered through FIRST this year.

David - this is one of the best articles I've EVER seen about FIRST. Thanks for really taking the time to learn the ins and outs of this awesome program! I've been involved for four years now, first as a student and now as a college mentor. My experience in FIRST equipped me with both technical skills and confidence to obtain a software engineering internship at a Fortune 500 tech company as a freshman in college, a fairly unusual feat. I hope articles like this continue to spread FIRST to those who don't know about it and expose that more people to the great benefits of this amazing program. Also - nice name, mine's the same :)
Reply  |  Post Message  |  Messages List  |  Start a Board

Thanks for your comment. I definitely saw that dynamic at work as well. Also, the approach of having an alliance of 3 teams win the competition, rather than a single team, is very interesting and mirrors the partnerships of the business world.

Although I didn't write about it, several people I spoke with mentioned the principle of "gracious professionalism" as a founding principle of the organization, which is one way they promote the attitude you're talking about.

I found Dan Richardson's comment about how the competitiveness of the robotics league captured his fascination. The spirit of the competition is a paradox - at times competitive, yes, but also cooperative.

My son, Billy, is a member of the Pascack Pioneers of River Vale, NJ. During last year's competition, another team's robot suffered mechanical failure. Billy provided assistance, fixing their robot. When I asked him, "Aren't you helping the competition?", his response was, "It's not a competition to me. It's all about helping and learning from each other".

As well, at the end of each match, teams tried to balance their robot on a "coopertition" bridge with the other team's robot, even nudging a sluggish competitor's robot with their own to accomplish the feat, in order to earn extra points.

So, while each team certainly wants to win, members exude a spirit sorely lacking in the win-at-all-costs world of sports. Learning how to win is important; learning to do so with grace and humility is equally important.
Reply  |  Post Message  |  Messages List  |  Start a Board

BTW, I know the $60,000 / $80,000 budgets some of these teams throw around sound pretty scary to educators operating on a slim budget, but those are the budgets of long-established championship teams who've built up significant backing from commercial sponsors. Also, the budgets have to get higher if those teams make it into the championship and need to travel across the country. I talked to other teams that did respectably well on something more like a $10,000 budget -- still a lot, I know.

As one of the adult leaders says in the story, that experience of asking for the big bucks from the CEO of a potential donor company is almost as valuable as the robot-building experience itself. Watch out when these kids hit the work world with that mix of technical and business knowledge.
Reply  |  Post Message  |  Messages List  |  Start a Board

I took my daughters to one of these robotics competitions a few years back, and it was spectacular. Held in a downtown arena, fans from the different schools were screaming and cheering with all the intensity of an overtime basketball game. Genius.
Reply  |  Post Message  |  Messages List  |  Start a Board