0%
Tweet
Users are sick of their activity-tracking wearable devices. But the answer may be as plain as the ear on your head.

I wouldn't say activity-tracking wearables are dying, but there's evidence showing their use is alarmingly short-lived.

One-third of consumers who've owned a wearable product stopped using it in six months, and that number jumps to 50% for activity trackers like the Fitbit or Jawbone, according to a recent report from Endeavor Partners.

Smartwatches are struggling with design and battery life issues. Wristbands are struggling with "another damn thing I need to bring with me when I exercise" issues -- and they just look disposable. But there's a fledgling movement to track the most accurate fitness data with a device you won't forget.

Fitness data-tracking earphones offer a few important things: First, music, which we all love. And second, the most precise data possible from an overlooked body part: the ear.

[A former IT director is on a mission to improve his life by obsessively monitoring his own data. Read The Quantified Self On Steroids.]

I recently spoke to Dr. Steven LeBoeuf, president of Valencell, a company that licenses its PerformTek biometric sensor technology to device makers including iRiver, LG, and Scosche, a maker of Bluetooth heart-rate armbands. The company has been working for five years to perfect its in-ear sensors. LeBoeuf says the chest strap has always been the best way to measure heart rate while exercising, "but we can get better biometrics accuracy in the ear. Our technology helps, but there are God-given factors."

Valencell's earbud sensor modules make use of a group of arteries inside the ear. When blood flows through these arteries there's a jump in blood-flow signals. At the same time, the earbuds allow light into those artery areas, and the light interacts with blood and returns the information to the sensors. The sensors can then precisely measure your body's change in motion, heart rate, step rate, distance, speed, and calories burned.

The only other place in the body where the blood flow readings are as strong is the finger, says LeBoeuf, but "you won't get accurate readings while exercising because your hand is moving around."

The two smart earphones available using Valencell's technology are the iRiverOn Headset and the LG Heart Rate earphones. Both connect to your smartphone or smartwatch via Bluetooth and provide high-quality audio via iTunes, Spotify, and others, as well as in-ear voice guidance. 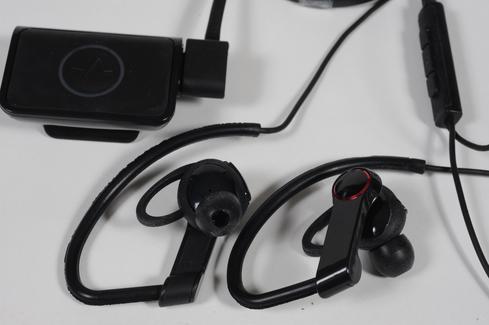 A downside with the iRiver and LG earphones is they both use the Classic Bluetooth protocol, and major fitness-tracking apps like MapMyFitness, RunKeeper, and Strava are not compatible with Classic Bluetooth, says LeBoeuf. So both earbuds can only use the iRiver or LG mobile apps, respectively. Other downsides are each includes its own battery and must be charged, and they're both pricey. iRiver sells for $199 and LG for $179.

Valencell also licenses its sensor technology to SMS Audio (founded by rapper/mogul 50 Cent), which teamed with Intel to create the SMS BioSport In-Ear Headphones. BioSports are wired, non-Bluetooth earphones that plug into the audio jack of a smartphone, smartwatch, or MP3 player to generate power. BioSport is compatible with all the popular fitness-tracking apps, however it doesn't offer in-ear voice guides, and the wired connection may drain a smartphone's battery. (Intel claims the BioSport headphones take as much power as typical headphones.)

The BioSport Headphones will be available this fall and priced cheaper than the LG and iRiver products, likely in the $100 to $150 range. LeBoeuf promises there are wireless smart earphones coming soon that use the Bluetooth Low Energy protocol, meaning they'll work with all the popular fitness-tracking mobile apps.

While smart earphones have great appeal for exercisers, the $150-plus price is not appealing. I, for one, am content to pay $30 for dumb earphones. If I do eventually pay $175 for smart earphones, they'd better be compatible with my fitness-tracking app. I have six months of running data on the Nike+ platform -- I need to take that with me.

For now, LeBoeuf sees the LG and iRiver Bluetooth earphones as premium niche products for elite exercisers and the wired SMS-Intel earphones as a mass consumer product. Gradually, he says, prices will come down.

I haven't used any smart earphones, but embedding the tech into the ritual of earphone use is just smart. Earphones don't need to be won over. They're a gateway to our cherished music. All the better if they can track super-accurate fitness data, too.

Shane O'Neill is Managing Editor for InformationWeek. Prior to joining InformationWeek, he served in various roles at CIO.com, most notably as assistant managing editor and senior writer covering Microsoft. He has also been an editor and writer at eWeek and TechTarget. ... View Full Bio
We welcome your comments on this topic on our social media channels, or [contact us directly] with questions about the site.
Comment  |
Email This  |
Print  |
RSS
More Insights
Webcasts
Are You Ready for When Cyber Attackers Get In?
Linking, Orchestrating, and Managing Your Enterprise Security Systems
More Webcasts
White Papers
NetFlow vs Packet Data
Definitive Guide to Securing DevOps
More White Papers
Reports
Can You Spare 10-12 Mins to Help Us Out with a Survey on Tech Trends?
Got 7 Minutes? Dark Reading Needs Your Help With Our Survey on Incident Response
More Reports

@Thomas I think it can have a motivational effect. I've seen articles claiming that just exercising next to another person who is faster can improve one's time.  As for myself, I don't like to have to keep up with another's pace -- even for walking or biking. But I seem to not fit the standard consumer mold.
Reply  |  Post Message  |  Messages List  |  Start a Board

Activity trackers seem to be like privacy tools -- they appeal to a minority of consumers. And just as it's hard to assess the value of privacy, it's hard to assess the value of activity data. You can certainly measure improved performance by tracking activities; but it's hard to know how that would compare to not tracking the activity and still doing it. In the end, I fear activity tracking is just a hobby that has no real meaning beyond itself.
Reply  |  Post Message  |  Messages List  |  Start a Board
Editors' Choice
Hot Topics