50%
Tweet
Google has updated most Android devices to be compatible with Android Wear and a new batch of apps.

Android Wearables have hardly begun to ship, but there's now a dedicated section of the Google Play Store reserved strictly for apps compatible with Google's smartwatches. The appearance of the storefront ahead of widespread availability of the devices shows Google is serious about pushing Android Wear, which should take off in earnest over the next few weeks.

There may only be two dozen or so apps that work with Android Wear, but the selection will expand rapidly. Some of the early entrants include a handful of Google apps, such as Maps, Hangouts, and Android Wear. The Android Wear app allows smartphone owners to interact with and configure their Android wearable. The rest are third-party apps from IFTTT, Bandisintown, Delta Airlines, 1Weather, Pinterest, and others. The dedicated store is a nice touch, as it aids in app discoverability.

Google took a more important step in supporting Android Wear, however, in the release of Play Services 5.0. Google spent the past week updating all Android devices running 2.3 Gingerbread and up to Play Services 5.0. Play Services is the backbone of Android that permits even old devices to gain new features and functionality thanks to support for additional SDKs and APIs. 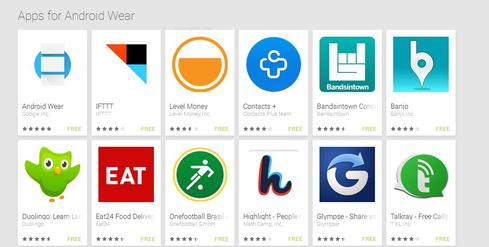 Play Services 5.0 includes a set of APIs in support of Android Wear. These APIs make it easier for Android devices to communicate with apps running on Android wearables. Further, the APIs let developers automatically sync data between smartphones and wearables, as well as add a low-latency messaging interface to manage those communications.

In other words, most every Android device in the market today is now compatible with Android Wear and has access to a small selection of apps. The first two Android Wear devices, LG's G Watch and Samsung's Gear Live, are available for preorder from the Play Store. The Moto 360 will arrive some time later this summer.

Play Services 5.0 does much more than add compatibility with Android Wear. It addresses security issues and adds APIs for Play Games, App Indexing, Google Cast, Google Drive, Google Wallet, Analytics, and Mobile Advertising. Developers now have the tools they need to add more functionality than ever before to their Android applications. The SDK for Android Wear is available separately.

Eric is a freelance writer for InformationWeek specializing in mobile technologies. View Full Bio
We welcome your comments on this topic on our social media channels, or [contact us directly] with questions about the site.
Comment  |
Email This  |
Print  |
RSS
More Insights
Webcasts
Cloud Security Threats Enterprises Need to Watch
Getting the Most from Threat Intelligence
More Webcasts
White Papers
NetFlow vs Packet Data
[Exclusive InformationWeek IT Trend Report] The Cloud Gets Ready for the 20's
More White Papers
Reports
Can You Spare 10-12 Mins to Help Us Out with a Survey on Tech Trends?
Got 7 Minutes? Dark Reading Needs Your Help With Our Survey on Incident Response
More Reports

Android wearable devices have not rolled out in mass yet, but already Lyft can be found in the "Apps for Android Wear" section, Lyft is an interesting concept. On the one hand, it can cause a loss in revenue to the cab firms that have quite a lot of capital invested and a loss in the number of jobs that the industry can sustain. However, on the other hand, it creates jobs, employs stationary capital (cars) to become productive and provides a cheaper ride to clients.

It will be interesting to see the long-term effects of such business models on the economy -- technology is making everything efficient.
Reply  |  Post Message  |  Messages List  |  Start a Board
Editors' Choice
Hot Topics