50%
Tweet
Changes in the EULA (End User License Agreement) for the Android SDK warn developers of doing anything that might result in the "fragmentation" of Android. As with so many of these agreements, ambiguity is rampant and designed to give the vendor — i.e. Google — the freedom to interpret circumstances to its own benefit. In fact, developers aren't the source of the fragmentation problem, Google's own handset OEM partners are.

One of the biggest thorns in Google's side (aside from the FTC), has been that staple criticism of Android: "fragmented." Now Google's doing something about it, but has bristled a few hairs in the process.

But what Google's really fighting isn't fragmentation, which is a programming and infrastructure issue. It's brand dilution — a corporate image issue.

The most recent changes involve a modification to the licensing agreement for Android's SDK, something tech blogger and journalist Tim Anderson called out on his blog by comparing the new SDK to the one for the edition installed on his own system. Three clauses in particular stand out:

The last clause in particular even uses the F word explicitly: "You agree that you will not take any actions that may cause or result in the fragmentation of Android, including but not limited to ... a software development kit derived from the SDK."

In other words, Google reserves the right to say what could cause "the fragmentation of Android" — which, given how vague that clause is, could be anything at all. 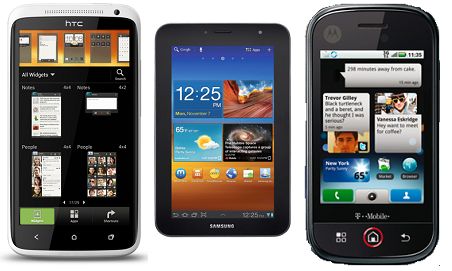 Android systems from different OEMs —HTC, Samsung and Motorola are shown here — look and operate differently. Google and its partners are responsible.

I don't think Google's in the wrong for wanting to keep Android's brand from becoming diluted. But there are two problems with this approach — first and foremost being that you can't put anything in a EULA these days without it being analyzed to death. And a good thing, too: people are sick of having hopelessly open-ended clauses slipped into licensing agreements. They reek either of carelessness on the part of the people who drafted them (legal language and technology still don't mix after all this time), or cynicism and greed.

Trying to prevent fragmentation via EULA or, rather, by using the EULA to further lock down the SDK, smells more of a move to keep Google's own lawyers happy than anything else. It won't stop determined third parties, especially those who have a hit-and-run business strategy. Case in point: Aliyun OS, which Google's Andy Rubin has claimed is an unattributed fork of Android. Rewriting the EULA to make it easier to charge such folks with wrongdoing smacks of closing the barn door after the stampede — especially since, again, these days it's hard to write an EULA to protect your own interests without ticking off the very people who you're trying to court.

The other problem is that most of Android's fragmentation woes aren't because of software. It's been because of hardware, which is all over the map, by design.

The incredible disparity of Android devices is part of what made Android both special and annoying. This is what I mean by brand dilution: when anything can be an Android device, the notion of an "Android device" becomes amorphous, and all but meaningless, and Google loses the ability to protect the reputation of the Android brand.

Device manufacturers are the big culprit here, for doing what was in their best interests, something which Google should have anticipated. They made their own gratuitous changes to Android to make sure it ran well on the hardware they shipped, and made the best use of whatever device features happened to be available. The downside of this arrangement was that you couldn't predict with any degree of accuracy what an "Android device" would be, or what it could do.

Now, many of these rough edges have been smoothed down by the general rise in quality of Android devices and software. I no longer get the impression, save with the most cut-rate, cut-corner products, that there's a sizable amount of current-generation Android hardware that falls below expectations for casual use (not enough internal storage, for instance). Apps are far less device-dependent than they used to be, save for the occasional oddity that requires root privileges (and in that case, it's assumed you know what you're doing anyway).

I do still get irked by the way each manufacturer seems compelled to add its own custom skin to Android, which more often than not is just annoying and distracting (hello, Samsung). But Google and the device makers are banking on the fact that the disparity between devices is an aesthetic issue and not really a functional one.

If I replace my old Samsung Android phone with a new Motorola Android phone, the user interface differences are jarring at first. It's not like having to sit down at a different workstation at your job. In the meantime, the differences between these skins must be a significant support burden for enterprises that allow Android in a BYOD arrangement.

The other major form of Android fragmentation has come from the vastly different versions in heavy use in the field, with version 2.3, (the current version is 4.2) still the most popular. Certainly Google can't blame that on anyone but itself and its partners.

"Android" and "fragmented" have been synonymous for too long, but only because that's a convenient way to not talk about the real issues at hand. The worst diluters of Google's brand have been its very hardware partners. Putting the average developer in a bad situation with EULA changes hardly makes things better.

We welcome your comments on this topic on our social media channels, or [contact us directly] with questions about the site.
Comment  |
Email This  |
Print  |
RSS
More Insights
Webcasts
5 Steps to Integrate SAST into the DevSecOps Pipeline
Linking, Orchestrating, and Managing Your Enterprise Security Systems
More Webcasts
White PapersMore White Papers
ReportsMore Reports