50%
Tweet
Pebble has begun accepting orders for the Pebble Time Steel smartwatch just as Apple's wearable expands availability to Best Buy stores in the US.

Pebble and Apple both have steel smartwatches, but one costs a lot less than the other. The Pebble Time Steel goes for $249, while pricing for Apple's steel-clad wearable starts at $549. Availability of both timepieces has expanded this week.

People who backed the Pebble Time Steel through Kickstarter should expect to see their device arrive soon. The first batch of smartwatches left the manufacturing facility late last month and is already shipping. The basic version of the timepiece, which includes the steel frame and leather band, costs $249. Steel bands for the Pebble Time Steel won't be available until later this year. They cost an additional $50. 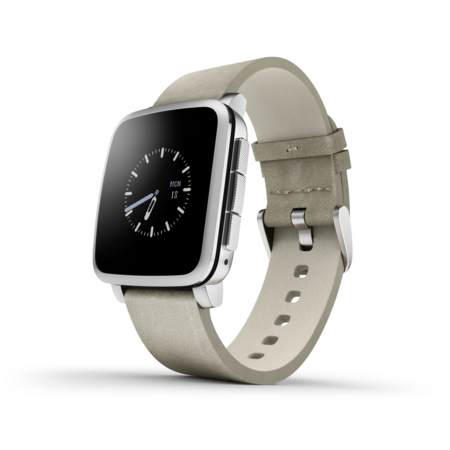 With the Kickstarter campaign fully funded and shipping, Pebble has opened up orders to anyone through its own website. Consumers interested in the Pebble Time Steel can now order directly from GetPebble.com. The Steel is available in black, silver, and gold finishes.

[Read about smartwatches and cyberattacks.]

Aug. 7 marks the first day Apple's smartwatch is available anywhere other than in Apple's own retail stores. Consumers can now walk into Best Buy stores around the US and snap up the Apple Watch. The wearable is also listed for sale on Best Buy's website.

Best Buy is selling the entry-level Apple Watch Sport and the mid-range Apple Watch. The high-end Apple Watch Edition is not available from Best Buy. Pricing for the Sport starts at $349 for the 38mm size and $399 for the 42mm size, while the Watch costs $549 and $599 for the 38m and 42mm sizes, respectively.

Best Buy's web site offers a wide selection of straps and colors, but there's no word on what the selection will be like in Best Buy's brick-and-mortar stores.

Eric is a freelance writer for InformationWeek specializing in mobile technologies. View Full Bio
We welcome your comments on this topic on our social media channels, or [contact us directly] with questions about the site.
Comment  |
Email This  |
Print  |
RSS
More Insights
Webcasts
Cloud Security Threats Enterprises Need to Watch
Linking, Orchestrating, and Managing Your Enterprise Security Systems
More Webcasts
White Papers
NetFlow vs Packet Data
[Exclusive InformationWeek IT Trend Report] The Cloud Gets Ready for the 20's
More White Papers
Reports
Can You Spare 10-12 Mins to Help Us Out with a Survey on Tech Trends?
Got 7 Minutes? Dark Reading Needs Your Help With Our Survey on Incident Response
More Reports

For iOS and Android, at least it's the case for now. To develop iOS App, you need Mac OS X and XCode IDE from Apple. To develop Android, another batch of tools (JDK, Eclipse, ADT, etc.) are needed. The language used is also different - iOS uses Objective C while Java is used for Android.
Reply  |  Post Message  |  Messages List  |  Start a Board

I don't see a reason for one, either. Especially if Pebble must also be synched with a phone and since all apps are available on phones.
Reply  |  Post Message  |  Messages List  |  Start a Board

The wearable wars begin! While I don't see a reason to use one of these (much less wear a watch at all) I think there is going to be a growing market for them.

Smartwatches need really cool apps to be successful. That hasn't happened yet, but that also doesn't mean it wont't. I'm pretty sure it will someday.
Reply  |  Post Message  |  Messages List  |  Start a Board

Is the Pebble also linked to another device like the Applewatch needs to synch to an iphone?
Reply  |  Post Message  |  Messages List  |  Start a Board
Editors' Choice
Hot Topics