50%
Tweet
Research In Motion hints at the future of the BlackBerry as it shares a hardware reference platform device with a big screen and the latest version of BB 10 operating system.

Research In Motion will provide a new hardware reference platform, called Dev Alpha B, to developers attending BlackBerry Jam, the company's developer conference taking place this week at the San Jose Convention Center. This device supersedes Dev Alpha A, provided earlier this year at BlackBerry World, and it is running the latest version of BlackBerry 10, the QNX-based mobile OS do-over. A final version of BB 10 is still not expected until early 2013.

RIM gave us an early look at the new hardware, but not many details. Dev Alpha B is just a reference hardware platform, Michael Clewley, RIM's director of handheld software product management, emphasized. And yet RIM is the only company making BlackBerry hardware, so it's difficult not to want to project the reference platform onto future devices. It's big--at least as big as the 4.2 inches the Dev Alpha A was said to be, very square, and its display was impressively bright (the Dev Alpha A reportedly had a high-resolution display, with a pixel density to rival or beat the iPhone 4S, a dual core processor, 1 GB of internal memory, and microSD, microUSB, and microHDMI hardware interfaces). RIM did not reveal hardware spec details despite our requests.

If it's nothing like what a new BlackBerry phone might look like, it was perhaps just another chance for RIM to say: "See, we're making progress." 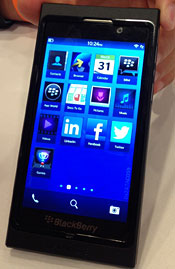 A look at the home screen.

RIM also continued showing off some of the magic of BlackBerry 10, which RIM is counting on to rescue the company from obsolescence, irrelevance, or just simply diminishment, take your pick. And by putting even more hardware in the hands of developers--the company claims the Dev Alpha A went to some 5,000 developers--RIM hopes that this lengthy wait BlackBerry fans have been forced to endure will have been worthwhile, thanks to what RIM predicted will be the healthiest app store of any new mobile OS launch.

BlackBerry 10 is certainly a more modern mobile operating system, built from the ground up to be a touch-screen experience, whereas touch felt like an afterthought in previous BlackBerry operating systems. RIM seems to be betting on a few key nuances for success: a user experience the company calls "flow," a focus on the enterprise, and building on the foundational element of communication. 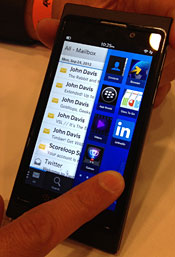 Go with the Flow.

"Flow" promises to get end-users beyond hunting for and launching apps, and attempts to create seamless transitions between screens, apps, and messaging (or, more broadly, communication). Like with the BlackBerry Playbook, it's fairly simple to task-switch between running apps: Using what RIM calls an "active app grid," just a quick swipe up from the bottom of the device and you've got a screen of your running apps. Those apps are, essentially "live" or active.

The user experience does feels like one organized stack of cards: Peek underneath an app, and you can see your notifications--and it's really a peek, rather than a whole new screen, as if you're peeling back a page to see what's underneath. Peek from an app (slowly swiping to the right) and you're at your universal inbox.

It's difficult to know how far RIM will take this, but it seems like a creative way to maneuver through functions on a smartphone. Time will tell whether it's just a neat new idea, or truly useful way to navigate. Clewley said developers would have access to these flow experiences. 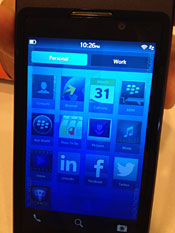 RIM has also embedded the concept of BlackBerry Balance into BlackBerry 10's core OS experience. Balance provides the ability to separate personal applications and data from those for work. Right from the BlackBerry 10 home screen, using a pull-down from the top of the screen, you can see which mode you're in, and quickly switch between modes. Apps that are designated as corporate, or work-related apps, pushed by admins from the BlackBerry Enterprise Server (BES), have a miniature briefcase icon for clear indication. Administrators can prevent copy/paste between those two sides.

BB10 hasn't just been delayed from late 2012 as the article states, but also from late 2011 and early 2012. This, therefor, is the third delay, comprising an entire year. Possibly, if it did arrive in late 2011, in good condition, it would have stood a fair chance. But a year later just has it competing with systems that are even more entrenched. For example, the iPhone has pushed it from the number one spot in corporations. Where will it be in the several months it will take to get this out?

They keep talking about security, as though this was the be all and end all. But studies have shown that most corporations, and even government agencies don't now take advantage of all the security features of the BB. Meanwhile iOS and even Android have been improving their security. Corporate is now a lost cause for RIM. Consumers don't need these features, and wouldn't use them if they did.

They are missing the holiday shopping season, which Heinz dismisses as though it doesn't matter, stating that their partners prefer them to, in a blatant lie. It is similar to the one Lazarius told us in early 2012 when pushing the introduction back to the late year, explaining that they were waiting for a "chip" for their phones, and that otherwise, the OS was ready.

Who is going to believe RIM anymore? Their Playbook intro was a major disaster, and still is, giving transparent excuses as to why it needed to be tethered to a BB phone for basic needs such as mail and contacts.

Whatever this will be, even assuming it does arrive in the first quarter of 2013, it will end up being too little and too late.
Reply  |  Post Message  |  Messages List  |  Start a Board

RIM's focus must be on getting something new to market and making it to be relevant. Otherwise they are better off selling their assets as long as they are worth something.
Reply  |  Post Message  |  Messages List  |  Start a Board

"The user experience does feels like one organized stack of cards" ... wow, so it sounds like RIM is stealing ideas from webOS.

"Time will tell whether it's just a neat new idea, or truly useful way to navigate." - this isn't a new idea, again, Palm was doing this years ago.

What's old is new again... will it save RIM? Didn't do much good for Palm or HP. Only time will tell.

I am very, very eager to see what RIM has to offer. Yet don't know if I can wait mch longer....
Reply  |  Post Message  |  Messages List  |  Start a Board
Editors' Choice
Hot Topics