Ever get the feeling you'd been cheated? Well, sometimes it helps to check your feelings.

In an article entitled "AT&T rolls out monstrous 30GB, 40GB, and 50GB shared data tiers starting at $300 monthly," The Verge described several new shared data plans that start at $300/month (with unlimited talk and text included on all tiers). That's right: $300 a month.

A good thing these aren't consumer plans. They're for small businesses.

AT&T's own press release on the subject begins with the words "AT&T is helping businesses 'raise the productivity bar' with expanded choices of shared data plans." (Their consumer-grade plans start at 1GB for $40 and go up to 20GB for $200.)

Other folks have picked up on the story -- e.g., the broadband-watchdog site Stop the Cap, which claimed that moves like this would be a major disservice to rural customers. "A family watching Netflix consuming 45GB of usage on AT&T's DSL service pay as little as $15 a month for broadband," wrote Stop The Cap's Philip Dampier.

"With AT&T's wireless Internet service, that same family will spend a prohibitive $500 a month." (They wrote before, critically, about how they claim AT&T's solution to broadband access for people in rural areas is ostensibly going to be wireless.)

The problem of high-speed internet access for people in underdeveloped areas isn't a trivial one. But it doesn't help anyone to conflate too many issues.

First: Business and consumer plans exist separately for a reason.

Granted, consumer demand for mobile data is going nowhere but up. What was a "business-grade" plan five years ago is well within the realm of what a "consumer-grade" plan is now. But that also needs to be tempered with realism: if you only have or can afford 2GB of mobile data, it makes sense to confine your high-consumption behavior to home Wi-Fi connections or hotspots. Businesses want and need constant, uninterrupted service. Consumers want that too, but it's going to be hard to convince providers to give it to them at less cost without giving up something.

That said, AT&T also provides tools for managing data use on the plan, such as alerts when certain usage thresholds are met (65 percent, 90 percent and 100 percent). That way, at least if you wind up making short work of your monthly allotment, you'll know about it.

What about the possibility of offering exclusive bandwidth deals for certain high-traffic providers -- for instance, paying another $5 a month to allow your AT&T consumer wireless account to stream all traffic from Netflix without a cap? There's a part of me that balks at the idea: It sounds too much like preferential treatment (shilling for "net non-neutrality") for my taste. But it might be one of the few other ways to deal with the problem that consumers might actually spring for, barring buying a full-blown business plan or an "unlimited" data plan.

Second: "Unlimited" data never will be, and never was to begin with.

Many of the folks who read announcements like this usually take a moment to lament the death of the unlimited mobile data plan. I was one of those people myself, until I realized what we call an unlimited plan isn't what, say, T-Mobile calls unlimited. "Unlimited" anything plans never are -- they're just plans designed to encompass everything but the 99th percentile of usage. The limits do exist, but are typically set high enough that most people never blunder into them -- and when they do, the usual response is to throttle the connection temporarily. 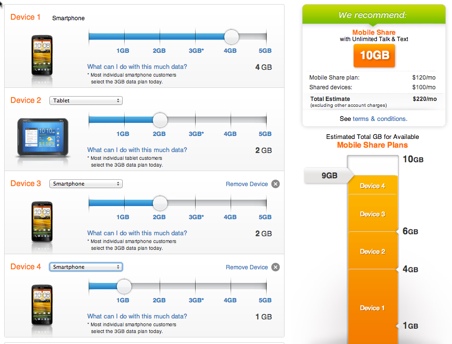 I ran into a variation of this with my Web hosting company, where I keep a blog on an account that has "unlimited" bandwidth and storage. (I use about 2.2 GB of bandwidth a month and about 2.6 GB of disk space.) The other month I got a notice from them that the inode usage on my account, set to a soft limit of 300,000 for any given account on my tier, was tipping the scale at 456,078 inodes. Turned out a mail account on my system somewhere had become a target for spammers, and some ungodly number of spam messages were accumulating in a folder I never poked my nose in. I cleaned out the folder and deleted the account for good measure (it wasn't like I was using it, anyway), and the warnings went away.

But the whole experience reinforced something I'd suspected all along: what is called and sold as "unlimited" never is, and in a practical sense simply can't be. A better way to advertise this sort of thing would be "soft-limit" -- you don't hit a wall, but it's more like you start slogging through molasses.

Now, given a choice between hard limits and soft limits, I'll take the latter. It's nice to not have a door slammed in your face (or on your foot). But soft limits are still limits, and the throttling that takes place in such circumstances makes them that much less useful for video-on-the-go or other latency- and bandwidth-sensitive things.

There's also evidence that unlimited usage plans may not really make that much of a difference in terms of consumer habits anyway. Last year, Validas (a wireless analytics company) crunched some numbers and found that the differences in usage patterns between limited and unlimited plans were not that profound -- that the "unlimited" users were using, at most, about 25 percent more data than their tiered counterparts. This same study has also been cast as an argument against throttling: If there's no real difference, why impose a cap in the first place? My take is that it makes the overall costs of the system manageable for everyone. Without some form of segmentation of usage, it becomes unwieldy in the long run to give everyone a one-size-fits-all deal.

I don't think tiered plans and segmentation are going away, especially not on the business side of things. They provide a convenient way for a company (or a family) to aggregate the cost of their bandwidth into one bill. But I also don't think pressure to keep unlimited plans in some form is going to vanish, either -- even if what is offered through them is entirely symbolic.

We welcome your comments on this topic on our social media channels, or [contact us directly] with questions about the site.
Comment  |
Email This  |
Print  |
RSS
More Insights
Webcasts
5 Steps to Integrate SAST into the DevSecOps Pipeline
Are You Ready for When Cyber Attackers Get In?
More Webcasts
White Papers
Simplify Your App Security
NetFlow vs Packet Data
More White Papers
Reports
Can You Spare 10-12 Mins to Help Us Out with a Survey on Tech Trends?
Got 7 Minutes? Dark Reading Needs Your Help With Our Survey on Incident Response
More Reports