50%
Tweet
It’s not about this smartphone or that. Most of the really inventive things we do with our devices come from software added either by the phone markers, users or by the value provided through network-based services.

Meet the new phone, same as the old phone.

If it sounds like heresy for me to say that in the wake of the HTC One and the Samsung Galaxy S4, the closer I look at what's supposedly so special about the newest generation of phones, the more I see things that aren't phone features at all.

At both the HTC One and Galaxy S4 events, the manufacturers for each phone took to the stage and pounded their chests about the great photo-taking and organization features sported by the phone.

"But that's all software," I told myself. "That's not the phone per se."

And so it went with just about every other major feature announced with the S4. That snazzy machine-translation system so you can find a restroom in Köln or a subway stop in Tokyo? Software. The exercise and diet management tools? Software, with a generous dose of add-on hardware that in theory could work with any phone.

Phones have started to peak in more ways than one. The number of things we can effectively cram into them may continue to inch up each year (look, the S4 has a temperature and humidity sensor!), but the amount of actual innovation that comes from such feature-cramming is minimal, and battery life — every phone's Achilles heel — remains stagnant.

Besides, most of the really inventive things we do with phones don't come from those gizmos anyway. They come from software added either by the phone markers or by the users — or by the value provided through network-based services. I'm not even touching on the larger question of whether those features are real value-adds or just toys.

When the most loudly-touted new features of a phone are all software, there isn't a thing in the world — short of maybe a patent lawsuit — stopping a given software-based feature from appearing in most any phone that has the hardware to make it happen. And given how the hardware bar for phones has been raised so much in recent years (quad-core processors, 1080p playback, you name it), there's very little a recent-model smartphone can't do with the right software. 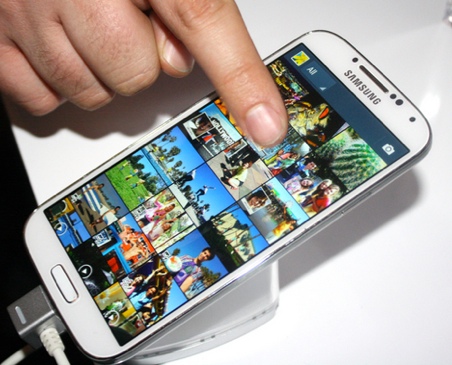 Samsung knows this full well. When PC Magazine's Sascha Segan talked to Nick DiCarlo, Samsung's VP of portfolio planning, he admitted as much: "Anything that we can do that's not dependent on hardware like infrared, we'll definitely bring to all the flagship devices." The real problem as I see it is, again, not the further fragmentation of Android (as Segan hinted at, and was quickly rebuffed for doing so), but whether this means phone hardware has become a game of diminishing returns.

And all signs show it has. There's only so large you can make a screen before the device it's mounted in becomes unwieldy, so you turn to cramming more pixels into the display — which, in turn, has practical limits as well. (Would we really need 2560 pixels across on a five-inch display?) You can only cram in so many cores before battery life begins to tank, even with all the optimizations that can be thrown at them. There's only so many sensors that can be included before the data they harvest becomes redundant, spurious or a privacy concern.

Eventually, it stops becoming about the device and more about the usage — something empowered most directly through software and connectivity, not hardware.

I suspect this is a big part of why Apple resists packing current- and bleeding-edge stuff into the iPhone. It knows that the broadly consumer-oriented user base it caters to cares less about what's new than what works, and its job is to make it all work as seamlessly as possible. Hence, I suspect, there will be no fingerprint reader for the iPhone 5S: There's no existing broad-deployment consumer use case for it, and thus, nothing to polish. Your average, relatively tech-indifferent iPhone user is not exactly out there raising a stink about the lack of a fingerprint reader. He's more likely to be raising a stink about lousy battery life.

Further proof of how most of what makes a phone is its software stack was supplied by a friend of mine, a Galaxy S3 user whom I met with after the Samsung demo. He'd recently rooted his S3 and replaced the stock ROM with CyanogenMod 10, and had nothing but good things to report about the experience. Not only did he get a more responsive UI and better battery life, he even got a better and more consistent phone signal — he's now able to talk on the phone while riding the eight floors up in the elevator to his apartment. The stock S3 ROM couldn't even find a signal there. But most people aren't in the habit of rooting their phones, and so they will gamely turn to the next iteration of the Galaxy for the things they think they can only get with a hardware upgrade.

I shouldn't make it sound like there's no reason at all to rev the S3. Few people are going to complain about each successive generation of smartphones being that much more superbly engineered, that much skinnier and lighter and more durable. I know I was eyeing, say, the HTC One's aluminum chassis and thinking something like that would be a great fit for a butterfingered spaz like me.

But the allegedly oh-so-cutting-edge Blink Feed home screen app — that's software. Same with the vast majority of the goodies I saw in the S4. Software. Anyone can do those things.

And by the time I'd walked out of Radio City Music Hall — where, oh irony, HTC publicists had been leafleting the line outside — I suspected someone else is already doing feature copying in software.

We welcome your comments on this topic on our social media channels, or [contact us directly] with questions about the site.
Comment  |
Email This  |
Print  |
RSS
More Insights
Webcasts
5 Steps to Integrate SAST into the DevSecOps Pipeline
Cloud Security Threats Enterprises Need to Watch
More Webcasts
White PapersMore White Papers
ReportsMore Reports