50%
Tweet
The zBoost redirects strong outside cell signals to inside your house or office. It's not a cure-all for weak signals inside buildings, but it gave my connections a much-needed boost.

If you're plagued by perpetually weak cell phone reception in your home or office, Wi-Ex might have an answer. It's one of a number of companies that make signal-redirection products for cell phones. The antenna-and-base-station systems take the signal from outside your building or residence and redirect it to the inside.

Wi-Ex's zBoost works in a variety of environments--home office, urban apartment, basement--to allow outside cell phone signals to be piped into a place where they normally don't reach.

My house seemed to be a good test case. I live at the foot of a hill facing a bay, with the nearest cell tower behind that hill, and so my cell phone rarely gets more than two bars of signal. I found that although you can't magically make five bars out of one with the zBoost in such a scenario, you can get a measurable increase in signal strength and reliability. 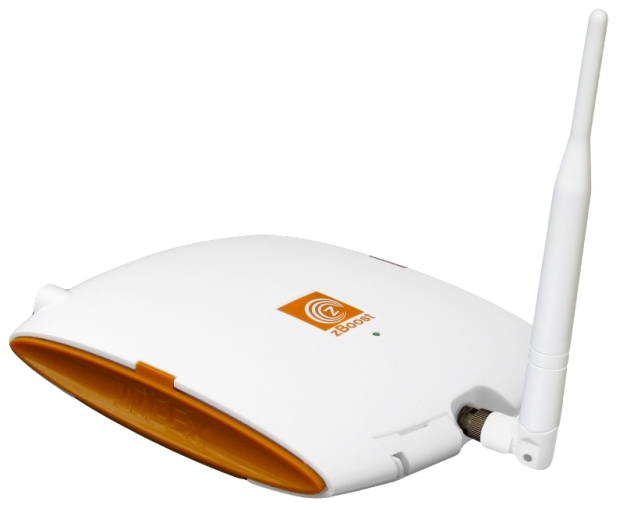 The zBoost comes in different versions for different environments. The model we tested, the zBoost SOHO YX545, is designed for residential and suburban areas, and covers up to 3,000 square feet, but requires at least 15 feet of vertical separation between the antenna and the base station. For tighter surroundings, such as an apartment or office, there's a Metro model, which needs no vertical separation to work, but only covers 1,500 square feet. Other models include an in-vehicle edition and a single-room edition.

Setting up the zBoost mostly involves finding good placement for the signal antenna and the base station. The signal antenna's attached to the base station by a 50-foot coaxial cable, which the instructions recommend being placed as high as possible in your building. (I used a dormer room.) An included wall bracket allows the antenna to be mounted vertically.

Apart from orienting the antenna and base station, there's no other configuration needed; the Zboost is plug and play. A single LED indicator on the top panel of the base station tells you the status of the unit: solid green equals working; flashing red and green means you need to move the antennas around; and solid red means a bad signal or a hardware malfunction.

The single most complex part of my setup was making sure the base station was 15 feet away vertically from the signal antenna, to keep the two antennas from polluting each other's signals. It does make a difference: Until I did it there was no discernible change in the cell signal in my house. I ended up running the coaxial cable downstairs into my living room and placing the base station there. The included antenna is omnidirectional, but a separately-sold directional antenna lets you harvest signals coming from a specific direction--for instance, if know where your local cell tower is.

The difference a zBoost makes is highly variable, and depends on how much cell signal you have to begin with. The signal near my house is extremely weak--around -115 dBm on average, but often with no signal at all. After I set up and tweaked the zBoost, the signal strength averaged around -103 dBm, with occasional spurts up from that. Most encouragingly, I stopped experiencing complete loss of signal. The folks at Wi-Ex supplied me with a more robust coaxial cable to see if that made a difference, and I got a slight but measurable bump from using that as well.

Because the zBoost SOHO shouldn't be thought of as a magic fix for a poor cell signal, do some research on the kind of signal you're trying to redirect before dropping the $399. If you've got good signal outside but bad signal inside, this is what you need.

This cell phone signal redirection system helps bring strong outside signals inside hard-to-penetrate buildings. Not a cure for all cell signal issues, but a good help for many of them.

Price: $399
Pro: Con:
We welcome your comments on this topic on our social media channels, or [contact us directly] with questions about the site.
Comment  |
Email This  |
Print  |
RSS
More Insights
Webcasts
Building an Incident Readiness and Response Playbook
Linking, Orchestrating, and Managing Your Enterprise Security Systems
More Webcasts
White Papers
NetFlow vs Packet Data
[Exclusive InformationWeek IT Trend Report] The Cloud Gets Ready for the 20's
More White Papers
Reports
Can You Spare 10-12 Mins to Help Us Out with a Survey on Tech Trends?
Got 7 Minutes? Dark Reading Needs Your Help With Our Survey on Incident Response
More Reports