Big banks aren't on board yet. But the infrastructure's being put in place, and Cingular is about to turn up the heat. 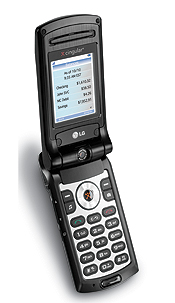 Mobile phone banking has yet to hit the United States, but look for a big push in the coming year, as customers already used to online banking buy faster, smarter cell phones and get accustomed to doing more data-intensive tasks on the go. Most banks, though, have a long way to go to provide what customers will soon expect.

Cingular Wireless, the largest cellular service provider in the United States, is trying to kick-start the market through a partnership with software vendor Firethorn Holdings that will let Cingular customers pay bills, check balances, and transfer funds on their cell phones. The Firethorn application sits on a cell phone and connects with Firethorn’s servers, which then communicate with the banks’ systems. Cingular expects to make the service available early next year, but Firethorn isn’t saying if it has any banks signed up.

Synovus, a midsize bank and insurance company in the Southeast, plans to let select customers do mobile banking by the second quarter of next year, with a broader rollout later. It initially will provide bill viewing, bill payment, and money transfers; future services likely will include person-to-person payments, says Garry Hedges, director of payment strategy. "The next generation of banking customers isn’t going to conform to traditional channels of branch banking," he says.

Synovus expects Firethorn to strike partnerships with other cellular carriers, and it will use one of their networks to provide the service to customers. Hedges doesn’t think it will take much IT infrastructure work to deliver data to mobile devices, since the offering will rely on the same service-oriented architecture that Synovus uses to deliver data for Web banking.

An alternative to Firethorn’s approach of putting software on a phone is a system from ClairMail that uses text messages to request and present account data and alerts. ClairMail expects to have several financial industry customers to talk about early next year. PayPal earlier this year launched a service that lets people transfer funds from their PayPal accounts to another person using text messages. The payer messages PayPal the transaction amount and the recipient’s phone number, then PayPal contacts that person with details on how to get the funds.

The ramp-up of mobile banking likely will be similar to Web banking, which took off once a critical mass of people had home computers and broadband Internet access. About 35% of U.S. households use online banking, a Forrester Research survey in January found. The pieces are falling into place to enable mobile banking: Major U.S. cellular carriers are upgrading their networks to deliver faster data speeds, and cell phones are getting faster processors and Web access. U.S. smartphone shipments numbered 38.5 million in the first half of this year--75% higher than a year ago.

There are security concerns, same as there were for online banking, but with the added worry that it’s easier for a cell phone to be lost or stolen. But most data won’t reside on the phone. Cingular says customers will have to enter a two-part identification number before they can access their personal data, and it will offer a "wipe" function for wirelessly deleting data from the cell phone. Synovus plans to meet the same authentication requirements it has for Web banking and to ensure that customers’ account information isn’t stored on cell phones.

SO WHEN DO THE BANKS SIGN UP?
Wells Fargo began offering customers wireless account alerts earlier this year and has launched pilots for mobile payments and banking with its employees. Customers can sign up to have E-mail alerts for their checking, savings, and credit card accounts sent to three E-mail addresses and one mobile device, helping them stay on top of account activity. The bank has just started researching whether it makes sense to offer account balances, funds transfers, and bill payment using cell phones.

A number of large banks seem more intrigued by the idea of using cell phones as a means of payment than for accessing account information. JPMorgan Chase, the third largest U.S. bank, declined to discuss its plans for mobile banking. Instead, the bank, along with several others, is focused on getting "contactless" payment off the ground using Near Field Communication, a wireless technology for short-range communications between electronic devices.

A notable test of NFC for mobile phones began last December at the Philips Arena in Atlanta, where 150 fans with Chase-issued Visa credit accounts and a Cingular subscription paid at concession stands using their phones. The trial ended in September, with Visa concluding that transactions using contactless technology were up to 25% faster than with cash. Visa’s also testing mobile devices to deliver coupons, digital receipts, and bank account information through text messages, says Michele Janes, director of Visa’s product innovation group.

MasterCard’s first NFC trial, three years ago in Dallas, hit a snag, as banks had to manually load account information onto each cell phone before distributing them to participants. In a six-month trial launched this month, participants could activate MasterCard’s PayPass application remotely, through a third-party service using the cellular network, on Nokia 3220 phones. "The future vision is to have a person buy a phone in a store and, just like you have Bluetooth or infrared, it will have the feature for contactless communication," says Oliver Steeley, VP of mobile and wireless at MasterCard Worldwide. About 500 people are taking part in a trial using 7-Eleven’s Speak Out prepaid wireless service and Nokia mobile phones to make purchases at one of 32,000 stores that accept MasterCard PayPass.

Another challenge to contactless payment is persuading wireless telecom providers to buy in, since it’s those companies that tell cell phone makers which features they want bundled on a phone. Today, MP3 players are what’s hot. "The carriers are still looking for a business case," says MasterCard’s Steeley. "It will take the issuing banks and carriers a reasonable part of 2007 to carry out the trials."

Whether it’s banking or payment by mobile phone, that’s a familiar refrain: 2007 is the year to iron things out. Banks shouldn’t take too long. With more than a third of U.S. homes already using online banking, the learning curve won’t be steep for the mobile variety. Once customers start moving their digital lives to mobile devices, they’ll expect banks to let them keep their money there, too.

We welcome your comments on this topic on our social media channels, or [contact us directly] with questions about the site.
Comment  |
Email This  |
Print  |
RSS
More Insights
Webcasts
Tuning your Data Storage Strategy to the Hybrid Cloud
The Death of Network Hardware Appliances and the Evolution of Cloud-Native Architectures
More Webcasts
White Papers
How to Plan for Endpoint Security Against Ever-evolving Cyberthreats
How five organizations are elevating WFH into a long-term strategy
More White Papers
Reports
2021 Digital Transformation Report
Future Proofing Your Network for 5G
More Reports