6 Ways To Turn Your iPad Into A Laptop - InformationWeek

Apple says it won't make tablet-laptop hybrids, but these add-on products will turn your iPad into a work-friendly machine.

Apple CEO Tim Cook said this week that he has no plans to introduce an iPad that can transform into a laptop, and he took a swipe at such hybrids from Microsoft and partners when he called them an ungainly cross between "a toaster and a refrigerator."

But just because Apple doesn't intend to release an iPad hybrid, that doesn't mean you can't produce your own, DIY version--with a little help. There are a number of aftermarket solutions available that, when combined with Apple's own wireless technologies, give the iPad the look and feel of a laptop. Here's an overview of some of the more interesting ones in what's sure to be a growing market. 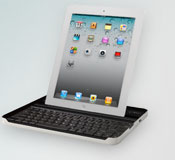 1. Logitech Zagg keyboard case. Logitech has partnered with accessories maker Zagg to create iPad protective cases that embed a stand and keyboard. The latest case from the duo, for the new iPad, features aircraft-grade aluminum with an anodized finish to match the tablet's exterior. The keyboard synchs with the tablet through iPad's Bluetooth radio. Logitech and Zagg also make keyboard cases for the original iPad and iPad 2 (pictured). The whole setup will add about 12 ounces to your iPad.

2. Brydge iPad Laptop. Brydge is a startup that's building capital through the Kickstarter crowdfunding site, and given that it's already amassed $187,000 in funds through 892 backers, it appears to have a winner. Its iPad laptop solution is an Apple-logoed clamshell with keyboard and speakers on the bottom half and an empty frame on top, into which the iPad snaps. Both halves are linked by a patent pending hinge. The solution makes the iPad appear to be a real laptop, and, according to the builders, Brydge's casing is "machined and anodized so that it matches the look and feel of the iPad precisely." A pledge on Kickstarter of $250 or more will get you a unit. 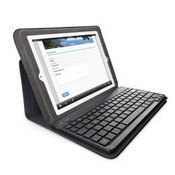 3. Belkin Keyboard Folio. Belkin's line of combination Bluetooth keyboard/backrest folios for the iPad provide a fast and light way to get your iPad into a laptop configuration. These feature Belkin's TruType keys, which the company says mimic the size and responsiveness of a full, laptop keyboard as opposed to "flimsy rubber keyboards." The keyboard can also be tucked away so that the Folio functions in stand-only mode. Belkin says battery life for the system is 60 hours.

4. Incase Origami Workstation. One of the more elegant setups we've seen, the Origami Workstation is, according to Incase, "inspired by the Japanese art of paper-folding." Indeed, the unit can fold so that the iPad rests either horizontally or vertically, and the keyboard itself can be tucked away when not in use. The product does not come with a keyboard, but it accommodates a wide range of iPad-compatible wireless units from a number vendors.

Comment  |
Email This  |
Print  |
RSS
More Insights
Webcasts
Key technology trends in 2021 - Making these technologies work for your business
Zero Trust for a Work-From Home World
More Webcasts
White Papers
Why Add Security to Your Skill Set and How to Do It
5G-Enabled Edges of Tomorrow Require Converged Network and Security
More White Papers
Reports
The State of Cloud Computing - Fall 2020
Special Report: Edge Computing: An IT Platform for the New Enterprise
More Reports

Why? Isn't that like converging a fridge with a toaster? Who in their right mind would do that??
Reply  |  Post Message  |  Messages List  |  Start a Board

With the number of sites Flash enabled, there is a lot I cannot do with the iPad alone such as some online stores, jobs/placement agency sites, and many others.
Reply  |  Post Message  |  Messages List  |  Start a Board

The ipad right now is like that old VCR that is rotting away at the garbage dump if we are comparing things. It lacks a lot of key features in everyday use. I want a all in one device and the ipad leaves you having to use multiple devices do to Apples iDont product.
Reply  |  Post Message  |  Messages List  |  Start a Board