50%
Tweet
Ultraportables used to sacrifice too much performance. They're beefing up on features--not weight.

But 30% of 687 company PC buyers surveyed by Forrester Research expect to increase buying ultralight laptops in the next two years, while just 4% expect a decrease. Laptop makers have made significant improvements in newer models, with faster processors and more system memory, plus batteries that can, in some cases, keep a laptop running for up to 12 hours on a single charge. And they're packing in more features--especially ones focused on mobility.

Fujitsu Siemens Computers, for example, will bring to market in August a new line of ultraportable laptops, the Esprimo Mobile Series, with integrated 3G. With a 12.1-inch or 14.1-inch display, they'll have built-in Universal Mobile Telecommunications System, or UMTS, technology, a 3G standard that allows Internet connections of up to 2 Mbps. That kind of embedded technology is what businesses will increasingly want, as employees grow dissatisfied with spotty Wi-Fi access via public hotspots, according to Yankee Group.

So what are the options today for mobile pros who want to go ultraportable? Here's a buyer's guide to some of the top choices. 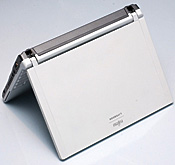 The LifeBook P7230 doesn't sacrifice battery life for a smaller frame, says Fujitsu. Its built-in modular bay can accommodate a second battery, for more than nine hours of computing time. Battery life can also be extended with the ECO button, Fujitsu's power-saving mode that disables the optical disk drive and reduces display brightness.

The laptop's major drawback is its single-core processor, the Intel Core Solo U1400, which puts many restrictions on performance. 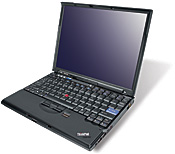 The ThinkPad X61s is another ultraportable laptop that addresses battery life problems. Introduced by Lenovo in May, the laptop offers more than 12 hours with an eight-cell standard battery and optional extended battery life function. Lenovo's new Battery Stretch control can extend battery life by 15% when functions are disabled in the Power Manager ThinkVantage software.

In addition to a 12-inch display, up to 4 Gbytes of system memory, and a 160-Gbyte SATA hard drive, the ThinkPad X61 is powered by Intel's Core 2 Duo low-voltage processor. Mobile users also are likely to find the different options for wireless connectivity invaluable, including the wireless wide area network, along with the more common wireless location area network, Ethernet, Bluetooth, and modem.

The ThinkPad X61s doesn't come with a built-in optical drive, so if you need to run CDs or DVDs, having to carry an external drive around makes it less portable.