Let's recap. In Part I we introduced the idea of a capability maturity model (CMM), and noted that creating a CMM for social media is difficult because the entity that is "acquiring" the capability, the twentieth-century firm, might not even represent the right way to organize your economic activities. Anything from a nonprofit to a self-organizing crowd with no legal status might be the right organizational form for your sector, not just "enterprise 2.0." This is the sort of change Chris Anderson is talking about in Free: Why $0.00 is the future of business, and what Kevin Kelly is talking about in his recent essay "Better than owning." This is not gentle evolutionary "keep-up" pressure. It is a mega-speciation event of new organization forms. So a CMM for social media must go well beyond telling you how and when to adopt social media and what "stage" you are at. It must also tell you what sort of species you ought to morph into. So, in Part II, let's now zoom down to the extremely detailed level. I'll show you how you can get a sense of where you are now. Get out your favorite spreadsheet program and your organization chart. Identify the functional organization of your enterprise (roughly, the major clusters of the lowest level of your org chart), and create a matrix with each function listed along both the rows and columns, like so (try to get adjacent functions on the org chart, which traditionally interact a lot, next to each other in the matrix; so sales ought to be next to marketing):[caption id="attachment_1283" align="aligncenter" width="376" caption="Figure 1: Basic matrix, functional"] 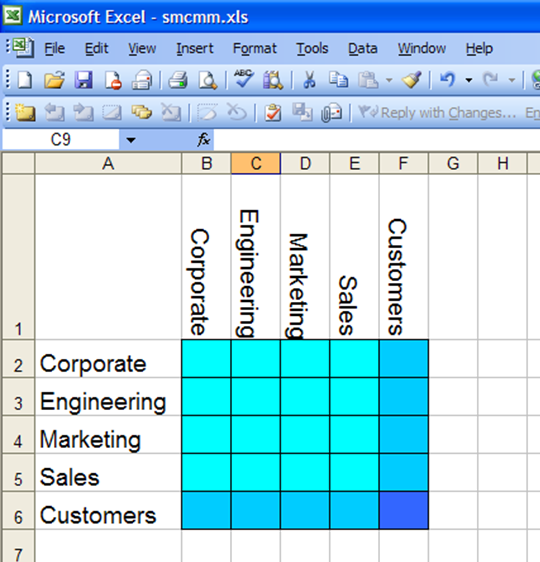 [/caption]Add an extra row and column labeled "customers." Done? Customers represent an economic function (buying your stuff) that falls outside the boundary of your organization. Color-code the cells as shown, to distinguish various bits of the ecosystem. What have we done? We've created a canvas on which we can plot the social media activity going on in your enterprise. You don't have to get too formal, since what I am going to describe is a right-brained visualization process, not a left-brained analysis activity. Why do we need a symmetric two-dimensional canvas? Because social media are social, which means they involve at least 2 parties communicating (even if it is me talking to myself via a Google doc). They impact dynamics both inside and across functions. This matrix represents a "squash down and squared" projection of your org. chart. Let's also squash-and-square things sideways, and create a second matrix. For variety, here I've added a second "outside your borders" ecosystem player: your company's alumni.[caption id="attachment_1286" align="aligncenter" width="359" caption="Figure 2: Basic matrix, hierarchical"] 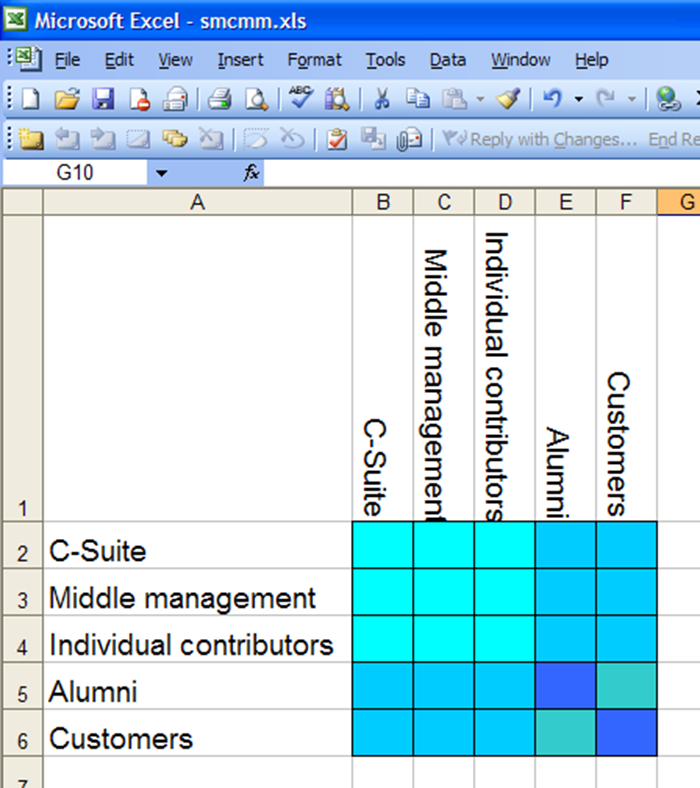 [/caption]Yes, you could create other matrices for dimensions like generational cohorts or global regions, but you get the idea. Ready? Now let's go looking for data to populate our matrices. Many CMMs assume that transformations will happen when a single passionate champion gets air cover from a single powerful C-Suite executive and goes about creating change. But organizing capability innovations don't work that way. What happens is that change bubbles up all over the place as people start experimenting. It is hard to evaluate this large-scale experimentation through the lens of "process improvement" (aka "ROI") because processes are artifacts that emerge from how you are currently organized. Social media primarily provide new ways to organize. Improving your current organizational model only makes sense once you've figured out if you are actually going to stick to it. We'll specific examples in a minute, but for now, start by looking at the actual data that is emerging. It is going to be primarily anecdotal. Make a list, like this, capturing every instance of social media activity around a specific technology installation (count each instance: sales and engineering using separate instances of Wordpress count as two anecdotes). You can add columns for any additional data you want to capture, including instance champion, any analytics you can find and so forth. Realistically, in a Fortune 500 sized company, it could take you months simply to generate a good list. But don't get hung up on measurements. Aim for just capturing any evidence of activity. Don't forget external activity, like groups forming on LinkedIn and Facebook, or somebody setting up a Yammer account for your company.[caption id="attachment_1288" align="aligncenter" width="406" caption="Figure 3: Anecdotal evidence list of social media tools in use"] 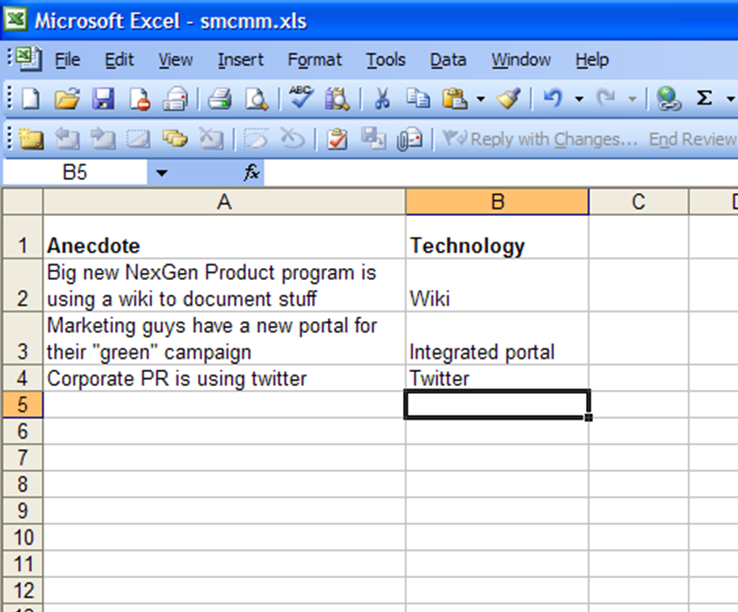 [/caption]For this next step, I have no idea how to do it in Excel. You'll need to print out your matrices (preferably in color, on A3 size paper; yeah, I do work for a printer company after all!) and reach for your colored markers. For each item in your list, put a green, yellow or red dot on your matrices for every type of communication the instance of social media use is enabling. Red means it enables, but is not really effective. Yellow means sorta effective. Green means effective. For example, a simple two-way channel between marketing and the customer base, like a product blog, where marketing is diligently posting, but customers aren't talking back, might show up as a pair of dots, one yellow (marketers talking, but perhaps not effectively) and one red (customers not talking back at all), that appear symmetrically about the diagonal. Plot what's actually happening with sufficient frequency to be called a pattern of activity. There are probably open resources that everybody in your company could use (like an open-to-all blog site), but chances are only some groups are actually using them. Go for the dominant 2-3 user groups in every instance. Here is an example of the sort of diagram you might come up with. Number the dots to cross-reference them to the anecdote they refer to. Remember a single anecdote about a particular platform might yield a lot of dots.[caption id="attachment_1284" align="aligncenter" width="418" caption="Figure 4: Plotting tool use on your matrix"] 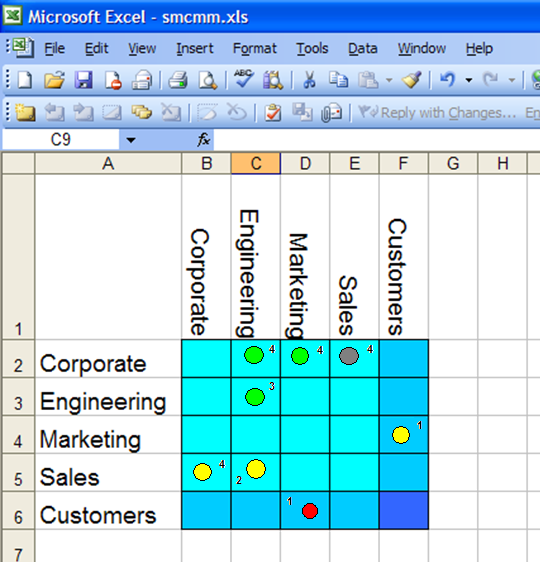 [/caption]Now, here's the point of a diagram like this: any communication pattern sustains itself only if it is creating value. If it is creating value "across the grain," that is, across functional or hierarchical boundaries, it will create organizational stress. A simple example: the yellow dot labeled '2' might represent sales providing reports of field problems associated with a new product launch via a wiki, which is going into a black hole in product engineering. This might create the pressure for a joint sales+engineering product launch evaluation team. Dots on the diagonal, or near the diagonal (if you managed to get organizationally close functions near each other) create much less organizational stress, since they are comparatively "along the grain."Now, repeat the entire process with a list of your pre-2.0 communication channels, including phone norms, normal meeting tracks, typical email reporting patterns, and so forth. Use separate print-outs of the same matrices, but a different list of anecdotes, and use squares instead of dots. You will probably end up with a highly diagonal pattern like this. This particular example illustrates a pathological fear-ridden top-down command-and-control culture.[caption id="attachment_1289" align="aligncenter" width="423" caption="Figure 5: Repeating the process with pre-1.0 communications"] 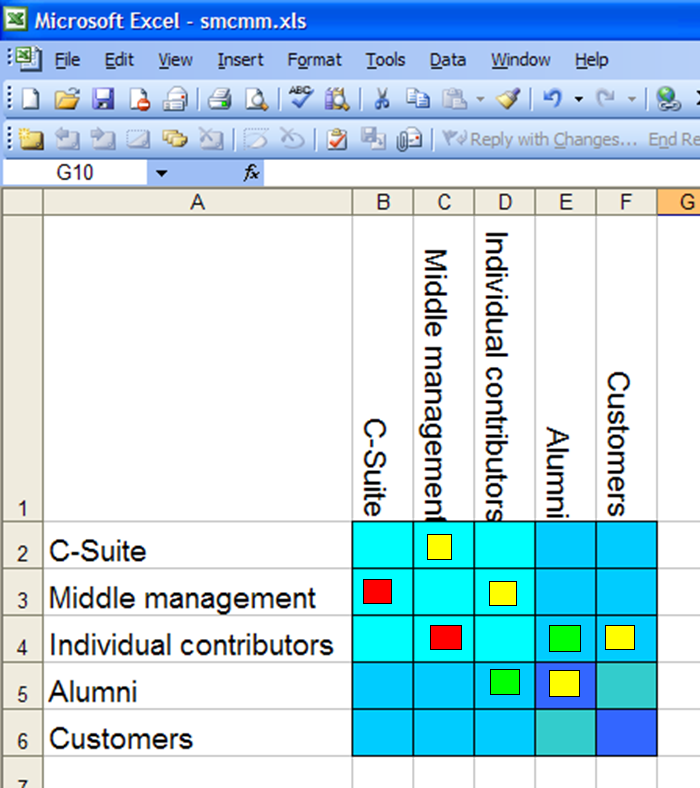 [/caption]Ready for your final diagramming exercise? You need to capture the generalized "SOA" structure of your company -- how different instances of resources talk to each other. This includes things like cross-RSS feeds showing up in widget boxes (a 2.0 style "true SOA" link), to static cross-links and human-mediated "SOA" links, like somebody sending out an email roundup of the latest blog posts on a large distribution list. You could do this on the base matrix itself. For example, in Figure 4, the dots labeled "4" might represent a regular CEO webcast which sales people don't seem to attend in real time, but which seems to show up on the sales-to-engineering wiki (dot labeled "3"). That's a link. Now you could try to draw a line connecting every "4" dot to every "3" dot, but that's just a spaghetti mess. We need a level of abstraction. Draw an integration map like this, with one dot or square for each resource you've documented, with arrowheads showing direction of integration:[caption id="attachment_1290" align="aligncenter" width="330" caption="Communication Integration Map"] 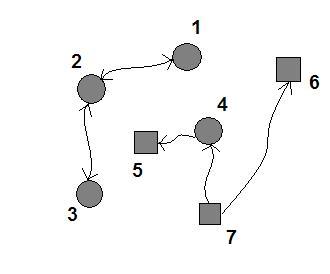 [/caption]Now you've created a good set of visualizations showing you what the current state of your company is like. It shouldn't take you much effort to stare at your patterns to come up with some basic inferences, like:

Next time, we'll take a more structured look at how to interpret these diagrams. Until then, just tack 'em up on your wall or door and stand around near them looking wise. And incidentally, comments very welcome for improvements. This is very much a rudimentary perennial-beta right-brained analysis process. I've used some versions of this before, and each time I try this exercise, I come up with some simplification or improvement. But don't try to make things too simple. We aren't talking about simple things here.Venkatesh G. Rao writes a blog on business and innovation at www.ribbonfarm.com, and is a Web technology researcher at Xerox. The views expressed in this blog are his personal ones and do not represent the views of his employer.
We welcome your comments on this topic on our social media channels, or [contact us directly] with questions about the site.
Comment  |
Email This  |
Print  |
RSS
More Insights
Webcasts
The Threat From the Internet - and What Your Organization Can Do About It
IT Automation: Scaling to the Future
More Webcasts
White Papers
Securing IT & OT in Industrial Environments
Ransomware Response Report: Trends & Outlook
More White Papers
Reports
2020 SANS Cyber Threat Intelligence (CTI) Survey
Cyber AI: An Immune System for Cloud Security
More Reports

Back Issues | Must Reads
White Papers
Securing IT & OT in Industrial Environments
Ransomware Response Report: Trends & Outlook
Get The Key to Cloud Success
Phishing: A Modern Guide to an Age-Old Problem
Better Security Awareness: The Devil is in 5 Details