50%
Tweet
A UK initiative aims to fight corruption by making those at the top of the food chain responsible for the criminal activity of those below them.

Although corruption isn't as problematic in western nations as it is in some developing countries, institutionalism and cronyism are still issues that we face in political and business spheres. Indeed all over the world, corruption is said to cost economies more than $2.5 billion a year, so addressing it is important.

But that's no easy task. 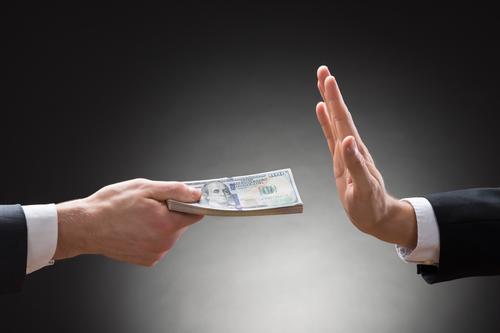 A new initiative is looking to target the practice, though, by making those at the top responsible for any corruption that takes place down their particular food chain.

Announced in the UK by British Prime Minister David Cameron last month at the country's anti-corruption summit, the UK will soon implement a system whereby companies that do not adequately prevent corruption perpetrated by their employees, will face criminal charges. It's hoped that by making those at the top and the entity they represent, responsible for what goes on in their business, it will encourage more safeguards and oversight to prevent it happening.

While this comes at a time when the UK itself is facing questions about its operation of tax havens through places like the Virgin Islands, on surface at least, this idea makes a lot of sense. The question is though, how do you go about making it a reality?

How do you stop corruption at all levels of a business, without putting someone in a position that is easily corruptible because of their enterprise-wide oversight?

Sundeep Tengur, banking fraud and financial crime specialist at SAS (sponsor of this site), believes that a technological solution is the way forward. Funnily enough, it's analytics which he feels could form the basis of an unbiased anti-corruption tool, which could really cut into the amount of fraud and business malpractice all over the world.

“The reason many organizations struggle to combat fraud, is either because they have not yet implemented robust technology systems and processes, or because they have only implemented simple rules-based solutions that can be easily circumvented by increasingly sophisticated fraudsters,” he said in a news release.

However implementing that sort of system is no simple task. Companies would need to begin collecting all sorts of data to make an analytical anti-corruption system viable. They'd need to know a lot about their employees and how they worked, which may mean crossing some privacy hurdles. While there is an on-going debate about how much privacy employees have in the workplace, nobody wants to feel like someone is looking over their shoulder.

That may be the difficult balance that must be struck though: providing enough oversight that corruption is not only difficult to achieve, but is also discouraged, whilst still providing enough personal freedom for employees that they can operate at the best of their abilities.

We welcome your comments on this topic on our social media channels, or [contact us directly] with questions about the site.
Comment  |
Email This  |
Print  |
RSS
More Insights
Webcasts
The Threat From the Internet - and What Your Organization Can Do About It
[Free Virtual Event] Using Microsoft in 2020 & Beyond
More Webcasts
White Papers
Get The Key to Cloud Success
SANS 2019 Threat Hunting Survey Report
More White Papers
Reports
Endpoint Security 2020: The Resurgence of EPP and the Manifest Destiny of EDR
AI-Augmented Attacks and the Battle of the Algorithms
More Reports