Apple CEO Tim Cook struck a muted tone as he kicked off Apple's "Let Us Loop You In" media event. Cook clearly has a lot on his mind, as should any CEO in his position. The event was at times both somber and full of Apple swagger.

Many thought Apple would ignore its encryption fight with the FBI and focus on its new products. Instead, Cook tackled the issue head-on. Cook said many Americans have reached out to the company to voice solidarity with its position. Cook was moved by the show of support.

"We did not expect to be in this position," explained Cook, "at odds with our own government. But we believe strongly we have a responsibility to help you protect your data, and protect your privacy. We owe it to our customers and we owe it to our country. This is an issue that impacts all of us, and we will not shrink from this responsibility." Apple is taking a firm stance and knows its position isn't popular with everyone.

Little did Cook know that the FBI was about to back down from its position. Late in the day the Justice Department asked to move the scheduled March 22 court date to April 5. Why? A third party came forward with a method to unlock the phone in question. 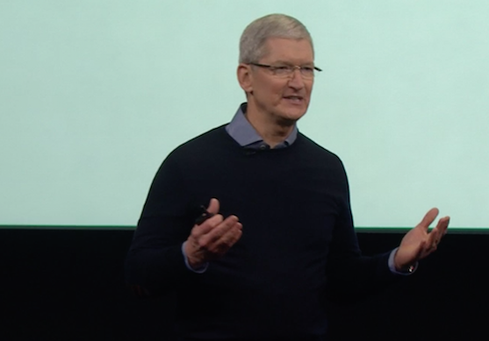 Cook then handed the reigns over to Apple's VP of environment, policy, and social initiatives, Lisa Jackson, who discussed the company's progress toward its green initiatives. Two years ago, Apple said it would power 100% of its operations via renewable energy. Jackson said the company is 100% renewable in 23 countries, including the US.

"We're very proud of fact that 100% of our data centers are powered by clean sources of energy like the sun, wind, and water," said Jackson. The company's global operations are 93% renewable.

Jackson also described a new robot it has created, called Liam, that will help break down old iPhones into their individual components so the parts can be reused or recycled.

Laudable efforts, to be sure.

Jeff Williams, Apple COO, took the stage next to discuss the company's progress with ResearchKit. Williams' demeanor was very low-key, something decidedly un-Apple. He described how ResearchKit has powered some of the largest health studies ever conducted. For example, ResearchKit has helped researchers find different asthma triggers in all 50 states.

Apple is following its ResearchKit successes with another tool called CareKit. CareKit should let app developers create better health management apps for consumers. Apple hopes CareKit will allow people to track their health over time and share relevant information with family members or medical professionals. The first target is Parkinson's.

Apple typically leads off its media events with a victory lap chock full of sales figures, app counts, store openings, and other achievements. Those were largely absent from Monday's presentation. The company did say that there are more than 1 billion active Apple devices, and 1 million apps just for iPads.

Once Apple wrapped up these discussions, it headed into the product announcements, which included the iPhone SE, iPad Pro (9.7-inch), new bands for the Apple Watch, and of course rollouts of iOS 9.3, watchOS 2.2, tvOS 9.2, and OS X 10.11.4.

Apple believes the iPhone SE -- which is smaller and less expensive than the iPhone 6s and 6s Plus -- will appeal to people who prefer compact phones that don't cost a lot. Some see Apple's move as a retreat of sorts, despite the successes of its larger iPhones. The 9.7-inch iPad Pro is a formidable alternative to the 12.9-inch beast, but it costs a pretty penny at $599.

The event wouldn't have been complete without an appearance from VP Phil Schiller, who managed to offend people with an off-the-cuff comment about PC usage.

During his introduction of the smaller iPad Pro, Schiller explained that some 600 million people are still using PCs that are five or more years old. "This is sad. It really is," noted Schiller. Schiller's comments were meant to highlight that the iPad could be an ideal replacement for out-of-date machines, but instead he struck a raw nerve. Many saw the comment as a put-down of poor people who can't afford to upgrade their equipment. Schiller got an earful for his remarks.

Cook then returned to the stage and, with obvious emotion, said goodbye to the Town Hall space in which the event was held. Apple said it expects its next event will be held at its new spaceship campus.

Apple often strikes a more jovial, jokey tone during its events. Execs Craig Federigi and Eddie Cue -- who often take the stage to show off new products, but did not present at Monday's event -- have more lively presentation styles. Those who presented at the March 21 event came across as more humble at times, but Apple was sure to brag about its accomplishments, too.

Eric is a freelance writer for InformationWeek specializing in mobile technologies. View Full Bio
We welcome your comments on this topic on our social media channels, or [contact us directly] with questions about the site.
Comment  |
Email This  |
Print  |
RSS
More Insights
Webcasts
Enterprise Database Strategies for 2020
Securing Active Directory the Way it Deserves
More Webcasts
White Papers
Wired vs. Wireless LAN Solution
NDaaS 101
More White Papers
Reports
Online Threats -- and What Your Org Can Do About Them
[Special Report] Remote Network Management
More Reports