Less than a week after Apple settled charges brought by the Federal Trade Commission that it failed to provide adequate disclosures for in-app transactions in iOS, the company's top legal executive urged the FTC to investigate Google for similar issues in Android.

According to documents obtained by Politico through a Freedom of Information Act request, Bruce Sewell, general counsel at Apple, sent a letter to FTC Chairwoman Edith Ramirez and Commissioner Julie Brill highlighting how the in-app purchasing system in the Android-based Google Play store had generated consumer complaints similar to those levelled at Apple.

The FTC declined to comment and was unable to provide a copy of the letter without a new FOIA request.

Neither Apple nor Google responded to requests for comment.

Both companies have endured regulatory scrutiny over the past few years. When Apple CEO Steve Jobs banned Flash from iOS in 2010, the Department of Justice and the Federal Trade Commission got involved, with the FTC ultimately pursuing an inquiry that was later joined by the European Commission. When Apple blocked Google Voice on iOS, the Federal Communications Commission got involved. Apple last year lost an -ebook price fixing claim brought by the DoJ.

Google continues to defend its search business and its handling of Android from regulatory skirmishes in the U.S. and Europe, several of which have been encouraged by a coalition that includes Microsoft and specialized search services. 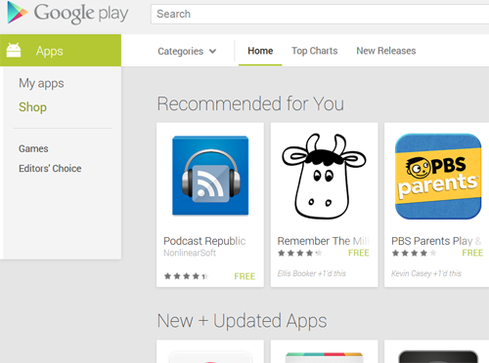 Some tech policy think tanks have stepped up their efforts to push back against what they see as excessive regulation. The Center for Data Innovation, for example, recently questioned the FTC's attempt to rein in data brokers, characterizing FTC involvement as a hinderance to commerce without any real improvement in consumer trust.

Apple's $32.5 million settlement with the FTC in January was the culmination of an inquiry prompted by complaints from parents about unauthorized in-app purchases going back to March 2011.

The problem with Apple's in-app purchasing system was that after an iOS user authenticated an in-app purchase with an Apple ID and password, anyone with access to the device could complete additional in-app transactions without authentication for 15 minutes. That issue has been addressed through software changes.

Like Apple, Google has been sued over lack of in-app purchase controls and in March it updated Google Play to include a way to limit in-app purchases.

Amazon faces FTC pressure about in-app purchases, too. Last week, it defended its approach in a letter to the agency, which is reportedly considering a complaint against the company.

Limiting in-app purchases, however, means limiting revenue, and that's something that few companies do willingly. According to a Distimo survey last December, 98% of Google Play revenues and 92% of Apple App Store revenues in November came from free apps selling in-app goods.

Thomas Claburn has been writing about business and technology since 1996, for publications such as New Architect, PC Computing, InformationWeek, Salon, Wired, and Ziff Davis Smart Business. Before that, he worked in film and television, having earned a not particularly useful ... View Full Bio
We welcome your comments on this topic on our social media channels, or [contact us directly] with questions about the site.
Comment  |
Email This  |
Print  |
RSS
More Insights
Webcasts
Bolstering Your Enterprise Cyber Risk Assessment
4 Practical Tips for Building a Data Lake
More Webcasts
White Papers
How DevOps Delivers on User Experience with Observability
Bandura Threat Intel Integrations Infographic
More White Papers
Reports
Are We Cyber-Resilient? The Key Question Every Organization Must Answer
Cloud Misconfiguration Mayhem
More Reports

Chumming the waters to attact regulators appears to be the third line of defense after product appeal and patent litigation fail.
Reply  |  Post Message  |  Messages List  |  Start a Board

I think both companies (and other OSes too) cannot fall back on their extensive ToS contracts, nor can they rely on their telecom partners' tome-long contracts either. All these developers should start from the same playing field in terms of making it more complex for users to buy from "free" apps. There are countless tales of parents whose phone bills were astronomical after they passed over their phones to placate whiny kids at a restaurant or movie theater
Reply  |  Post Message  |  Messages List  |  Start a Board

This struck me as petty at first, but to be fair isn't Apple merely asking that it's competitor be judged by the same standards?
Reply  |  Post Message  |  Messages List  |  Start a Board
InformationWeek Is Getting an Upgrade!