Documents To Go is a workhorse app on my Android tablet. I use it for note taking during meetings as well as reviewing text documents and spreadsheets. It can open and edit Microsoft Word, Excel and PowerPoint files without conversion and is faster and more flexible than the free Google Docs for Android app.

Need to get office work done on a tablet? If you use an iPad, you can buy Apple's Pages for word processing, Numbers for spreadsheet work, and Keynote for slideshows ($9.99 each). Microsoft Windows Phone users have a free mobile version of Microsoft Office. Android users? We've had the free Google Drive—but it's terrible. (See Google Docs App for Android Tablets: The Ugly Truth.) So, what's an Android tablet user like me to do? The app that solves my office editing problem is Documents To Go (Full Version) from DataViz.

Documents To Go is faster and more flexible than Google Docs for Android. Add a Bluetooth keyboard, and you truly have an office to go. Documents To Go's ability to open Microsoft Word, Excel, and PowerPoint files without conversion makes it a must-have app for those who work daily with those document types.

To get the full version of Documents To Go with editing capabilities, you first have to install the free version. The free version gives you the ability to view Microsoft Word, Excel, PowerPoint, and PDF files on an Android device, using its Word To Go, Sheet To Go, Slideshow To Go, and PDF To Go viewers, respectively. Once you have the free version installed, you need to buy Documents To Go Full Version Key, $14.99. The key unlocks the ability to edit your Word, Excel, and PowerPoint docs, although not PDF.

The app's start screen is a simple one. It lets you view recently opened files, starred (flagged as important) files, files stored on your Android device, and files in the Google Drive cloud. 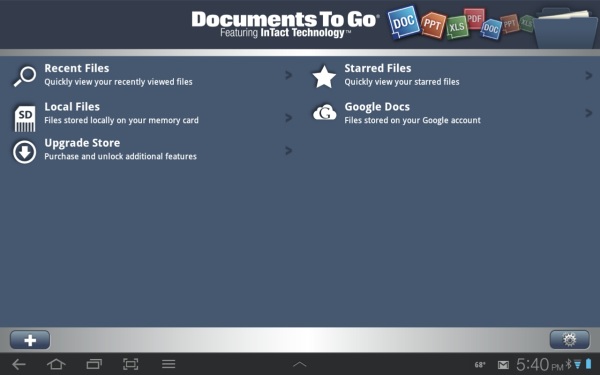 There's a bit of weirdness in which files the app can directly access because of the way Android handles storage. In the case of my Samsung Galaxy Tab 2 7.0 tablet, the mounted "sdcard" is actually the tablet's built-in flash storage. The app was unable to see files stored on my 32GB microSD memory card, which appeared as /mnt/extSdCard. I had to use a file explorer utility such as the free Astro File Manager. This utility lets you choose which app to use with a file and opens locally stored files nearly instantly. This is unlike Google's own Doc app, which takes eight seconds or more to open files it claims are stored offline. 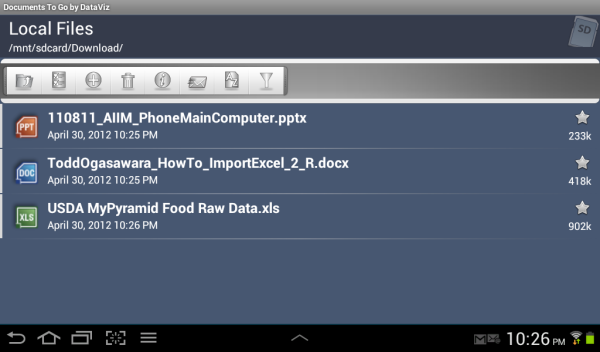 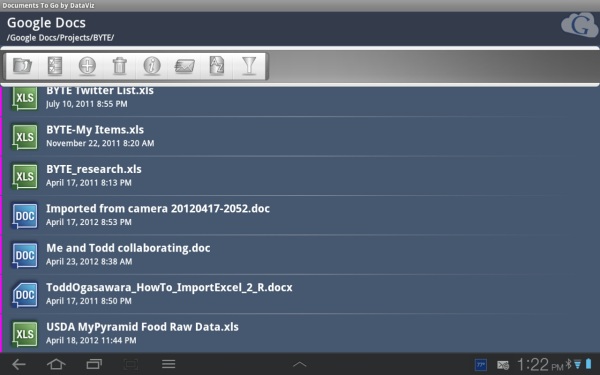 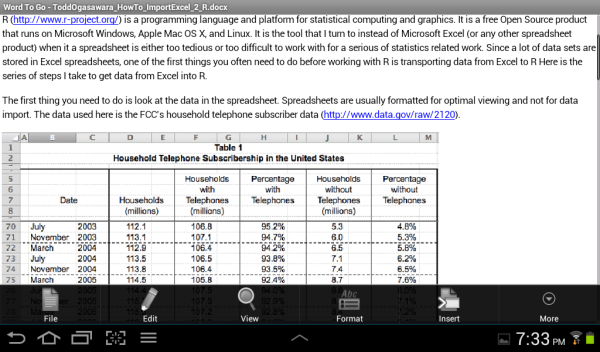 If you work regularly with spreadsheets, you'll be happy to know that Documents To Go lets you navigate in them as you would on a desktop. It's not limited to working with just the cells in a specified row, like the Google Docs for Android app is. 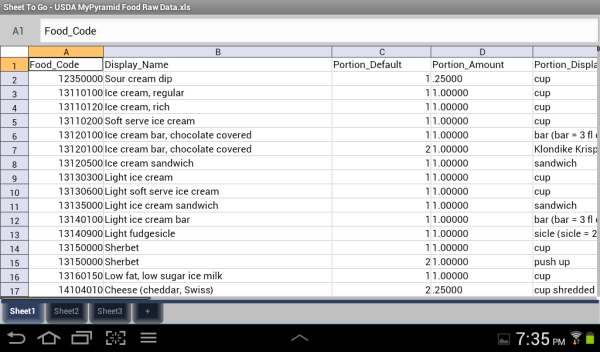 The apps spreadsheet story gets even better as you find it supports most of the formatting you expect in a desktop app as well as 111 functions. It provides a full list of supported functions. You can see the first few in the screenshot below. 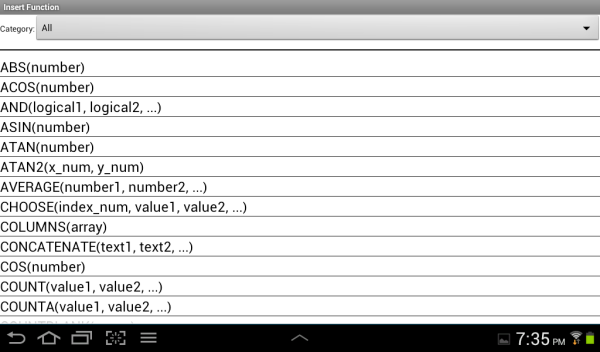 Documents To Go even lets you work with PowerPoint slide decks. Its ability to edit these decks is much more limited than its handling of text documents and spreadsheets. However, it's still better than Google Docs for Android, which doesn't work with Google's own cloud slideshow feature. 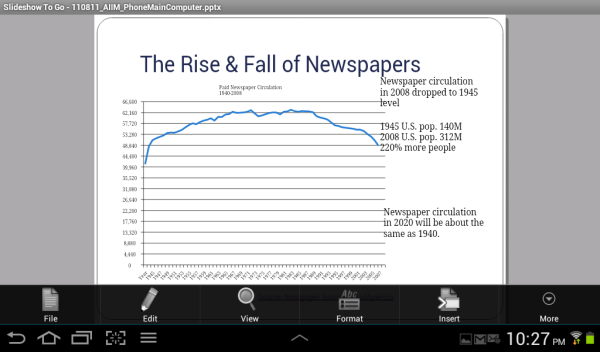 The limited but welcome slide-editing tools are Edit Slide text, Delete Slide, Slide Sorter. This should be enough to perform minor presentation tweaking. 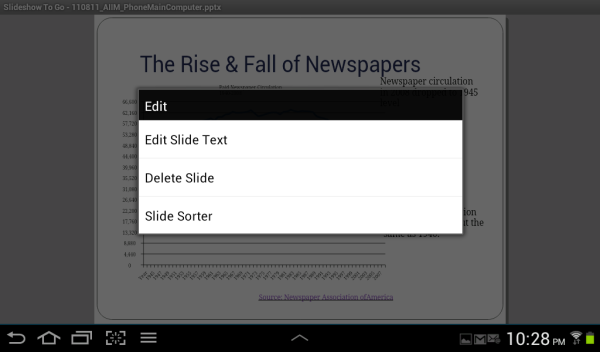 You are not limited to storing a draft or completed document to just local storage or Google Drive. Documents To Go lets you share documents in just about every way possible, including Bluetooth file transfer, cloud storage services such as Dropbox, email, and Evernote. 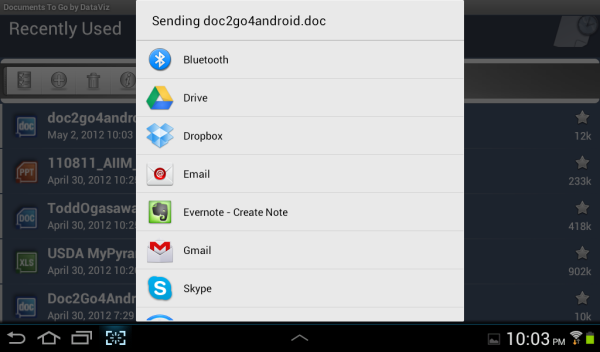 Combine Documents To Go with a Bluetooth keyboard (below) and you can get office work done anywhere. 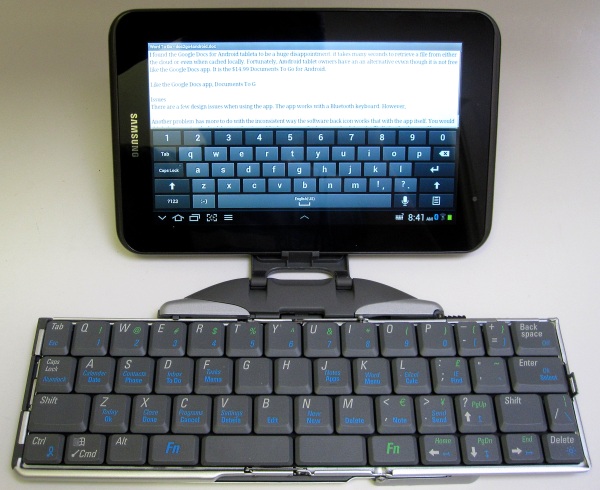 Name: Documents To Go
Price: $14.99 (Google Play or Amazon AppStore)
The full version of Documents To Go for Android lets you open and edit Microsoft Word, Excel, and PowerPoint files without conversion on your Android tablet or phone. It costs $14.99, but it's faster and more flexible than the free Google Docs for Android app.

We welcome your comments on this topic on our social media channels, or [contact us directly] with questions about the site.
Comment  |
Email This  |
Print  |
RSS
More Insights
Webcasts
The Failures of Static DLP and How to Protect Against Tomorrow's Email Breaches
How Elite Analyst Teams are Transforming Security with Cyber Reconnaissance
More Webcasts
White Papers
A Technical Deep Dive on Software Exploits
The Insecure State of Microsoft Teams Security
More White Papers
Reports
The State of Threat Detection and Response
2020 State of DevOps Report
More Reports
Copyright © 2021 UBM Electronics, A UBM company, All rights reserved. Privacy Policy | Terms of Service