Highlighting our Fall Summit -- an event focused on better integration and use of information -- Washington, D.C.'s outspoken CTO, winner of the Intelligent Enterprise Award 2005, shared the secret of the city's inspirational IT transformation. 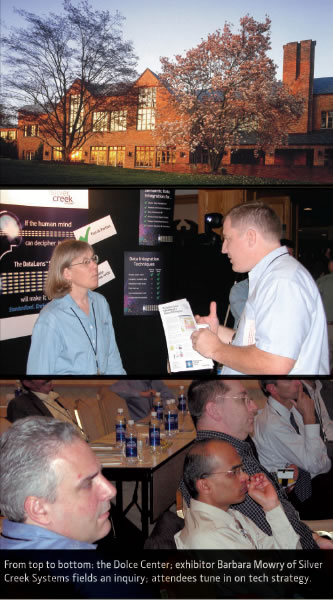 With a name like "The Dolce Norwalk Center for Leadership & Innovation," you might envision an ivory-tower think tank far removed the realities of running a business. Despite this secluded, campuslike setting, the first annual Intelligent Enterprise Summit held October 5 to 6 tied a forward-looking trend — the convergence of structured and unstructured information management — to proven technologies and practical advice for planning IT architecture and strategy.

The technology focus of this event was on information integration, business process management (BPM), text mining, Web analytics and business intelligence — all hot markets blurring the lines between data and content. But what really helped ground the Summit in top-of-mind issues for high-level IT and business executives was another first: the Intelligent Enterprise Award program. The anticipation and personal prestige of the awards helped draw nearly half of the 32 nominees to join those attending the Summit for its learning and networking opportunities. And this A-list of chief information officers, chief technology officers, chief operating officers and vice presidents raised the level of the entire event, asking among the toughest questions during presentations and kicking up the bandwidth of new business connections.

The Intelligent Enterprise Award was created to recognize IT executives for their ability use technology to deliver quantifiable enterprise results. The award showcases advanced use of enterprise applications, demonstrations of better business intelligence (BI) environments, and infrastructure and architectural initiatives that break down information silos, reduce costs and improve performance enterprisewide. The award also recognizes individuals who demonstrate outstanding leadership in selling a vision and motivating teams to complete major projects and long-term goals.

From Worst to First

All the Intelligent Enterprise Award nominees could point to impressive feats, but winner Suzanne Peck's story is one of achievement in the face of adversity. When Peck joined the 600-employee Office of the Chief Technology Officer, established in 1999, Washington, D.C., was ranked among the nation's worst municipalities in terms of technology. IT and telecommunications infrastructure was antiquated and fractured, and the district struggled with a morass of hundreds of legacy applications serving 66 agencies, 25,000 employees and 560,000 residents.

To serve the fundamental vision of "making government work," Peck's vision was to create a single, strategic enterprise architecture incorporating BI across a multitude of services. The roadmap for implementing this vision was delivered in a citywide IT strategic plan, first published in 2001 and recently revised to guide planning though 2008.

A key system within Peck's BI plans was an enterprise data warehouse called DC Stat. The warehouse collects data from dozens of city agencies and uses BI as common service across all District agencies to identify ways to increase revenue, cut costs and improve services. In one example, DC Stat tools identified $12 million in annual revenue that had gone uncollected due to a lack of coordination between information for the District's Chief Financial Officer and local housing inspectors. DC Stat was also used to identify "Hot Spots" were police resources were then targeted, reducing violent crimes by 25%, and "New Communities" where investments were made to reduce unemployment and increase home ownership.

Persistence on architectural standards has paid off as well. For example, starting in 2005, every major enterprise application must publish and subscribe to the central citywide data warehouse through a well-documented enterprise service bus, which has allowed decision makers throughout the District to view other agencies' data and applications for the first time. Meanwhile, the service approach to BI has enabled the Office of the CTO to buy software in bulk and is expected to save $20 million over the next five years.

Washington, D.C., has cleaned up with an impressive list of awards in recent years, including Public Technology Institute Solutions Awards for the DC Emergency Information Center and Telecommunications/IT, a Best Municipal Website Award from the Center for Digital Government and a Technical Innovation Award from the National Association of State Chief Information Officers.

Accepting the latest honor from Intelligent Enterprise, Peck said going "from worst to first" demands that she sidestep conventions and bureaucratic barriers to hire top-notch talent. "Seven years ago you simply couldn't attract the best and the brightest to come to work for the District," she said, "but nothing frees up a budget like success." Peck said she leveraged each new achievement to win new freedom and financial support to hire more talent and take on larger goals. Encouraging her peers to favor quality over quantity, she noted that "It's amazing what a small group of really bright people can do." Blasting "bean counter" thinking from the powers that be, she concluded her remarks with a give-'em-hell flourish, saying, "Even when they've got their feet on your neck, never let the bastards get you down."

The panel of seven Intelligent Enterprise Award judges (see listing, below) had no easy task selecting Peck as the winner from among four other award finalists. At ING Insurance Americas, finalist Raymond Karrenbauer is chief technology officer, leading the Technology Management Office (TMO) within an IT organization with approximately 3,000 employees. Under his guidance, the TMO produced an enterprise reference architecture that won a mandate as the technical standard throughout the ING Americas and ING Asia — Pacific regions. The award-winning architecture has led to $500,000 in annual savings through reductions in duplicate mailings, a 65% reduction in the company's data error rate and savings of approximately $450,000 for each project taking advantage of data normalization through an enterprise information integration infrastructure.

Finalist Mike Keppler, vice president, sales, marketing & revenue management systems at Marriott International, supports all internal users of technology at an organization with 133,000 employees and 2,600 properties in 65 countries. Keppler and his team also support all of Marriott's customers whose reservations are booked through the Marriott reservation system, MARSHA. In a BI-driven project initiated in 2003, Keppler directed the development of programs to gather and use information on preferences to improve service to the 22 million Marriott Rewards members and highest-value guests. Predictive modeling of customer behavior and corresponding marketing efforts are credited with increasing incremental revenue around targeted campaigns by 200%.