Lytro: The Next Big Thing In Photography - InformationWeek

Light field photography can eliminate the biggest problem photographers have: out-of-focus pictures. Don't toss your digital camera just yet, though. Although a major breakthrough, the Lytro is far from perfect. 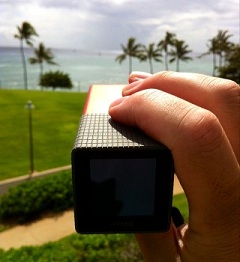 The Lytro camera might be the most revolutionary change in photography we've seen since digital came along. But don't toss your current camera in the trash just yet. It took a while for digital photography to overtake film photography. And Lytro's "light field photography" camera technology is a 1.0 product. Here's the good, the bad, and the worrisome things I found after taking it for a spin.

The Lytro looks nothing like any digital camera you've ever seen. It's a small, square barrel that weighs less than eight ounces. The controls are minimal. But in theory, the Lytro's light field technology capabilities eliminate the need for most camera settings. Simply snap a shot and no matter what the scene--people, landscapes, closeups--the Lytro produces photos that are never out of focus. That's because the Lytro collects all the digital information needed to fix a photo afterward--call it retroactive focusing if you will. Say someone's face, or a closeup of a flower or an insect, is blurry. Simply click on the area of the photo you want to be in focus and it sharpens right before your eyes. Try it on the photo of the keyboard I took, below. Change the focus as many times as you like.

So what's the catch? There are a few. A big one is that Lytro photos can be posted online only via the company's site. Right now the camera works only with Macs. Technically, the Lytro will frustrate photographers accustomed to having plenty of control over their pictures, including shape--the Lytro produces squarish photos.

The Lytro's simplicity makes it easy to learn. It has a lens on one end and a 1.52-inch touchscreen on the other. On the bottom is the power button, which is built into the camera's rubber grip, and a micro-USB port for transferring photos to your computer and recharging the camera's battery.

You can also turn the camera on simply by pressing the shutter button, which is located on the top. The camera defaults to a live view. Swiping left to right changes the view to playback mode. Swiping from the bottom upward displays a list of options that let you switch to the camera's Creative mode, display storage information, or display the current battery level.

The Lytro has an 8X optical zoom with a fixed f-stop of f/2. That's the extent of the setting controls, other than zoom and the Creative setting, which provides more extensive macro and zoom settings. There is no flash. Tapping the gear icon in the top right of the screen brings up a minimal set of software options: About, Delete All, and Reset.

Click here to go to our slideshow of the Lytro camera.

The optical zoom control is unusual. On top of the camera is a row of raised rubber bumps that serve as a slider. Running a finger tip left to right increases the zoom level; sliding right to left decreases it. The Lytro keeps the last zoom level active between uses, which some people might find convenient. However, it's easy to miss the the small visual indicator for zoom level in the viewfinder. After not using the camera for a while, it would be easy to pick it up again and accidentally take photos at an unwanted zoom level.

The Lytro is impressively zippy. There is virtually no lag time in recording a photo after you press the shutter button. It's ready to take the next photo after only a couple of seconds during which you get a quick preview of the image just taken. The reason it's so fast, according to the company, is because it doesn't have a traditional auto-focus motor.

The Lytro is Mac only
One of the the Lytro's biggest limitations right now is that it works only with Macs. Plugging a Lytro into a Mac the first time installs the OS X desktop software that comes on the camera. You can also download the software for OS X directly from Lytro's downloads site. According to the Lytro support FAQ, desktop software for Windows will be available sometime this year.

Transferring photos from the Lytro to my Mac took a while because there's so much data recorded for each image. Each light field photograph produces two files: one, which has an .lfp extension, is always a whopping 15MB. The second file associated with my images ranged from between 500K and 1MB in size. This second file ends with the extension stk.lfp. Compare these specs to those of, say, a JPEG photo produced by an ordinary point-and-shoot 12MP camera. Each JPEG would be between 1.5MB and 3MB in size. This makes Lytro light field images five to 10 times larger than conventional digital photos.

Once the file transfer is complete, you have to wait for the photos to be processed before you can view and play with them. I processed my photos on a late-2010 model 11-inch MacBook Air equipped with a 1.6-GHz Core 2 Duo processor and 4GB of RAM. Each photo took between 40 and 70 seconds of processing before I could view it. Fortunately, you can force a specific photo to the top of the processing queue by clicking on its grayed thumbnail image.

Once processed, light field photos can be viewed inside the Lytro desktop app. Tapping points on the photo brings that part of the image into focus. But disappointingly, you can't zoom into photos or view them full screen.