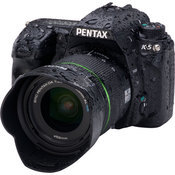 (click image for larger view)
Pentax K-5 DSLR Camera Front View
Pentax has introduced an upgrade of its prosumer camera that adds full high-definition video recording and a higher resolution sensor. The K-5, a midrange DSLR camera unveiled Monday, is a refresh of last year'sthe K-7. Both cameras are similar on the outside, equipped with the same water- and cold-resistant bodies.

However, on the inside the cameras have some significant differences. The K-5 comes with a 16.3 megapixel CMOS sensor, compared to the K-7's 14.6-megapixel sensor. In addition, the K-5 has a maximum burst rate of 7 frames per second, which beats the K-7's 5.2 fps. Pentax has added full HD recording of 1080p in the K-5, which is much higher than the K-7 720p. The K-5 can record full HD video at 25 fps, where the K-7 could record at 30 fps in the lower resolution mode.

Other differences include the K-5's use of Pentax's new Safox IX+ autofocus system, which contains improvements for taking pictures in low-light environments. Also helping to take pictures under those conditions is a high ISO of 12800 with better noise reduction. The K-7 has a high ISO of 3200.

The K-5 has three high dynamic range imaging modes. HDR in photography is refers to the ability to set a greater dynamic range of luminance between the lightest and darkest areas of an image than in standard digital imaging. The K-5 also creates 14-bit RAW images that can be captured in Adobe's DNG file format. Other features include a top shutter speed of 1/8000 of a second, more special effects filters than the K-7, a 3-inch LCD screen on the back and an HDMI port for moving HD images and video to other devices, such as an HDTV.

Canon's EOS 60D is designed primarily for the advanced amateur and includes a 3-inch diagonal LCD screen that swings out to the side and can be adjusted to a variety of angles for viewing when shooting. The 18-megapixel camera costs $1,099 for only the body, and $1,399 for the body/lens kit.