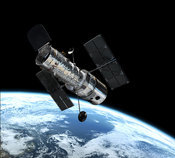 Hubble Telescope's New Images: Galaxies Through Time
(click image for larger view)
A new agreement between the Air Force, the Army and the Defense Information Systems Agency is expected to save the Defense Department more than $1 billion in future IT costs, Defense CIO Teri Takai announced in a joint statement released by the Defense Department.

The savings are expected to come through a shared IT architecture and modernization arrangement that is also expected to increase bandwidth and improve network security, DOD officials said.

As a result of changes in force structure, the Army was looking at excess information technology capacity, according to Richard Breakiron, network capacity domain manager for the Army's chief information office. At the same time, the Air Force was looking for ways to modernize its IT architecture to meet the requirements of the future joint information environment.

[ Pick up some leadership tips. Read 5 Habits Of Highly Effective Government IT Leaders. ]

"As [the Defense Department] continues to move aggressively towards [the Joint Information Environment], this partnership is an important step forward," said Teri Takai, DOD's chief information officer, in the DOD statement.

The upgraded MLPS routers will increase the Army's backbone bandwidth to 100 Gbps, said Mike Krieger, Army deputy CIO, in the DOD statement. At Army installations, network speeds will rise to 10 Gbps, he said. To put that in perspective, he said, Fort Hood, Texas, currently operates at 650 Mbps.

By moving to regional security stacks, the Army also expects to improve command and control capabilities and situational awareness through a single security architecture as part of a joint information environment, said Krieger.

The combination of MPLS routers and the regional security stack construct will improve performance and security, DISA Director Air Force Lt. Gen. Ronnie D. Hawkins Jr. said in the statement. "It creates a network that is fundamentally more defensible and more efficient," he said, noting that it also laid an important foundation for building the Joint Information Environment architecture.

The Army and DISA said they plan to implement the joint MPLS transport cloud and JRSS consolidation in fiscal years 2013 and 2014 to support operations in Southwest Asia and the continental United States.

Higher education is another area where this kind of infrastructure sharing would seem to make great sense.
Reply  |  Post Message  |  Messages List  |  Start a Board

Great to see smart partnerships in government
Reply  |  Post Message  |  Messages List  |  Start a Board
InformationWeek Is Getting an Upgrade!