Last week, Amazon brought the AWS Summit to New York, featuring experts from the company as well as partners and clients who shared their experiences with the cloud platform. Datadog, DoorDash, MongoDB, Intel, Moogsoft, and IBM were just some of the exhibitors and presenters at the conference.

The event saw its share of controversy with protesters -- who oppose Amazon furnishing technology to ICE (Immigration and Customs Enforcement) -- lined up along the entryway to the Jacob Javits Convention Center. This included interruptions by protesters during the opening keynote by Amazon CTO Werner Vogels.

After Vogels resumed the planned program, the conference brought clients such as the Financial Industry Regulatory Authority (FINRA) to the stage to share their AWS use cases. FINRA previously migrated to AWS and developed a platform it said adapts with the market while also offering resources for analysts to query vast sets of data.

Vogels discussed how Amazon helps AWS customers who build microservices-style environments and distributed applications. “There’s going to be complexity that evolves with that,” he said. Consistent communication management, Vogels said, is essential to ensure that all the different components work together. He also spoke about the importance of the tools such as AWS X-Ray that are used to observe and visualize components within such environments.

“In the distributed systems world, it is often hard to see where bottlenecks are and where failures are happening,” Vogels said.

With many organizations deploying components beyond AWS that still must function together, Amazon stepped up with a new offering to help with such integrations. Vogels announced the introduction of Amazon EventBridge, which is a service event bus for assessing processing data across AWS services and SaaS applications. The plethora of elements that need to be integrated means there is plenty of custom code, he said, which led to Amazon providing what it believes to be a simpler programming model. “You can stitch together both your code, AWS code, AWS services, and services from third-parties,” Vogels said.

He went on to discuss the importance of other aspects, such as operations, in addition to architecture and the building of software that must work together. “The question is, ‘What is the best operating model?’” Vogels asked. Organizations have many choices to consider including containers, servers, and serverless containers. He talked up the support and security of AWS that lets developers focus on building their applications.

Sporting an “Encrypt Everything” t-shirt, Vogels doubled down on the necessity for consistent vigilance to maintain the safe integrity of data and applications. “We need to continuously invest in security to make sure we stay ahead of all the bad actors,” he said. That includes the commitment of intellectual and financial capital by Amazon to deploy algorithmic reasoning and machine learning to prove it is protecting its customers from data breaches, he said. Security needs to adapt and evolve quickly to safeguard applications from malicious action, he added. That will require change that brings in multiple disciplines such as developers, architects and IT professionals to take responsibility for such protection. “Most of the patterns that we see are no longer brute-force, front-door attacks,” he said. “I think security needs to be everyone’s job, not just that of the security team."

Over the course of the summit, partners and clients of AWS shared insight on trends and their respective use cases that are highlighted in the slides that follow. 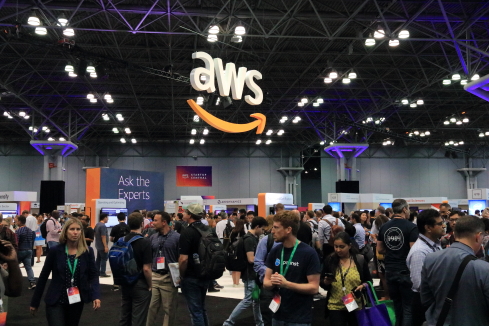 Image: Joao-Pierre S. Ruth
Joao-Pierre S. Ruth has spent his career immersed in business and technology journalism first covering local industries in New Jersey, later as the New York editor for Xconomy delving into the city's tech startup community, and then as a freelancer for such outlets as ... View Full Bio
We welcome your comments on this topic on our social media channels, or [contact us directly] with questions about the site.

Does Identity Hinder Hybrid-Cloud and Multi-Cloud Adoption? Joao-Pierre S. Ruth, Senior Writer,  4/1/2021
White Papers
2020 SANS Enterprise Cloud Incident Response Survey
The Top 5 Mistakes Everyone is Making in Vulnerability Remediation
Smart Service Management: Working Better Together with a Connected Enterprise
The Five Major Security Pitfalls of WFH and How to Solve Them
What is Pure Signal RECON?