Mark Karpeles, CEO of Mt. Gox, resigned from the Bitcoin board of directors on February 24 after halting withdrawals. Then, news dropped of breaches and the site being shut down, possibly headed for an acquisition. These are just the latest twists in the cryptocurrency’s fortunes. We’ve seen meteoric rises -- including a 400% increase in value in about 15 days last October -- along with drops tied to reports of security flaws. There's even a scandal involving a Harvard researcher.

It’s easy to write off Bitcoin and other emerging cryptocurrencies as too risky or unproven for mainstream use. But the real risk is in the status quo.

To recap, a crytocurrency is managed by a decentralized network of individual, peer-hosted currency wallets, unbacked by any governmental entity. That peer network, in theory, keeps each transaction honest. The convenience, however, is anything but theoretical. In a global economy, Bitcoin makes international transactions easy and nearly instantantaneous. You can carry on your phone, encrypted, a Bitcoin wallet that’s as good as cash anywhere in the world yet not prone to theft like paper money. With just an Internet connection, you can transfer money to anyone, anywhere, without giving a third party rights to your transaction history -- something that’s becoming more important as reports emerge of rampant corruption in federal surveillance programs. Exchanges can swap Bitcoins for a currency of a buyer’s or seller’s choice in a matter of moments and perform deposits and withdrawals via bank transfers or cash payouts at an ever-increasing number of locations.

Bitcoin is a trading currency, not a reserve currency. A reserve currency functions by providing enough volume to spread tens of billions of units among organizations and nations in a complicated international web of interdependent fiscal promises. Think bonds, stocks, and business and national agreements: They all use large sums of extant reserve currency to secure relations and stabilize trade. 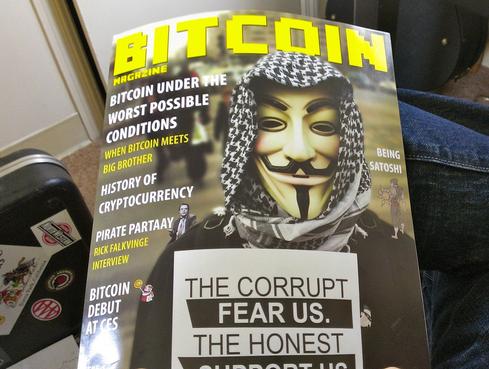 Bitcoin isn't about a reserve or financial hedging. It’s about two people exchanging goods or services. Before we invented the global economy, we traded in gold, silver, even cattle. We backed paper notes with real commodities because we hadn’t yet invented the tangled web we call “international finance” that requires huge sums to sustain. Commodity-backed notes were a trade currency, and that’s the difference between Bitcoin and the dollar, euro, pound, or yen.

Bitcoin, and cryptocurrencies in general, signal the return of a genuine trade currency that's accepted worldwide.

But perhaps the most valuable and compelling aspect of a cybercurrency transaction is this: It almost completely eliminates payment processing fees for buyers and sellers of goods and services. Right now, the credit card is consumers' medium of choice. Consider international purchases. We buy goods in a foreign currency, say pounds, and our credit card company pays the person far away and converts our dollars to pounds at an exchange rate just a tad below market prime.

It’s so low a margin, and cards are so convenient (for now, anyway) that we don’t get irked when processors make a few cents off our transactions. But the cents from those billions of transactions add up -- we’re talking a fortune in exchange rate manipulation alone.

But what should really get us riled up are the fees for accepting plastic in the first place. Small vendors pay $1 plus 3.5% of the total purchase for every credit card transaction. The restaurant you visited last night and paid by plastic? That small-business owner had to charge more for your sandwich to pay the MasterCard piper. For big retailers, this fee is smaller, around 2% of the transaction total. Still, like exchange fees, they add up.

[If you realize that mobile security means more than ensuring users don't download malware-bearing games from the Android store, take our 2014 survey and enter to win a 32 GB Kindle Fire HDX.]

Here’s the billion-dollar question: Why haven’t these fees dropped as a result of nimble card provider startups entering the fray, or in response to completely new ways to pay for that sandwich? In a free-market economy, competition should ensure that fees are competitive. Your local deli owner ought to be able to figure a way around that $1 plus 3.5%, besides insisting on cash only.

On the surface, there is competition among Visa, MasterCard, American Express, and Discover. Yet fees haven't budged in years. Why?

The short answer is, the system is structured to make it incredibly difficult for new card entities to get in the mix. Discover and Amex are grudgingly allowed -- sometimes. We've all seen ads for venues where only Visa is accepted. New, independent card offerers can't get into the game, even if they could afford the prohibitive capital outlay. That's the stick.

The carrot is that Visa and MasterCard are franchisers. Like a Dunkin Donuts, you can buy into their system and offer Visa- or MasterCard-branded services. You make your money on interest rates, penalty fees, and other stipulations of the cardholder agreement. But Visa and MasterCard, or a few trusted business partners, control the processing of transactions. And it’s those organizations that impose the 3.5% vigorish on small businesses.

American Express and Discover Card are independent. They issue their own cards and are responsible for their own transaction processing, so they could exert downward pressure, right?

In theory, but not in practice. With only four players in the market, it’s not difficult to imagine an unstated “gentleman’s agreement” to hold steady on rates, regardless of other competitive efforts. It’s all very neat and contractual, but the bottom line is that by keeping credit card processing fees static, everyone makes their money, and no single organization is vulnerable to antitrust. It’s a great deal for credit card processors, but it’s bad for businesses and by extension customers. It’s why so many shops and restaurants impose a minimum purchase on cards (to cover the $1 fee) and/or offer discounts for cash purchases. And don’t even get me started on the costs for PCI compliance.

And that’s the real promise of Bitcoin and other emerging cryptocurrencies. They cut the middleman credit card processors out of the picture. Bitcoin opens the market again to competition and innovation. And suddenly, its value is crystal clear.

Jasmine McTigue is principal and lead analyst of McTigue Analytics and an InformationWeek and Network Computing contributor, specializing in emergent technology, automation/orchestration, virtualization of the entire stack, and the conglomerate we call cloud. She also has ... View Full Bio
We welcome your comments on this topic on our social media channels, or [contact us directly] with questions about the site.
Comment  |
Email This  |
Print  |
RSS
More Insights
Webcasts
Data Security, Governance, and Privacy in an Age of Analytics
The Tech Execs Ransomware Incident Response Playbook 1/20
More Webcasts
White Papers
Unlocking Cloud Benefits with the Right Migration Strategy
AWS S3 Usage & Cybersecurity Landscape
More White Papers
Reports
The State of the Cloud 2021
State of DevOps 2021
More Reports
Copyright © 2022 UBM Electronics, A UBM company, All rights reserved. Privacy Policy | Terms of Service