SEARCH
A minimum of 3 characters are required to be typed in the search bar in order to perform a search.
Announcements
Alert
Got some free time? Grow your knowledge from the comfort of your computer for FREE!
Alert
Are you looking to stay on top of IT trends? Check out our FREE webinars and virtual events!
Alert
Planning for 2023? Be sure to check out our upcoming in-person events!
Report
How does your salary stack up? 2022 IT Salary Survey Results Revealed
PreviousNext
Big Data Analytics
6 MIN READ
News

There's nothing new about energy companies using computers and data analysis to find and produce more oil and gas. But ConocoPhillips is taking this approach to the next level with PLOT, a custom-built Plunger Lift Optimization Tool that has increased production from more than 4,500 natural gas wells by as much as 30%.

That's just a start. ConocoPhillips is now taking PLOT, launched a few years ago, out of the first of three phases, applying it to thousands of additional plunger-lift-style gas wells in the U.S. and Canada. In addition, it's applying the techniques and lessons learned to other types of gas wells as well as to oil production.

The key to PLOT's success has been getting more wells connected to ConocoPhillips' infrastructure, gathering more data from those wells more frequently, and applying analyses to optimize gas production. Plunger-lift technology has been around for decades, so wells dating to the 1950s offer only basic gas pressure and flow-rate data. As part of the PLOT initiative, ConocoPhillips is installing more sensors to capture several more pressure and temperature readings, and it's sampling those readings every 30 to 60 seconds, as opposed to once per hour or day. By calculating pressure and temperature differentials at different parts of a well, ConocoPhillips can spot wells that are producing efficiently and those that aren't.

"It's like you're trying to tell a story, but you're only looking at snapshots at certain points in time," explains Pat Bergman, a principal engineer in ConocoPhillips' San Juan business unit. "With PLOT, you're looking at a movie, and you can see so much more when you have this higher-frequency data." (The San Juan Basin, the starting point for PLOT, centered in New Mexico and Colorado, has most of the company's plunger-lift wells.)

Well data used to be compiled in spreadsheets, and follow-up actions were manual and labor-intensive. The PLOT initiative introduced 43 performance dashboards for individual wells and gas fields. Simple threshold alerts let well operators know when plunger-lift operating cycles must be adjusted to eliminate fluid buildups that restrict the flow of gas.

The move to improve connectivity, add more sensors, and collect and analyze more data is happening across ConocoPhillips and throughout the oil and gas industry, says CIO Mike Pfister. 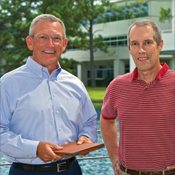 To get more of its far-flung wells continuously connected, the company is building its own 130-foot and 80-foot radio and Wi-Fi towers to cover remote energy fields in South Texas, where commercial carriers don't offer mobile coverage. This private communications network will keep wells in sync with company data centers in Houston and Bartlesville, Okla., where the information is cleaned up, analyzed and stored.

"It's an example of building an Internet of things, where we're doing so much more sensoring, and that's creating orders of magnitude more data," Pfister says. "We're loading really large data sets and cutting the algorithms loose to try to understand how we can improve our results."

To cope with that growing scale of data, ConocoPhillips has pilot projects underway in the areas of high-scale data warehousing (with Teradata), in-memory data analysis (SAP Hana) and high-scale, multistructured data processing (Hadoop). For the time being, PLOT is running on conventional databases, in part because the old plunger-lift wells don't generate as much data as newer wells.

"Like many other companies, we're in the process of figuring out how different this is going to be than the traditional business intelligence and decision-support systems we've used for years," Pfister says.

Not A Support Function

ConocoPhillips' 1,250-employee IT department isn't viewed as a support organization or a cost of doing business. It's viewed as a "discretionary investment that we make just like equipment for drilling wells," Pfister says. That is, it's run not as a service department, but as a part of the business that's every bit as important as those that oversee other technologies at the core of oil and gas exploration.

Along with the heads of ConocoPhillips' other technology sectors -- drilling operations, geology, as well as the company's major capital projects -- Pfister reports to Al Hirshberg, executive VP, technology and projects, who in turn reports to chairman and CEO Ryan Lance.

With the PLOT project and other data-intensive initiatives, ConocoPhillips' IT department is investing in people. Recent hires include experts in data quality and data acquisition. Data quality has been a major challenge with PLOT, given the company's different generations of remote terminal units (the computers stationed at wells) and different communications methods (over cellular, radio and Wi-Fi). Different data-polling cycles and missed polls have contributed to data complexity and variability.

Change management is another challenge on the PLOT project. Many well operators took to the new dashboards quickly and are adjusting plunger-lift cycles and tweaking well operations every day to increase output. Others are trained but either still don't understand what to change or just aren't following through on recommended actions, Bergman says.

It's one reason the San Juan Business Unit is moving to a centralized approach, whereby a dozen people in an operations center monitor all the wells and direct optimization efforts rather than count on the hundreds of well operators -- the people who travel from well to well to make adjustments and maintain equipment -- to interpret the dashboards and determine which actions to take. "The operations center staff will be able to see which wells are operating within expected parameters and which ones are not, and they'll be able to direct the operators on which wells to visit and what to do," Bergman explains.

A next step in the PLOT program is to introduce automated well optimization based on alarm thresholds. ConocoPhillips originally planned to roll out that functionality in the third phase of the project. But Bergman says the company has learned that certain thresholds are clearly associated with specific well conditions, so it can take action remotely. "We had to be very confident in what a series of alarms means because the last thing you want to do is somehow reduce well productivity," he says.

The PLOT program isn't a typical industry investment considering that gas prices are relatively low and plunger-lift wells in the San Juan Basin tend to be old and generate small profit margins. Oil and gas companies are more typically investing in areas supported by newer technologies, such as horizontal drilling and hydraulic fracturing. ConocoPhillips is indeed making those investments, too.

"The encouraging thing about PLOT is that we didn't have to spend a lot of money," says Pfister, though the company won't disclose the investment amount, "and yet it improved the efficiency of those wells and got that business unit back to being competitive with other choices we have for investment."

ConocoPhillips has plenty of work ahead to expand its PLOT dashboards and automation capabilities and to take the approach to its gas fields in Canada and the North Slope of Alaska. That approach has also helped advance the company's data analysis and optimization practices with other types of wells, Pfister says.

Improved efficiency is a reward in itself, and in the case of PLOT, benefits accrue at multiple levels: improving the company's revenue and the value of its wells, reducing greenhouse gas emissions tied to inefficient wells, and eliminating unnecessary trips to each well by using remote monitoring. The project is also reducing U.S. dependence on imported oil by making the most of domestic energy sources.