SEARCH
A minimum of 3 characters are required to be typed in the search bar in order to perform a search.
Announcements
Event
Enterprise Connect 9/27-9/29 - Time is running out, secure your FREE Virtual Pass today!
PreviousNext
Big Data
Slideshow 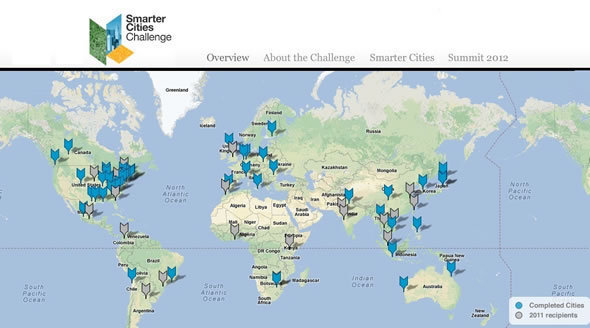 Launched in 2010, the Smarter Cities Challenge has already seen grants awarded to two waves of winning cities from among more than 400 applicant cities seeking innovative, technology-driven solutions to major challenges such as economic and workforce development, transportation and infrastructure planning, downtown revitalization and urban planning. The latest round of 31 winning cities was announced at the November 15 Smarter Cities Summit in Palisades, N.Y., where mayors, city CIOs and other policymakers and technology innovators gathered to review successes and share strategies.

The grant program assigns six IBM experts to study the problems identified by each city. The grant work culminates in a three-week, pro bono consulting engagement through which these experts meet with local stakeholders and deliver recommendations on how cities can work smarter, taking advantage of technology to make the best use of scarce resources. Among the cities that have been through this process, Boston is developing an open data platform aimed at better sharing information, and it's working toward developing a cross-agency master traffic control system. Chicago is looking to develop a Silicon Valley of its own, but to do that it needs to develop a tech-savvy workforce. IBM is working with the city on math and science education initiatives across primary and secondary schools.

In Louisville, Kentucky, breathing disorders such as asthma are seen at higher-than-average rates, so the city is dispensing GPS- and Bluetooth-enabled rescue inhalers that gather data on asthma attack outbreaks so the city can find causes and work on cures. Philadelphia is divided between digital haves and have-nots, with more than 40% of households lacking a computer and access to the Internet. The city is working with cable provider Comcast to provide low-cost packages bundling laptops and Internet access, and IBM has advised the city on coordinating data, content and programs aimed at addressing a gap in education and training.

IBM's consulting engagements in each city are valued at $400,000, but it's a smart philanthropic investment that could lead to commercial rewards. IBM's recommendations often point toward data-integration projects, analytics deployments and case-management systems projects that might cost upwards of tens of millions of dollars. Even where such projects are subject to competitive bidding requirements, the Challenge Grant work gives IBM deep insight into city systems and IT challenges, and, more importantly, goodwill and close working relationships with city leaders and technology stakeholders.