Rick Perry and Breaking Down Hope vs. Hype at The AI Summit - InformationWeek

Learn some of the aspirations government has for AI and ways to see through the froth.

There is an “epic race” underway, according to Rick Perry, to unlock the power of artificial intelligence, and government and the private sector alike are trying to benefit.

The former Secretary of Energy spoke at The AI Summit in New York this week about his belief that the United States should pursue the leadership position in AI. He was one of many presenters at the Informa-sponsored conference, which included insights on getting past the hype surrounding AI.

During his speech, Perry said he saw opportunities for AI to enhance medical diagnoses and other applications that could affect people’s lives. “In the next few years we’re going to be able to see answers to questions that we’ve never been able to get to before,” he said. “We as a country are committed to expending the dollars, focusing on these artificial intelligence areas.” 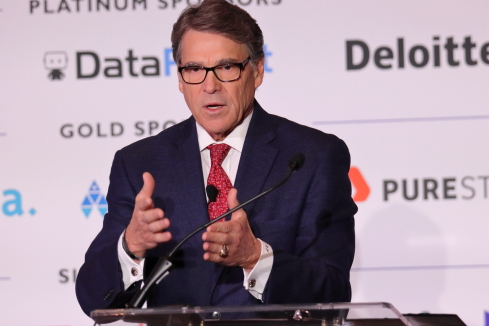 Rick Perry, former Secretary of Energy, at The AI Summit

Perry also said other nations are making deep investments in the pursuit of AI supremacy. “I promise you the Chinese and the Russians are spending massive amount of money,” he said. “The focus they have on this, there is no doubt who the competition is here.”

He warned about potentially nefarious uses of AI, such as foreign governments applying it to invade the privacy of citizens. Perry also said there are ways for AI to benefit humanity, such as running models to enhance the development of fusion energy. “These are places that we as a country need to be focused on so we can deliver this innovation around the world,” he said.

Some of the lofty expectations heaped on AI, though, can amount to smoke and mirrors. Jeff McMillan, chief analytics and data officer for Morgan Stanley Wealth Management, gave a speech that drilled down on ways for organizations to test the AI solutions being pitched to them.

The way certain vendors in Silicon Valley and elsewhere, he said, abruptly pivoted into AI providers is a cause for closer scrutiny. “Every company somehow transformed from a data management company or a workflow processing company to an AI company in one year,” McMillan said.

A healthy dose of disbelief can be crucial to identifying useful AI technology from unrealistic promises. “There’s no silver bullets,” McMillan said. “There’s no bots, no machine, or consultant that is going to independently solve this problem for you.”

Getting real value from AI requires a robust staff, leadership, compliance, and support across the organization, he said. AI also needs accurate, predictive data to work with, McMillan said, otherwise “it’s like buying a Ferrari and not having any gas.”

He offered this breakdown of AI considerations organizations should take to heart:

Joao-Pierre S. Ruth has spent his career immersed in business and technology journalism first covering local industries in New Jersey, later as the New York editor for Xconomy delving into the city's tech startup community, and then as a freelancer for such outlets as ... View Full Bio
We welcome your comments on this topic on our social media channels, or [contact us directly] with questions about the site.
Comment  |
Email This  |
Print  |
RSS
More Insights
Webcasts
Cybersecurity Risk Management
Managing a Hybrid Cloud Infrastructure
More Webcasts
White Papers
2020 SANS Enterprise Cloud Incident Response Survey
The Top 5 Mistakes Everyone is Making in Vulnerability Remediation
More White Papers
Reports
Building the SOC of the Future
The State of DevSecOps Report
More Reports