SEARCH
A minimum of 3 characters are required to be typed in the search bar in order to perform a search.
Announcements
Event
Enterprise Connect 9/27-9/29 - Time is running out, secure your FREE Virtual Pass today!
PreviousNext
Big Data
News

Amazon Web Services is filling the gaps in its software development/deployment process in a bid to attract enterprise developers.
Charles Babcock
Editor at Large, Cloud
December 06, 2016

Amazon Web Services, when it started out 10 years ago, seemed to be talking another language: Follow our restrictive conventions for using remote infrastructure and be among those to get the advantages of cloud computing.

Now Amazon is talking a new language, the language of enabling whatever infrastructure IT wants. AWS is starting to offer IT developers an unbroken chain of application development services, including sophisticated container deployments in the final stage of development. Heretofore, it's had spot tools for code headed to the cloud. Now it's trying to fill in the gaps with such tools as CodeBuild and OpsWorks for Chef Automate – tools that allow a team to write and deploy code in a seamless fashion in the cloud.

And, as it finds developers adopting these tools, it is following up with a growing catalogue of application services that are likely to find their way into next generation of cloud-based systems, such things as a voice-activated interface for end users issuing commands or a tool for conversion of text to speech as a way for the enterprise to interact with customers.

For example, Amazon Polly can translate text submitted as a stream to it into a rough equivalent of conversational English. It uses context processing to ascertain the intent of the writer and avoid awkward, incorrect and machine-witless word usage that makes the text sound unintelligible, as previous translation systems often did.

Amazon Rekognition can inspect images and catalogue their contents. It can assess the apparent mood or "sentiments" of the people pictured in them. Such a system could help retail establishments recognize customers as they come through the door, or as one banking IT manager suggested, a con man using a false ID to impersonate a customer.

Amazon Lex is the core speech recognition system from Amazon's highly successful Echo tower and Echo Button home appliances. The Alexa voice recognition responds to queries from the human voice with the ability to place an order on Amazon.com, order an Uber ride, or go to the right Web destination and extract information.

These services might be added to a next generation application being developed by an IT project team already using the EC2 cloud. In the past, such a team would have set up a build server to manage changes in  the team's code base and compile and merge additions and changes. That would have been the customer invoking a server in basic AWS infrastructure and managing it themselves. Now AWS is offering CodeBuild as "a fully managed service." 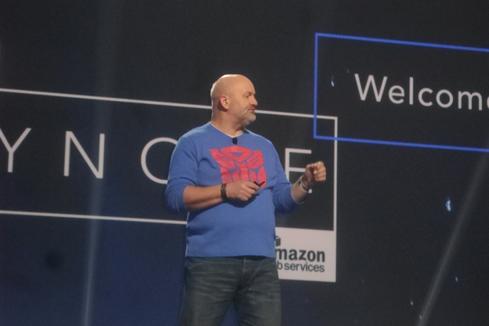 Instead of just providing infrastructure, AWS allows a development team to send its raw source code to the service where it is subjected to unit tests and merged into the previously existing code. The team pays a fee per hour of service use, but when the build is done, the service is shut off until the next time it's needed.

Likewise, AWS added OpsWorks for Chef Automate. An IT operations team has to take a new application and configure it to work with its dependencies in the optimized fashion in which it wants it to run. Operations would normally maintain a 24-hour a day Chef server, "and work to keep it updated with the right version of Chef and keep it running," said AWS CTO Werner Vogels in a Dec. 1 keynote. Instead, he offered OpsWorks for Chef Automate as another "fully managed service."

Indeed, the slogan of Amazon.com, the parent company, has been "the world's most customer-concentric company." Now AWS has adopted it as well, with the slight medication: "the world most IT customer-concentric company." Once enterprise development teams get used to using these fully managed services, it's hard to see how they are going to go back to managing servers on their own. It's part of AWS' strategy to reduce the 80% of time that experts gauge development teams put into establishing what they need to work with and instead to shift more of that effort into developing new code.

In an age in which "software is eating the world," in venture capitalist Marc Andreesen's phrase, producing more software is part of what keeps your company on top. Amazon is providing as convenient an environment for doing so as it can. For example, it's added Microsoft C# to the languages that can be used for developing functions that will be invoked by the Amazon Lambda event management service.

Developers who've adopted use of Docker containers likewise were given the option of using the existing Amazon EC2 Container Service, which allows an IT manager to start or stop a container-based application on EC2. It automatically provides the cluster for it, manages the cluster with Elastic Load Balancing and responds to questions on the state of the cluster's health. It can also give it the Elastic Block Store volumes that it needs and assign it Identity Access Management service based on user roles.

It's an example of the "deep integration" that Amazon is trying to provide between developer needs and EC2 services, Vogels said during his Dec. 1 keynote.

More sophisticated services are being added to the developer services. Amazon Pinpoint enables targeted marketing campaigns aimed at mobile users based on the understanding of their behavior that Pinpoint has been able to gain. Existing users of Amazon Mobile Hub and the Mobile software development kit can extract user behavior data from those services for use in a Pinpoint marketing campaign. Pinpoint became generally available Dec. 1.

Vogels pointed to such customers as Netflix, Trainline.com, Mapbox, the Financial Industry Regulatory Authority and Capital One as indicators of how companies build their future with data and development in the cloud.