17 comments
Comment Now
Big data means many things to many people, but how broad is its impact? Consider these figures on big data and the gurus who splice it. 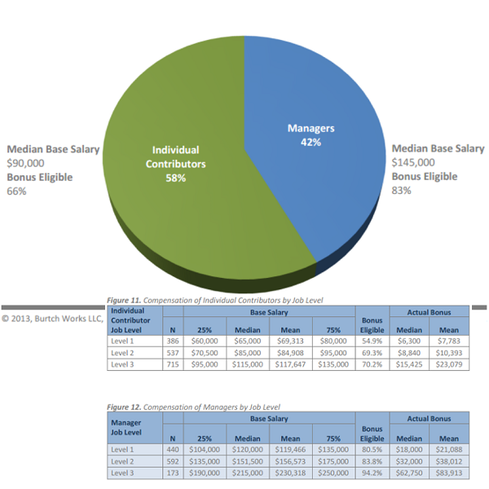 Big data = big bucks
Big data jobs pay quite well. According to Salaries of Data Scientists, an April 2014 study from Burtch Works, the 2014 mean base salary for a staff data scientist is $120,000, and $160,000 for a manager. The estimates are based on interviews with more than 170 data scientists from a Burtch Works employment database. The pay scale is almost as good for the broader category of big data professionals, meaning those who "apply sophisticated quantitative skills to data-describing transactions, interactions, or other behaviors of people to derive insights and prescribe actions." In this category the 2013 median base salary for staff is $90,000; for managers, it's a cool $145,000.

I agreed your all points its true video is the biggest data  that way we can show every functional area  .

I agree. IW posted a good article about how John Deere is using IoT to benefit themselves and their customers. There was another one about CSX improving operations with IoT tech. As you pointed out, they had a solid plan for collection and analysis.
Reply  |  Post Message  |  Messages List  |  Start a Board

Great article, Jeff!  Big data can be intimidating, so thank you for putting these facts into one comprehensive guide.  It makes everything easily accessible. I also liked the pictures, charts and graphs you used throughout - very helpful. At www.ProseMedia.com, we always make sure to be as well-informed as possible, so articles like yours are quite useful. Thanks!
Reply  |  Post Message  |  Messages List  |  Start a Board

Great slide show with lots to think about from the technology/data perspective. From the business perspective, Forrester's recent advice has been to build the business case first, before deploying the technology. Make the business case (or cases) and the right tech choices will follow. Don't do it the other way around: build a platform, collect data and hope something will come of it.
Reply  |  Post Message  |  Messages List  |  Start a Board

Actually the majority of that recorded video is from security cameras that run 24/7. This is the video data that our software integrates with other data sources to be used in a variety of ways, mainly fraud detection and prevention.
Reply  |  Post Message  |  Messages List  |  Start a Board

@David, it might be too big and random when it's stored, but entities/enterprises that are organized about and have pre-determined how they are going to use data before solliciting it are going to be more successful. If a company brings in data without pre-set plan, then, yes, it probably will get tangled.
Reply  |  Post Message  |  Messages List  |  Start a Board

Big data a bubble? Only if you define bubble as a phenom where some people will lose a lot of money and some will make a lot of money. Some will spend well, with focus and clear goals on big data efforts, and some will chase the dream without discipline and not get a return. Big data initiatives won't lift all boats, but the value to the winners will be undeniable.
Reply  |  Post Message  |  Messages List  |  Start a Board

Thanks for the great article. It's good to have a comprehensive understanding of big data and it's future prospects. I'm currently doing research on companies offering services based on Hadoop framework for market analysis. I came across these companies

Can anybody suggest me names of companies offering services based on Hadoop framework? Appreciate your help in advance.

Good article. Why do I get a sense is that a lot of the big data story is just another bubble? I can totally see enterpises to invest so much into it and underestanding a little pieaces of it but at the end ROI won't be there so after a few years they quite and the whole thing will be forgotten.
Reply  |  Post Message  |  Messages List  |  Start a Board
Page 1 / 2   >   >>
Editors' Choice
Hot Topics