Most companies remain on the big data sidelines too long, then fail. An iterative, start-small approach can help you avoid common pitfalls.

It doesn't have to be this way.

The key to big data success is to take an iterative approach that relies on existing employees to start small and learn by failing early and often.

Herd mentality
Big data is a big deal. According to Gartner, 64% of organizations surveyed in 2013 had already purchased or were planning to invest in big data systems, compared with 58% of those surveyed in 2012. More and more companies are diving into their data, trying to put it to use to minimize customer churn, analyze financial risk, and improve the customer experience.

That's bad, but the reason for the failure to launch is worse: Most companies simply don't know what they're doing when it comes to big data. 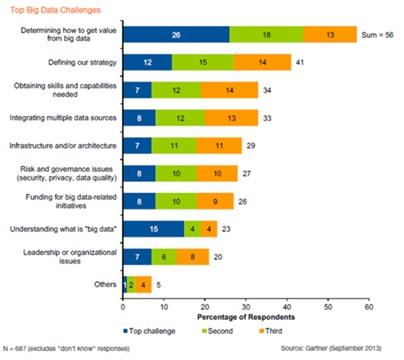 It's no wonder that so many companies are spending a small fortune to recruit and hire data scientists, with salaries currently averaging $123,000.

8 ways to fail
Because so many organizations are flying blind with their data, they stumble in predictable ways (including thinking that a data scientist will magically solve all their problems, but more on that below). Gartner's Svetlana Sicular has catalogued eight common causes of big data project failures, including:

Innovate by iterating
Because so many organizations seem hamstrung in their attempts to start a big data project, coupled with the likelihood that most big data projects will fail, it's imperative to take an iterative approach to big data. Rather than starting with a hefty payment to a consultant or vendor, organizations should look for ways to set their own employees free to experiment with data.

A "start small, fail fast" approach is made possible, in part, by the fact that nearly all significant big data technology is open source. What's more, many platforms are immediately and affordably accessible as cloud services, further lowering the bar to trial-and-error.

Big data is all about asking the right questions, which is why it's so important to rely on existing employees. But even with superior domain knowledge, organizations still will fail to collect the right data and they'll fail to ask pertinent questions at the start. Such failures should be expected and accepted.

The key is to use flexible, open-data infrastructure that allows an organization's employees to continually tweak their approach until their efforts bear real fruit. In this way, organizations can eliminate the fear and iterate toward effective use of big data.

Matt Asay is Vice President of Community at MongoDB. He was previously VP of Business Development at Nodeable. You can reach him at [email protected] and follow him on Twitter @mjasay. View Full Bio
We welcome your comments on this topic on our social media channels, or [contact us directly] with questions about the site.
Comment  |
Email This  |
Print  |
RSS
More Insights
Webcasts
Fintech at SaaS speed: Navigating the scale & security challenge
Disaster Recovery/Business Continuity in the New Normal
More Webcasts
White Papers
Research from STL Partners and Vertiv Reveals Why Telcos Should Prioritize Efficiency and Sustainability in 5G Network
Bandura Threat Intel Integrations Infographic
More White Papers
Reports
A Practical Guide to Enabling 5G Deployments
2021 Application Security Statistics Report Vol.1
More Reports

This is actually 100 percent spot on. The word "big data" has already become a byword along with "context" and yet only a few people really understand them. The herd mentality certainly hits a soft spot to me, as well, because that's how I see most of these companies do: just because everybody is doing it, they think they have to do it too. I am not saying only a few have to do big data, but again, it's about understanding the reason why it should be done in the first place. With understanding of the vision and/or the goal comes the proper planning that helps identify the right process, people, and technology for big data.
Reply  |  Post Message  |  Messages List  |  Start a Board

I've enjoyed Matt Asay's writing on big data for some time. I'm really please that he offered this contribution to InformationWeek. Practical, real-world advice for an enterprise audience is our stock in trade, so this column is a perfect fit. I particularly like (and echo) the advice to rely on your existing staff to experiment with big data approaches to known problems.
Reply  |  Post Message  |  Messages List  |  Start a Board

"Sicular is right when she advises that it's best to look for data scientists from within, as "learning Hadoop is easier than learning the business." Interesting to hear an expert like Matt state this so succintly. We hear the same from some forward-looking CIOs. Are you listening, hiring managers?
Reply  |  Post Message  |  Messages List  |  Start a Board
InformationWeek Is Getting an Upgrade!