For knowledge workers, whose jobs consist of many tasks, the automation of a single task frees them to focus on other responsibilities. A survey of business leaders finds enthusiasm for AI as a creator of jobs and a way to deal with data.

In contrast to technical visionaries such as Bill Gates, Elon Musk, and Stephen Hawking -- who worry that artificial intelligence could become so advanced that it threatens humanity -- business leaders largely see AI as a way to enhance human endeavor.

Narrative Science, a company that sells AI to businesses, published its "2015 State of Artificial Intelligence & Big Data in the Enterprise Report" today. The report explores the attitudes of 200 respondents, including executives, data scientists, and managers, about the impact of AI on the enterprise world. For these professionals, AI is an opportunity than rather than a threat.

The report looks mainly at how enterprises are using AI to make sense of vast stores of data. More than half (58%) of respondents said they already have some form of AI such as machine learning, virtual personal assistants, decision support systems, automated reporting systems, and robotics.

[ Does automation really matter to IT? Read Driverless Cars, AI, Robots: Why CIOs Should Care. ]

"Given that we live in a world of headline and hype, it's easier to say that everyone is worried about AI killing us and taking our jobs," said Kris Hammond, Narrative Science cofounder and chief scientist, in a phone interview. "But almost everyone believes that AI is going to create more jobs." 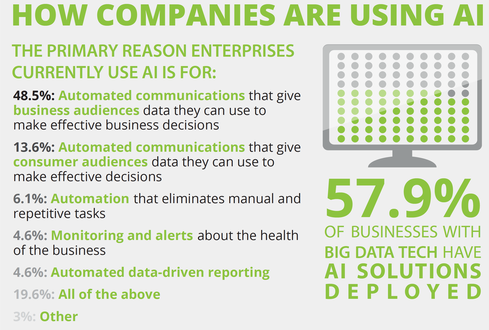 Almost everyone among the business executives surveyed -- a group that Hammond concedes may have some bias as beneficiaries of AI-driven business processes -- may believe in the benevolence of AI. But there are also those who speculate that AI will eliminate jobs. A 2013 report from Oxford Martin School's Program on the Impacts of Future Technology suggests that "about 47% of total US employment is at risk" from automation. In January, Andrew Ng, chief scientist at Baidu, expressed similar concerns about the potential for AI to eliminate jobs.

AI will both create and eliminate jobs, as technology has done in general throughout the industrial era. What remains uncertain is whether there will be more creation than destruction, and whether those left without jobs will be able to adapt to the demands of new positions.

Hammond observed that factory automation has been eliminating certain kinds of jobs for decades. "Lifting heavy things and positioning things in exact locations turn out to be something machines do phenomenally well," he said.

It's different among knowledge workers, Hammond suggested, where jobs consist of many tasks and the automation of a single task frees the worker to focus on other responsibilities. To date, he said, AI systems have been aimed at specific tasks, rather than whole jobs. And he expects that will continue.

"If you have IBM's Watson providing medical diagnostics, it's not doing the entire task of being a physician," said Hammond. "It's helping with one aspect of that."

On Wednesday, Gartner issued a related report, "Smarter Machines Will Challenge the Human Desire for Control."

"As smart machines become more capable (and more affordable), there is no doubt that they will be more widely deployed in multiple roles across many industries, replacing some human workers," the report says.

Yet, Gartner's report also predicts that new industries and jobs will emerge. Rather than second-guessing whether there will be a net job gain or loss, Gartner analysts Stephen Prentice, Dale Kutnick, and Tom Austin argue that CIOs need to educate others; evaluate the risks and rewards of increased machine-driven decision-making and unrestrained data gathering; and stem potentially damaging misinformation about unstoppable machines that may emerge as AI plays a larger role in companies.

To put it another way: The goose that lays the golden eggs depends on artificial intelligence and must be chained and pampered at the same time. It's a thankless job but someone's got to do it, at least until management can figure out how to automate the position.

Thomas Claburn has been writing about business and technology since 1996, for publications such as New Architect, PC Computing, InformationWeek, Salon, Wired, and Ziff Davis Smart Business. Before that, he worked in film and television, having earned a not particularly useful ... View Full Bio
We welcome your comments on this topic on our social media channels, or [contact us directly] with questions about the site.
Comment  |
Email This  |
Print  |
RSS
More Insights
Webcasts
Unifying Your Endpoint Security Strategy
Monitoring the Invisible - Digital Experiences in a Zero Trust World
More Webcasts
White Papers
Are Your Managed Services Right for Your Business?
Forrester Total Economic Impact Study: Team Cymru Pure Signal Recon
More White Papers
Reports
Increased Cooperation Between Access Brokers, Ransomware Operators Reviewed
The State of Malware Threats
More Reports

I assume that the survey was actually answered by several thousand AIs that answered the phones.

I think the fear is the tipping point where AI no longer augments people but can replace them. So the study isn't surprising. If you flip the question to a 25 year outlook, I bet the answer changes.
Reply  |  Post Message  |  Messages List  |  Start a Board

David, that's a good point, but the way I would say it is, artificial intelligence will slowly eliminate many jobs as we know them, while creating new ones. My question is whether the new economy will create more jobs than the old one. The new jobs will be different for sure. In your 25 year period, I think the amount of time that humans devote to their jobs will be cut in half. If the new economy only creates as many jobs as the old one, we'll be fine. The number of total jobs can shrink and we'll be fine. What will hurt, as you suggest, is that the new jobs will have high level, stiff requirements and some segment of the population may get shut out from them. And that's a troublesome thought.
Reply  |  Post Message  |  Messages List  |  Start a Board

If the jobs being created are presently non-automatable tasks like driving people around for Uber, that's not so great if the jobs lost paid better and had benefits.
Reply  |  Post Message  |  Messages List  |  Start a Board

@Thomas that's an important point. It's not necessarily a wash to lose some and gain some -- if the gain holds less value than the loss.
Reply  |  Post Message  |  Messages List  |  Start a Board
InformationWeek Is Getting an Upgrade!