Basho, the developer and support provider behind the Riak open-source database, on Tuesday announced a set of sweeping upgrades with the release of Riak Enterprise 2.0. The short list of improvements includes prebuilt data-type functions, a complete redesign of Riak Search based on Apache Solr, and a performance-enhancing "hot data" bucket that's stored on solid state disks (SSDs).

Riak is an eventually consistent key value store known for handling super-high-scale, global deployments with aplomb. As such, the database competes head-on with Apache Cassandra, the open-source database supported by DataStax. With Riak's 2.0 release, Basho is sticking with familiar update themes for nearly every NoSQL database provider -- improving performance and security while easing development and administration -- but the particulars are important.

Riak Enterprise 2.0 adds support for what Basho calls pre-built data types, but think of them as popular functions. With eventually consistent databases, you have to figure out how to resolve write conflicts when people and machines are doing data updates all over the world. Previously, developers had to come up with the application logic, but with prebuilt data types, Riak Enterprise now has ready-made ways to handle sets, flags, registers, maps, and counters.

Sets are used to resolve things like items in shopping carts or connections or followers on social networks. Flags can indicate, say, which tweets have been retweeted, which content objects have been shared, or which users on LinkedIn are premium users. Registers handle fixed sets that change with frequency, such as "trending now" entities or top-ten lists. Maps can nest several prebuilt data types. For example, you might want to map user profiles containing flags (for notifications) and counters (for number of visits or social connections).

Developers can now harness these prebuilt data types to avoid repeatedly building, testing, and maintaining such features. Ease of development was also the motivation for Basho's complete redesign of Riak Search. This feature was previously home-grown, and many developers chose to integrate more powerful open-source search options available from Lucene and Apache Solr. 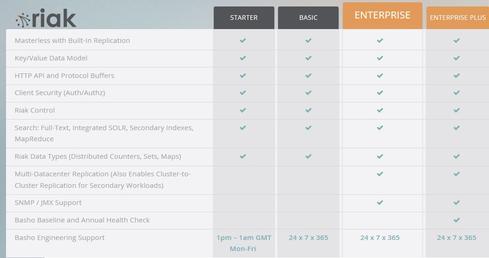 Seeking to simplify matters, Basho chose to make Solr the underlying technology for Riak Search so that it runs on the same database instances. Thus, developers can tap advanced Solr search features, such as geospatial location capabilities, that weren't previously available through Riak Search.

In an upgrade aimed at performance improvement, Riak Enterprise 2.0 has created a new SSD storage option. The second storage bucket lets you specify hot data that you want to store on fast SSD for faster performance while continuing to store the bulk of data on conventional spinning disks. The feature was developed with low-latency needs such as mobile ad delivery in mind.

Other updates to Riak Enterprise 2.0 include improved security and simplified configuration management. The software is available immediately, and version and pricing details reveal that the upgrades detailed above are also included in the Riak 2.0 community edition release.

Doug Henschen is Executive Editor of InformationWeek, where he covers the intersection of enterprise applications with information management, business intelligence, big data and analytics. He previously served as editor in chief of Intelligent Enterprise, editor in chief of ... View Full Bio
We welcome your comments on this topic on our social media channels, or [contact us directly] with questions about the site.
Comment  |
Email This  |
Print  |
RSS
More Insights
Webcasts
What We Can Learn from Sports Analytics
Protecting Your Enterprise's Intellectual Property
More Webcasts
White Papers
Passwordless: The Future of Authentication
The State of Threat Detection and Response
More White Papers
Reports
2020: Threats in Review
Special Report: The Changing Face of Threat Intelligence
More Reports

Basho has about 150 enterprise customers, including the likes of Best Buy, CISCO, The Weather Company, and Yahoo! Competitor DataStax claims to have more than 300, and it recently landed a $106 million mega-round of VC investment. Basho's last VC round with $11.5 million in 2012.

Bryson Koehler, The Weather Company's CIO, has vouched for operational simplicity as the reason why his company chose Riak over Cassandra as the basis of a massively scaled platform.
Reply  |  Post Message  |  Messages List  |  Start a Board
Editors' Choice
Hot Topics