Sometimes less is more. Dell is counting on this formula in a business intelligence and analytics makeover aimed at reducing spending on redundant technology by consolidating data platforms and standardizing on BI tools while giving business users more options for self-service and deep analytics.

Dell's BI plan was hatched two years ago, long before the $57-billion-plus annual-revenue hardware giant went private. The company assessed its IT and business intelligence capabilities and agility by surveying more than 130 business executives, and it didn't like what it saw. IT was spending some $50 million annually on data warehousing, business intelligence, and analytics. But Dell learned that business units were spending another $70 million, collectively, on independent data-management, BI, and analytics initiatives.

"When we looked at that $70 million BI spend in the business, 70% of it -- or about $50 million -- was spent taking data out of the IT environment and putting it back together in their own databases and customer-support systems," said Rob Schmidt, Dell's executive director for IT, analytics, and business intelligence. "We looked at that and asked, 'how can we reduce that big, $70 million chunk?'"

[Want the latest on BI and big data staffing? Read 2014 US IT Salary Survey: BI & Analytics.]

The answer was to build a developer-friendly architecture around centralized resources including the company's 200-plus-terabyte Teradata enterprise data warehouse (EDW) and centralized SAS analytics environment. The idea was to give the business better access to data, more development and analysis capabilities, and more autonomy on an IT-provisioned, centralized framework.

Work got underway 18 months ago on a three-tier architecture that lets business units (each of which has its own DBAs and BI developers) access data and add and drop tables as it sees fit. 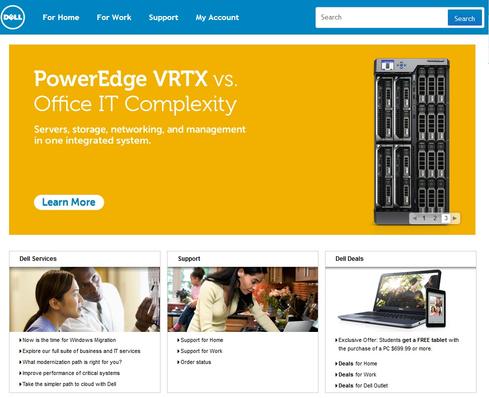 "We're moving to a platform where the business develops its own applications, but they migrate them up into our second tier, where we automate and put processes around the applications," Schmidt explains. "The third tier is our production data warehouse, which the business can't touch."

The technologies in use haven't changed dramatically through the initiative. Teradata and SAS were already in use, as were MicroStrategy and Tableau Software, Dell's standardized choices for production reporting and ad-hoc data exploration, respectively. The real challenge was process change, as business units signing on to take part would no longer be able to extract data and go their own way.

"We're teaching and certifying each business unit to develop against our data platforms," said Schmidt. "And there's a formal agreement between myself and a VP in each business that lays out what you can and can't do on the platform."

"Thou shalt not" rules include limits on extracting data from the data warehouse and writing queries against certain tables that will bring the database to its knees. Schmidt said the certified DBAs and developers within each business unit know he'll "take away access in a heartbeat" if something starts to impact the production environment.

In exchange for giving up their silos, the business units get access to more data and better capabilities than they ever had in their independent reporting and analytical environments, according to Schmidt. New capabilities include a Hadoop cluster for high-scale, low-cost storage and a Teradata Aster

The level of IT spending vs. business-unit spending on BI and analytics revealed within Dell is telling. Do you think your organization would be surprised to learn that business spending it outstripping (and in many cases unnecessarily duplicating) what IT spends to support BI reporting and predictive analysis? Sprawling data marts are just one example of duplicative spending. Dell figures it's going to save on database licenses, BI licenses, and analytics licenses by centralizing. Instead of each business unit creating its own data fiefdom, they're learning to play nice and exploit what Schmidt says are better capabilities on shared platforms.

Would this approach make sense at your organization? Are the savings oversold?
Reply  |  Post Message  |  Messages List  |  Start a Board
InformationWeek Is Getting an Upgrade!