Does Your Company Need A Chief Data Officer? - InformationWeek

Companies that have CDOs tend to perform better than those without, according to a report from Forrester.

Companies with strong revenue growth are more likely to have a chief data officer (CDO) than organizations with less impressive financial performance.

The report is based on a Forrester survey of  3,005 business and technology decision-makers located in Australia, Brazil, Canada, China, France, Germany, India, New Zealand, United Kingdom, and United States from companies with 100 or more employees. The survey was fielded from January to March 2015.

Gene Leganza, a Forrester analyst and co-author of the report, said in a phone interview that while correlation with higher financial performance should not be construed as causation, "The data does seem to support that higher performing companies are just better with data."

Not every company needs a CDO. Neither Netflix nor Uber has one, according to the report, and both demonstrate effective use of data. 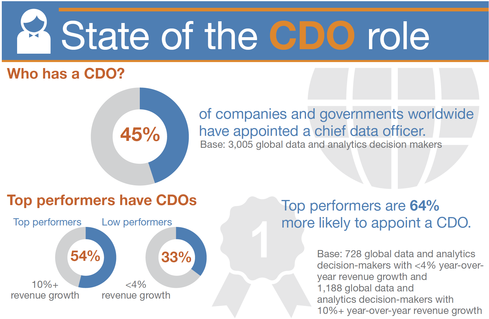 But companies with CDOs recount a variety of benefits. According to Forrester, organizations with a CDO are 70% more likely to ensure compliance and reduce risks and 60% more likely to increase business agility than those without a CDO.

The relative scarcity of the position reflects an uncomfortable truth for many companies: They aren't sure how to derive value from their data. Forrester's report argues that companies often lack the capabilities, comptence, and culture to turn data into actionable business decisions. Hiring a CDO doesn't necessarily ensure competency with data, but it can indicate commitment to that outcome.

The role of the CDO varies across organizations, but it generally includes data management, data governance, data analysis, and/or the delivery of insights.

About a third of CDOs report to CIOs, according to Forrester. Another third report to the CEO. While this could create a sense of rivalry with the CIO, Leganza said there's less conflict than one might expect. "Whether CDOs report to the CIO or the business side, there's a great deal of collaboration," he said.

The report argues that CDOs and CIOs have what amounts to business superpowers when they collaborate. "The CIO-CDO relationship is nothing short of the Hanna-Barbera's Wonder Twins 'shapeshifters' who transform themselves into various forms to solve the world's problems," it says.

The reason organizations appoint a CDO is often because they feel the responsibilities would be too much to put on the CIO's plate, said Leganza. And CIOs are generally supportive because they realize that. "Most of the CIOs we talked to are very happy to have their organization invest in data improvements because they don't have time to do it."

Thomas Claburn has been writing about business and technology since 1996, for publications such as New Architect, PC Computing, InformationWeek, Salon, Wired, and Ziff Davis Smart Business. Before that, he worked in film and television, having earned a not particularly useful ... View Full Bio
We welcome your comments on this topic on our social media channels, or [contact us directly] with questions about the site.
Comment  |
Email This  |
Print  |
RSS
More Insights
Webcasts
The Failures of Static DLP and How to Protect Against Tomorrow's Email Breaches
ROI and Beyond for the Cloud
More Webcasts
White Papers
A Technical Deep Dive on Software Exploits
Top Threats to Cloud Computing: The Egregious 11
More White Papers
Reports
Assessing Cybersecurity Risk in Todays Enterprises
The Malware Threat Landscape
More Reports

Hailing from an IT background and currently in the management of a fortune 500 company I can clearly say that a CDO really is needed, just as Data Scientists are needed. The entire enterprise is going into the cloud and that would require wise and precise decisions involving large array of data sets and how to gain revenue from those data sets. This cannot be done by any regular cloud officer. No. This kind of thing needs a CDO who knows how to use that data and how to leverage it when taking business decisions and reporting it to the higher ups.
Reply  |  Post Message  |  Messages List  |  Start a Board

As far as concerns go regarding the CDO-CIO vs CDO-CEO conflict, I think if a person understands what his company stands for, then he/she would never let petty rivalries come in the way, and CEO's understand that more than CIOs. A common ground can always be met and opportunities that present itself (as per reported by the CDO) can be discussed and debated over.
Reply  |  Post Message  |  Messages List  |  Start a Board

I recently read another interesting report from the Aberdeen Group that revealed that "Over the last 12 months, tokenization users had 50% fewer security-related incidents(e.g., unauthorized access, data loss or data exposure than tokenization non-users".

Nearly half of the respondents (47%) are currently using tokenization for something other than cardholder data. The name of the study is "Tokenization Gets Traction".

Aberdeen has also seen "a steady increase in enterprise use of tokenization as an alternative to encryption for protecting sensitive data".

In my opinion I think CDO is a good concept. I think this suit well for the organizations which sell customer data.
Reply  |  Post Message  |  Messages List  |  Start a Board

I agree. At the same time I think he/she should be responsible in data governance and quality of the data.
Reply  |  Post Message  |  Messages List  |  Start a Board

Sachin, if petty rivalries do exist between leaders in the C-suite, whether it's between the CIO and CDO or the CMO and the CIO or whoever, that ultimately falls on the CEO for creating a culture where such strife can persist, whether the CEO is creating it on purpose or out of negligence.
Reply  |  Post Message  |  Messages List  |  Start a Board

Should CDO data responsibities be solely on internal data? or should it include external data such as risks from the Ashley Madison data breach?
Reply  |  Post Message  |  Messages List  |  Start a Board

While in this data drivenworld you may want a CDO, you must question the assumption that if you have a CDO you will be a top performer. It may be that because those companies were top performers they can allow a position for a CDO, not that the CDO is causing the top performance. If you don't have the funds you can't offer a CDO position, so while you may see a CDo position correlated with top companies you need to delve into the data of the situation to determine if the CDO made them top performers or top performers were simple more able to hire a CDO.
Reply  |  Post Message  |  Messages List  |  Start a Board
Editors' Choice
Hot Topics