Exelon is GE's latest marquee customer for Predix, the company's analytics system for powering the industrial Internet. Exelon has installed Predix at each of its electricity generating facilities, supporting a wide variety of equipment, and will rely on the software to supply it with machine learning for its facilities' future operations.

Exelon is one of the largest electricity suppliers in the US and the largest so far to adopt the Predix analytics system. It's planning to use Predix to collect data on nuclear, natural gas and hydroelectric generating plants, as well as wind-turbine farms, said Brian Hoff, director of corporate innovation at the firm, in an interview with InformationWeek.

As the largest operator of nuclear power plants in the country, the firm generates a total of 32,700 megawatts of power through all its sources; 59% of the total comes from nuclear facilities. They include 23 nuclear reactors at 14 different sites.

"All the operational data goes directly into Predix," said Hoff, along with six years of pre-existing data on the nuclear power plants. Exelon's generating equipment was already instrumented and has been generating data on its operations. By collecting all the data in the GE hosted Predix cloud -- instead of spread across many systems -- it can be brought together for analysis and machine learning. Machine learning accumulates repetitive data from machine operations to establish a norm, then detects conditions that give rise to anomalies signaling operational trouble or potential failures. 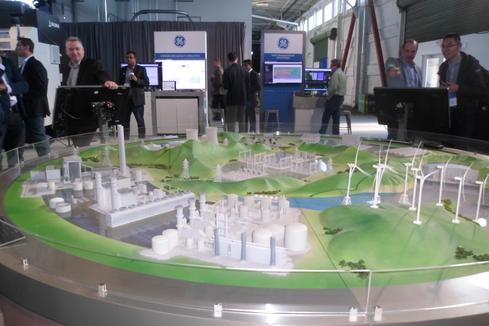 Exelon was an early adopter of Predix on an experimental basis and has accumulated a year's worth of wind farm data the system. But Exelon appeared at GE's annual Minds & Machines event in San Francisco last week to declare that it's all-in with Predix for all types of generating equipment. It will take two more years to get "the entire fleet (of generation units) up and running" and feeding data into Predix systems, Hoff predicted in the interview.

In doing so, Exelon's first goal is to implement better performance management of its generating plants. The longer range goal is to better assess the state of the equipment and maintain it in such a way as to prevent unscheduled outages, Hoff said.

"We want to improve equipment reliability," he noted. And Exelon believes it can do so by improving the collaboration between its existing, physical plant monitoring stations and the data analyzed by Predix. Generating turbines and related equipment usually produce vibrations and temperature variations that show up as anomalies in the operating data long before the equipment actually fails, he noted.

In addition, the Predix system has access to data on turbines run by Exelon as well as many other GE customers, said Hoff. Conditions that preceded failures at other customer sites can be isolated and used as alerts for operators in Exelon facilities.

It's not a matter of spotting one potential, isolated failure, Hoff continued. "It's more a process of continuous learning. We can look across the entire fleet, plus GE can ask whether a condition is normal or not" across its entire customer base, he said.

In addition, the use of Predix brings the analytics closer to real time as opposed to taking detailed looks at historical data. Algorithms are run against the data flow as it comes into Predix, giving those responsible for operations the alerts and information they need to avert slowdowns and outages.

Charles Babcock is an editor-at-large for InformationWeek and author of Management Strategies for the Cloud Revolution, a McGraw-Hill book. He is the former editor-in-chief of Digital News, former software editor of Computerworld and former technology editor of Interactive ... View Full Bio
We welcome your comments on this topic on our social media channels, or [contact us directly] with questions about the site.
Comment  |
Email This  |
Print  |
RSS
More Insights
Webcasts
Key technology trends in 2021 - Making these technologies work for your business
Cybersecurity's Next Wave: What You Should Know
More Webcasts
White Papers
Sunburst: Impact and Timeline
Definitive Guide to Endpoint Privilege Management
More White Papers
Reports
Assessing Cybersecurity Risk in Todays Enterprises
2020 State of Cybersecurity Operations and Incident Response
More Reports

Exelon is also a user of "digital twin" technology and created digital twins on a pilot basis at its natural gas generation plant in Colorado Bend, Texas. Digital twins are virtual models, based on engineering plans and operational data, of the real asset. GE is pioneering their use and Gartner says they'll be big in 2017.