Using a single learning algorithm, Google's AI agent has developed its video game skills to the point where it can beat most human players in dozens of different games.
8 Google Projects To Watch in 2015
(Click image for larger view and slideshow.) 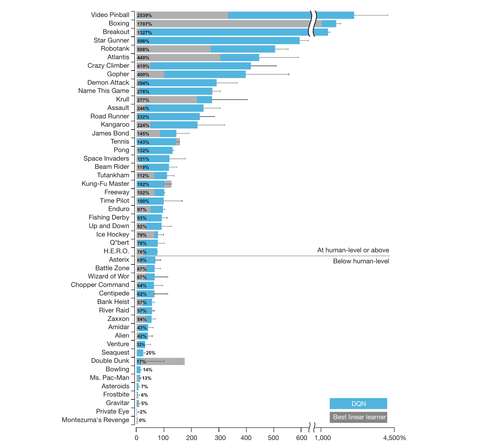 Thomas Claburn has been writing about business and technology since 1996, for publications such as New Architect, PC Computing, InformationWeek, Salon, Wired, and Ziff Davis Smart Business. Before that, he worked in film and television, having earned a not particularly useful ... View Full Bio
We welcome your comments on this topic on our social media channels, or [contact us directly] with questions about the site.
Comment  |
Email This  |
Print  |
RSS
More Insights
Webcasts
Protecting Your Enterprise's Intellectual Property
5 Steps to Solving Modern Scalability Problems
More Webcasts
White Papers
The State of Threat Detection and Response
Research Report: Evaluating Your Organization's Cybersecurity Readiness
More White Papers
Reports
How Data Breaches Affect the Enterprise (2020)
The Future of Multi-Cloud Networking 2020
More Reports

@Nemos- Funny enough, I pikced it, because I don't play Call of Duty but I know I could still beat a computer at it. I play Destiny has my group shooter. :)
Reply  |  Post Message  |  Messages List  |  Start a Board

We have to play then hehehe as when I am playing call of duty I feel in a way like a machine ;) ,

(I am joking) which version is your favorite @David ?
Reply  |  Post Message  |  Messages List  |  Start a Board

Great, now computers can do stuff i did at 5 years old. Wake me up when they can beat me at Call of Duty. :)
Reply  |  Post Message  |  Messages List  |  Start a Board

@Nemos- I can't say I'm worried about my freedom so much as i'm wondering if making machines that think like us is just a bad idea. We're actually really lousy thinkers. I wish we'd create machines that thought like someone better. :)
Reply  |  Post Message  |  Messages List  |  Start a Board

Actually, I am getting a bit worry about this and relative news. I strongly believe that as long we create A.I machines with similar logic to humans we slowly slowly underestimate our freedom and of course I don't mean any fiction scenario that the machines will control the humans. Take the web example, do you remember how flexible was before 15 years and check how is today....
Reply  |  Post Message  |  Messages List  |  Start a Board

@Sunita: I know the drone delivery system has been widely criticized but I don't think people will go all out against all AI related applications. AI is the future and there are several useful applications that will spring out of research projects like these. I don't think it'd be fair to criticize them all.
Reply  |  Post Message  |  Messages List  |  Start a Board

The news delivery system is not against the technology rather its use and can be used in much better and productive ways. Similar will be the case with the adaptive API, i think it will be helping the companies in better analysis and making thoughtful decisions.
Reply  |  Post Message  |  Messages List  |  Start a Board

The use of adaptive AI has to be controlled. Just look at the waves of controversies the drone delivery system is getting, do you really think the media will go easy on this one?
Reply  |  Post Message  |  Messages List  |  Start a Board

The value for business in creating a adaptive AI is that it is smarter than the "C suite" running the company in most instances.
Reply  |  Post Message  |  Messages List  |  Start a Board
Editors' Choice
Hot Topics