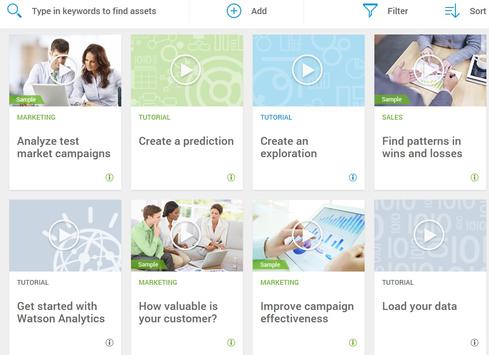 Doug Henschen is Executive Editor of InformationWeek, where he covers the intersection of enterprise applications with information management, business intelligence, big data and analytics. He previously served as editor in chief of Intelligent Enterprise, editor in chief of ... View Full Bio
We welcome your comments on this topic on our social media channels, or [contact us directly] with questions about the site.
Comment  |
Email This  |
Print  |
RSS
More Insights
Webcasts
4 Practical Tips for Building a Data Lake
The Experts Guide to Ransomware Response
More Webcasts
White Papers
Guide to Enabling 5G Deployments
Top Serverless Security Risks and How to Mitigate
More White Papers
Reports
Cloud Misconfiguration Mayhem
The State of CCPA 2021
More Reports

Does strike me the run a risk of undermining the Watson brand when they attach the label to a nifty analytics tool that has little or nothing to do with their big data/cognitive computing tech.
Reply  |  Post Message  |  Messages List  |  Start a Board

How nice feedback, and Watson Analytics is only to get better and better as well. Since I had a login problem I haven't been able to try it yet so what you said is really nice and encouraging. :)

If very many data analysts are having experiences like TerryK's below, Watson is going to outlive its namesake, IBM founder Thomas J. Watson, who died at the age of 82..
Reply  |  Post Message  |  Messages List  |  Start a Board

@TerryK, thanks for chiming in. How approachable do you think it is for business users?
Reply  |  Post Message  |  Messages List  |  Start a Board

I registered for the beta some time ago and got my first crack at Watson Analytics this morning. As the screen shot above shows, there are plenty of tutorials available. That's either a warning sign (you mean it's not intuitive enough to use on its own?) or an indication that IBM is being extra careful to offer plenty of training wheels.

Thus far I've only watched the tutorials (and haven't loaded and analyzed data), but my initial impression is this is more like a data-analysis studio rather than a simple data-analysis tool. You're presented with multiple data-loading and data-cleansing options followed by multiple data-analysis options and use-case scenarios. It may feel intuitive to a data analyst, but I'm thinking business users will need some time to get comfortable.
Reply  |  Post Message  |  Messages List  |  Start a Board
InformationWeek Is Getting an Upgrade!