50%
Tweet
At IDF, Intel execs discuss how an Intel-powered Internet of Things could lead to personalized cancer treatments.

At this week's Intel Developer Forum (IDF), CEO Brian Krzanich reiterated his goal, stated last year at the same event, to put "Intel in everything." More powerful and energy-efficient processors for PCs and tablets are a big part of this effort, but Intel's purview has expanded over the last year, branching into new datacenter technologies, big data, wearable devices, and the Internet of Things (IoT).

Krzanich and his colleagues repeatedly characterized these surging tech trends as symbiotic forces. IoT and wearable devices are "very interconnected" because both rely on sensor-equipped objects that send information back to a data center for processing, Krzanich said during a Tuesday keynote. He likened industrial IoT applications to "wearables for machines."

Krzanich said over 2 billion devices currently use Intel chips, but that by 2020, over 50 billion connected devices will be on the market. This possibility raises clear opportunities for Intel: Scores of new devices will need scores of new processors, after all. 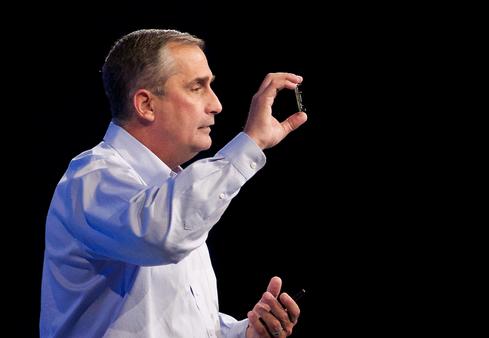 Moreover, data center chips will need upgrades too, to help manage the exponential increase in traffic these devices will cause. Connected devices "are nothing without the data center," said Intel VP and Data Center Group GM Diane Bryant. She said today's smartphones generate more than 1 trillion daily data center transactions but that wearable devices will be even bigger, encompassing over half the app economy by 2017.

"Data analytics is the next big technology disruptor," Bryant stated, adding that big data is a "collective opportunity [that will] transform all industries."

Krzanich explained more explicitly why those who pursue this alleged opportunity should include Intel. He said his company's technology ensure all the edge devices slurping up data have a reliable gateway to send information back to a data center.

This sort of logic is part prophesy and part sales pitch. It's true that wearable devices and IoT are burgeoning forces, with consumer examples already ranging from connected basketballs to Apple's new smartwatch. It remains debatable how large IoT will become, however, and just how many dumb objects can be made useful with an Intel-flavor makeover (or an Apple-flavored one, for that matter).

Like Cisco and other IoT champions, Intel has launched a variety of efforts to convince partners and the public of IoT's disruptive potential. Bryant highlighted healthcare as "the biggest big data opportunity," both because it involves a lot of data (and will involve even more as wearable devices gain steam), and because the medical industry is relatively open to tech adoption. She also said Intel plans to use IoT and big data to cure diseases, including cancer.

Bryant said the company was working with the Michael J. Fox Foundation on wearable devices that could help doctors and patients better understand Parkinson's Disease. She also said Intel is working with the Knight Cancer Institute to build a cloud that will integrate genomic data, clinical data, and other information into a 1.25-PB system. Intel hopes that number-crunching all of this data will help enable individualized cancer treatments.

"Our objective, by working together, we will sequence a whole genome, and identify the fundamental genes that cause cancer and the means to block them through personalized precision treatment, all in one day, by 2020," Bryant said.

The real star of the show as these efforts play out will be the ability to collect, clean, store and most importantly process data in a timely manner that leads to meaningful and actionable insights.  Regardless of how many things we add to the equation, IoT will suffer without the analytic abilities in house first. The analytic culture serves as the foundation. According to a recent SAS survey less than 16 percent of organizations rate themselves as highly capable in these areas. The potential is there but the foundation needs more for success to arise.

Indeed, there's a lot of competitors on the scene now. ARM is a big on as you said, though AMD could also weigh in as it's shown some real dominance in the small form factor PC markets.

Nvidia has some real powerhouse chips too, though they're being put into vehicles rather than wearables at the moment. However its Tegra line is powering high end smartphones and tablets, so there's no reason the next version coulldn't have a wearable iteration.

And then of course there's Qualcomm to watch out for.

Intel might have lofty goals, but the chip and SOC manufacturing space is much more crowded than it used to be.
Reply  |  Post Message  |  Messages List  |  Start a Board

Intel wants its processors in mobile and wearable devices and many will end up there. But the x86 instruction set, with its many slightly varied iterations, is showing its age. It's not always the first choice for modern devices, where lightness of instructions and ease of power saving must play a greater role. ARM has advantages in that arena and some more modern chip architecture may yet emerge. Intel is trying to reform x86 for the modern world; we shall see.
Reply  |  Post Message  |  Messages List  |  Start a Board