IT executives expect the IoT to impact their businesses, although they're not sure how, finds CompTIA survey.

The terms "big data" and "Internet of Things" have a lot in common. Both represent significant technological trends involving the collection, storage, and analysis of vast sums of digital information. Both have been hyped to the max and usurped by marketers. And both have left many a businessperson -- even tech sophisticates like IT executives -- scratching their heads and wondering what these latest buzzwords are all about.

In that context, perhaps the findings from a recent survey of IT executives by the Computing Technology Industry Association (CompTIA), an IT trade group, aren't too surprising. The report, "Sizing Up the Internet of Things," found that IT execs believe the Internet of Things (IoT) will help their business in a to-be-determined fashion, but they're not really doing much to prepare for it.

CompTIA's online survey was conducted in July 2014. Nearly 300 US IT companies participated, ranging from small shops to Fortune 500 firms.

"Overall, IT industry executives are nearly evenly split on their view of IoT hype," the report stated. Specifically, 51% of respondents believe IoT opportunities justify the hoopla, while 48% "see more hype than substance at this point in time."

[What IoT technologies can improve your business? See Rise Of Things: IoT's Role In Business Processes.]

The survey also found that only 8% of IT execs have explored potential IoT product offerings. That's surprisingly low when you consider that major tech analysts, including Gartner and IDC, predict the IoT will be a several trillion dollar industry within a decade.

This hesitation may be due, in part, to the lack of standards in the Internet of Things ecosystem, where countless numbers of data-sharing sensors, devices, and software must communicate seamlessly. But as of September 2014, four major organizations -- AllSeen Alliance, Open Interconnect Consortium, Thread, and Industrial Internet Consortium -- were developing standards for the IoT.

"I think this is going to look a lot like the Internet when it got started," said Seth Robinson, senior director of technology analysis at CompTIA, in a phone interview with InformationWeek. "The Internet required certain protocols to become commonly used ... and to really be of benefit." 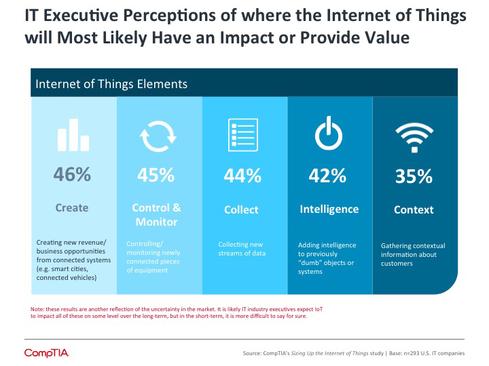 Today's IoT, however, is more like the Tower of Babel. Consider the consumer market: As people experiment with smart homes, they assume the responsibility of getting various devices to communicate not only with their smartphones but also with each other, including hardware from different manufacturers.

"It's difficult to get everything to talk to each other, and there are a lot of competing standards out there right now," said Robinson, who expects that market forces, not government regulation, will determine which IoT standards contender will "win out in the end."

IoT privacy is one area where government regulation will likely play a major role, however.

"Privacy is definitely a problem that we haven't solved yet. It's related to IT security, which is another one we haven't solved," Robinson said. "It's a very complicated matter, one I don't see resolving itself in the near future."

Privacy restrictions also may impact the prices of IoT devices, particularly if vendors are prohibited from selling consumer data they acquire from sensors and related IoT products.

"Privacy, when it comes to computing and connected devices, is very difficult to sort out," said Robinson. "So many people enjoy services at a very low price point, and I don't think they've fully realized that the low price point is there because of the data they're willing to share."

IoT vendors will need to be reasonably transparent, telling the public what data they're collecting and how they're using it. If this doesn't happen, "we're probably going to need some kind of regulations to help establish boundaries for this space," said Robinson.

How cloud, virtualization, mobility, and other network-altering trends impact security -- and the IT pros responsible for infrastructure protection. Get the Network Security Career Guide issue of Network Computing today.

The lack of standards is the same issue hampering the progress of EHR. And there, too, are the privacy issues. Is there anyone else still around who remembers the days of the Cold War when the military often ended up issuing standards by fiat? But, given time, standards will emerge, as the always do. Questions of privacy, of course, are a thornier matter.
Reply  |  Post Message  |  Messages List  |  Start a Board

The utter failure of technology vendors to make their products secure and usable by the masses is poised to bite them where it hurts.
Reply  |  Post Message  |  Messages List  |  Start a Board

"It's difficult to get everything to talk to each other, and there are a lot of competing standards out there right now"

Yes! People still use multiple remotes for TV, cable, stereo, etc. even though multi-tasking remotes were introduced decades ago. Now, there are thousands of models of phones. How will all the machines talk to each other? The API's will be interesting.
Reply  |  Post Message  |  Messages List  |  Start a Board

Internet of Things (IoT) will help their business in a to-be-determined fashion, but they're not really doing much to prepare for it.

Understood. I'm still coaching clients on the value of social media. The reality of technology is way behind what the media reports.
Reply  |  Post Message  |  Messages List  |  Start a Board
<<   <   Page 2 / 2
Editors' Choice
Hot Topics