50%
Tweet
Microsoft claims Bing can predict the future, but it is starting out with soft questions like who will win The Voice.

From Google's Flu Trends project to Nate Silver's election forecasts, data-driven attempts to predict the future continue to grab headlines. This week, Microsoft teased its interest in this emerging prognostication industry, releasing a new predictive tool for Bing. Currently, the feature only forecasts TV competition winners, but it could soon include sports matches, elections, concert ticket prices, and more.

In a blog post, the Bing Predictions Team said its technology can forecast results using Bing search queries and social media data from sources such as Facebook and Twitter. But researchers have recently criticized similar experiments, such as Google's aforementioned flu tracker, for methodological errors. Microsoft will have to prove it can turn its data into useful insights.

At launch, Bing's predictive tools apply only to The Voice, American Idol, and Dancing with the Stars. But a Microsoft website promises "predictions for winners of sporting events, most popular vacation destinations, whether concert ticket prices are going to go up, and more." The blog post contextualized Microsoft's interest around increased Bing traffic during elections, suggesting Bing's crystal ball will eventually predict political contests too.

[While waiting for predictions to come true, you may need to do some work. Read Microsoft Office: 4 Changes, Explained.]

Bing makes predictions about TV competitions by drawing inferences about a given competitor's popularity. Microsoft broadly defines popularity according to query volume, the positive or negative charge of search terms, and social media trends. The company said it calibrated Bing "to account for biases, such as regional preferences, and other measurable and observable trends." Microsoft also said Bing knows how to balance recent popularity against long term trends. According to the Bing Team's data, for example, winners on The Voice aren't necessarily those who performed best in the most recent episode, but rather those who've already developed a following.

To activate the feature, Bing users can affix "predictions" to the end of their searches -- i.e. "The Voice predictions." Results appear in a carousel display above the normal search returns.

Experts debate the extent to which search engines and social tools can predict the future. In 2008, Google claimed it could anticipate flu outbreaks by tracking queries related to influenza. The search giant has since made a variety of similar claims. In June, for example, Google said it can predict a film's box office performance with up to 94% accuracy. Researchers have also used Wikipedia and Twitter-derived user analytics to predict flu surges, while others have linked search results to stock market fluctuations. 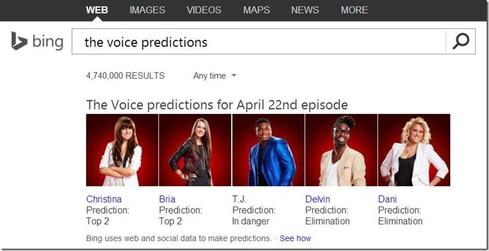 Bing now predicts the outcome of The Voice and other TV competitions (Image credit: Microsoft)

In a 2010 study, five Yahoo researchers claimed "what consumers are searching for online can predict their collective future behavior days or even weeks in advance." The study cited opening weekend box office revenue, first-month video game sales, and Billboard Hot 100 rankings as examples. Interestingly, all five researchers now work for Microsoft Research, according to their respective LinkedIn profiles.

Microsoft has repeatedly touted predictive technologies in recent months, but usually in the context of machine learning, with examples ranging from Windows Phone 8.1's Cortana, to new Office tools that infer which emails the user tends to care about. With the company now including social-scale predictions in search results, it has opened up a new world of possibilities -- but first, it will have to convince skeptics.

A March paper in the journal Science pushed the issue further, however. Researchers argued that projects such as Flu Trends can encourage a "big data hubris" in which companies ascribe empirical muster to conclusions spun from flawed number-crunching strategies. The study noted that during a 108-week stretch ending in September 2013, Google Flu Trends' weekly conclusions overestimated influenza outbreaks 100 times. The authors attributed the unreliable forecasts to a basic flaw in Google's methodology: People search for "flu" without necessarily know what influenza actually is, which means Google's data set is perverted by millions of users with flu-like ailments but not the flu itself.

Time will tell if Microsoft's Bing Team has learned to avoid such oversights.

Michael Endler joined InformationWeek as an associate editor in 2012. He previously worked in talent representation in the entertainment industry, as a freelance copywriter and photojournalist, and as a teacher. Michael earned a BA in English from Stanford University in 2005 ... View Full Bio
We welcome your comments on this topic on our social media channels, or [contact us directly] with questions about the site.
Comment  |
Email This  |
Print  |
RSS
More Insights
Webcasts
The State of IT & Cybersecurity Operations
Thinking Like an Attacker: Strategies for Defense
More Webcasts
White Papers
3 Reasons Why Your Remote Workforce is Vulnerable
Global Application and Network Security Report
More White Papers
Reports
Cyber AI: An Immune System for Cloud Security
How Enterprises Are Developing and Maintaining Secure Applications
More Reports

With sporting events, solo sports (the closest equivalent to The Voice) will be relatively easy compared to team sports. Each additional player introduces so many more variables. In one sense, though, most sports are easier to calculate because there's an established ordinal definition of winning. In artistic performances, so many of the measures are subjective.

At some point, the system for predicting the winner of the Voice could become so fine-tuned that it could predict the winner from the first perfomance. A sufficiently advanced neural net, given enough data, should be able to do it. Perhaps in the near future, one of the judges would be a computer interface. (I'm imagining a kind of Kirk-Spock-McCoy face off, with the human McCoy snarling at the Spock interface that music is about human emotions, not algorithms.)

Studio executives would probably be delighted to have a system that could be applied to audition tapes, YouTube, and so on.
Reply  |  Post Message  |  Messages List  |  Start a Board

Sports bets are notoriously difficult to get right consistently -- even with all the data on the table. I'm not convinced an analysis of Bing search queries and Facebook and Twitter data would help predict that shocking NFL playoff upset. But I'll take it over my own lazy research, which usually consists of listening to a podcast and skimming a few articles. If Bing can give betters an edge, it could disrupt an industry. Vegas definitely will not be happy.
Reply  |  Post Message  |  Messages List  |  Start a Board

This plan lets MS hone and tune its predictive tool on prognistications that don't matter in the long run (except to the singers being eliminated!) while also getting some mainstream publicity. It'll be interesting to see what the Vegas odds-makers think of the effort, especially once it branches out to sporting events.
Reply  |  Post Message  |  Messages List  |  Start a Board
Editors' Choice
Hot Topics