The new capabilities, released in late June in Pentaho's 5.1 release, enhance the company's already strong presence in the world of big data by bolstering data preparation for predictive analysis.

"The big 'aha' in getting a return on analyzing a petabyte of information is being able to predict what the customer is going to do next, whether that's buy something, commit fraud, or churn," said Quentin Gallivan, Pentaho's CEO, in a phone interview with InformationWeek. "Our vision is to befriend the data scientist by building a studio where they can orchestrate and profile their data and then use their tool of choice for prediction."

Support for YARN, the management layer introduced in Hadoop 2.0, is crucial to that vision because it enables Pentaho's analytics studio to operate directly on top of all the data stored in Hadoop while also taking advantage of its distributed processing power. The studio supports data orchestration, data cleansing, and data profiling, and with a Data Science Pack included in Pentaho 5.1, that functionality is integrated with Pentaho's Weka data-mining tool and with the popular open-source R library with support for parallelized processing.

The Data Science Pack included with 5.1 allows R scripts as well as Weka scoring and forecasting models to be run on Pentaho Data Integration. Future releases will add data-prep support for tools including SAS, Metlab, and Mahout, said Gallivan. 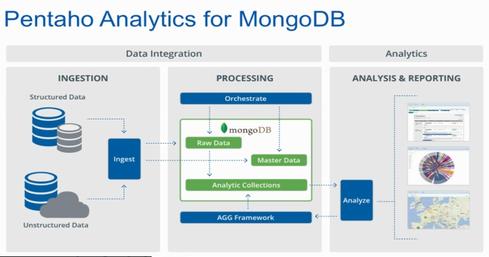 "We transform the JSON to run effectively in an MDX [OLAP] environment," Gallivan explained. "MongoDB users want the richness of a data-discovery environment with data visualization against native JSON."

Pentaho's open-source software is used by more than 20,000 organizations. Among these, more than 1,500 customers pay for enterprise software and support, and at least 250 have successful big-data deployments, according to Gallivan. As Gallivan detailed in a recent interview, most of those customers fall into one of five deployment scenarios: 360-degree customer view, Internet of Things, data warehouse optimization, big-data refinery, or data security.

Doug Henschen is Executive Editor of InformationWeek, where he covers the intersection of enterprise applications with information management, business intelligence, big data and analytics. He previously served as editor in chief of Intelligent Enterprise, editor in chief of ... View Full Bio
We welcome your comments on this topic on our social media channels, or [contact us directly] with questions about the site.
Comment  |
Email This  |
Print  |
RSS
More Insights
Webcasts
Keys to Better Cyber Risk Assessment
Take DevOps to the Next Level
More Webcasts
White Papers
CPRA: The Simple Guide
Annual Cybercrime Report
More White Papers
Reports
We Need Your Input: Trends in Workforce Optimization
2021 Top Enterprise IT Trends - Network Computing
More Reports

How will Pentaho monetize this? The number of customers paying for enterprise support doesn't seem all that high.
Reply  |  Post Message  |  Messages List  |  Start a Board

Sorry, but I guess the headline is potentially misleading. Data-prep on Hadoop is in service of predictive analysis (done with tools such as Pentaho Weka, R, or, soon according to Pentaho, SAS or Metlab). The support for MongoDB is a separate thing, only for BI/data-visualization style analysis (not predictive work) on the data managed by MongoDB. The two are not connected other than the fact that they are both capabilities introduced in Pentaho 5.1.
Reply  |  Post Message  |  Messages List  |  Start a Board

To "befriend the data scientist" is no easy task. It's all too easy to be a friend to few, stranger to many. The combinatin of Hadoop with YARN on top for data prep, with the rsults plugged into MongoDB sounds like a powerful system -- as long as the movement between the two of them is smooth.
Reply  |  Post Message  |  Messages List  |  Start a Board

When Hadoop first emerged, we all heard it would displace ETL. That's at least partially true, for some transformation processing, but now data-integration vendors -- like Informatica, Paxata, and, now Pentaho -- are saying their stuff is needed for all sorts of data prep and processing ahead of big-data analysis. It's another case of offering an alternative to clunky MapReduce processing, but I haven't talked to enough customers who have validated how useful these tools can be in big-data-analysis scenarios.

The "80% of the work" line above seems like a relic of relational data warehousing approches, but I need to hear from more practitioners -- yes, this is a naked plea for comments from practitioners -- before passing this off as an overstatement or marketing ploy.
Reply  |  Post Message  |  Messages List  |  Start a Board
InformationWeek Is Getting an Upgrade!