Salesforce taps its new Wave Cloud with its first analytics application, Sales Wave Analytics, which draws data from many sources.
IT Hiring, Budgets In 2015: 7 Telling Stats
(Click image for larger view and slideshow.)

Eight months ago, Salesforce launched a potentially powerful platform, the Wave Analytics Cloud, which the company said would be able to incorporate data from both Salesforce CRM applications and outside sources. Thursday, it followed up with its first mobile application to take advantage of that platform, Sales Wave Analytics.

Users configure their Sales Wave Analytics app to pull data out of one or more of those sources and analyze it on their desktop or mobile device. "You can get it running in a matter of minutes," said Anna Rosenman, senior director of product marketing for the Wave Analytics Cloud, in an interview.

That, of course, will depend on the data available on the Wave platform, which needs to be pre-arranged via data pipelines set to load it automatically. The Wave platform doesn't connect to every data source without someone setting up the connection, but Salesforce has numerous partners ready and available to perform the task, including Informatica, Dell Boomi, IBM CastIron, and others.

Nucleus Research analyst Rebecca Wettemann said in an interview that the application's speed of implementation results from a wizard that asks a prospective user a series of questions that might, for example, direct the app to tap extensive sales data out of Cloudera and a Salesforce CRM app.

The wizard sets up dashboards that can be displayed on the user's desktop, laptop, iPad, or iPhone (initially, the application will support only Apple iOS mobile devices) to show the data and key performance indicator that the user is most interested in. 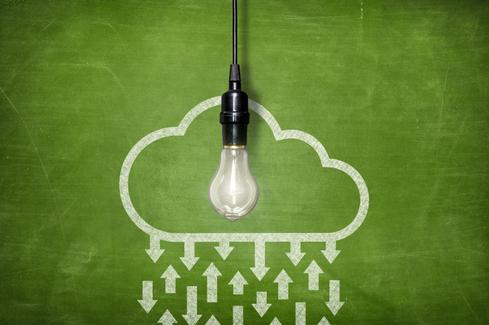 The user can set a timeframe in which to view the data and then sift through it, using the application's underlying NoSQL system that Salesforce purposely built for the Wave application. The user can also set the frequency for updates of the data viewed. In the past, an executive might have viewed the data every 30 days. With the Sales Wave Analytics app, that information can be updated daily or hourly, if the executive really wants the latest information.

"I can see in the sales data that one team is not performing well, or some deal needs to be pushed through," noted Wettemann, speaking as a potential user.

The application allows the user to call a meeting, send out a notice, change team-member tasks, or reset quotas. There's no need to leave the app to take such actions. The capabilities are built into the app, she said in the interview.

Along with Salesforce application data, Sales Wave Analytics can be directed to seek and display custom objects built from Salesforce data, such as ones that, for example, help users focus on particular types of deals or notice when a particular field, such as a customer type, is part of the sales process, she said.

The application organizes incoming data in overview categories such as: Forecast Review, Pipe Review, Team Coaching, and Business Review. Data may be organized by team or geography. Sales Wave Analytics "tells users what specific trends need to be looked at in order to maximize revenue growth," Wettemann and fellow analyst Fernando Cruz wrote in a research note.

Sales Wave Analytics is the first in what Rosenman said will be a series of Wave Analytics applications. She would not disclose the timeframe or nature of what's next in line. Each application will be a pre-packaged analytics template that can be given a role-specific set of permissions and a level of operation to match its user. A high-level sales manager might need hourly updates on current sales, a junior member of the sales team a once-a-week update.

Pipelines can be established for the regular import of data from designated sources that may include Salesforce partners Cloudera, Hortonworks, and the Google Cloud Platform. The application then knows how to group information according to category. Data on recent sales activity may be categorized by the app as Closed, Expected Close, Forecast, and Quota, giving a business executive or sales team member a quick overview of how a quarter is progressing.

Much of the data that the application works with is already used by the sales force and business analysts. However, they are laboriously gathering it in spreadsheets, stacks of email messages, and reports. Sales Wave Analytics gathers the data automatically. It can then summarize it visually. One Salesforce customer told Rosenman that data which once occupied "a 32-tab spreadsheet" and appeared once a month can now be aggregated in Wave Analytics and refreshed every day.

There are already stand-alone cloud analytics applications, such as Birst. Salesforce will seek to replace them by integrating its own CRM applications with the analytics platform and by adding to the application lineup.

Salesforce said it would disclose pricing once the product's pilot phase ends later this year. Nucleus Research estimated that it would amount to $85 per month per user for enterprise license-holders, who tend to get discounts off of list prices.

Charles Babcock is an editor-at-large for InformationWeek and author of Management Strategies for the Cloud Revolution, a McGraw-Hill book. He is the former editor-in-chief of Digital News, former software editor of Computerworld and former technology editor of Interactive ... View Full Bio
We welcome your comments on this topic on our social media channels, or [contact us directly] with questions about the site.
Comment  |
Email This  |
Print  |
RSS
More Insights
Webcasts
Unifying Your Endpoint Security Strategy
Using Cyber Underground & Blockchain Intel to Stop Cyber Attacks
More Webcasts
White Papers
Privileged Account Management for Dummies
Formulating a Robust Pivoting Methodology
More White Papers
Reports
Are We Cyber-Resilient? The Key Question Every Organization Must Answer
Enabling Enterprise Resiliency Through Cyberthreat Detection
More Reports

Sales  Wave Analytics will be challenged by the cloud-based analytics systems already out there, including Birst, Data Hero, Attensity, Adaptive Insights and BeyondCore. But it will enjoy, in addition to the interest and loyalty of the Salesforce customer base, its ease of integration with existing Salesforce applications. That's not to be sneezed at.