Sewer spills are a messy, dangerous problem inherent with antiquated municipal infrastructure. Here's how IoT and analytics are helping.

Take an antiquated system of infrastructure, neglect it, and hope that nothing goes wrong. That can be an expensive, time-consuming proposition when something actually does go wrong. It's certainly no way to manage a network -- especially if it is the network of pipes that carries sewage away from homes and businesses in your neighborhood.

When this network fails and the sewer spills over, the results are a disaster for the environment, the property owners, people in the area, and the water authority that is financially liable for the mess.

Greg Quist didn't set out to solve this problem of sewer spills back when he was studying astrophysics in college or when he went to graduate school for theoretical physics. His career started with work on stealth technology for the US government -- the kind he can't tell you about. But in opposing a residential development project in his California neighborhood, Quist accidentally fell into sewers -- as a career, not literally. 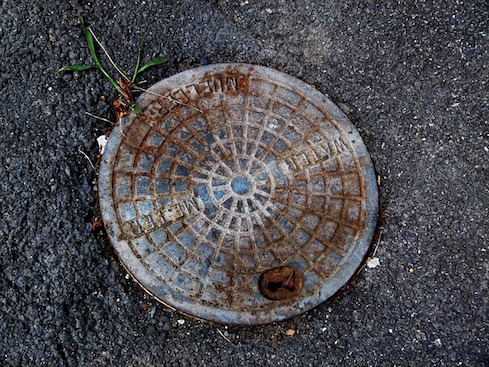 He got to know some of the politicians and public servants in the area. When the mayor asked him to serve on the local water board, Quist learned about water systems, sewers, and the problems that came with them. He applied his engineering background to a new field and his career pivoted. He told data scientists about his work during the September 2018 Strata Data Conference in New York, and he also spoke with InformationWeek in an interview about his projects.

For the past several years Quist and his company, SmartCover Systems, have been equipping sewer networks with IoT-enabled sensors, collecting data, performing analytics on that data, and hosting the data in the company's data center. The company has analyzed the sewer data and is able to detect when parts of a sewer network need maintenance.

"It's effectively like an EKG," Quist told InformationWeek in an interview. "It's like a heartbeat, and if you can see the heartbeat change, you can start detecting what's going on in the sewer system. We can alert our customers beforehand that bad things are happening."

Here's how it works. SmartCover's sensors, which use ultrasonic technology and a proprietary algorithm to detect water levels, are attached to the bottom of manhole covers. Quist said they are about the size of "George Costanza's wallet," and they are contained in pods rugged enough to protect them from the dangers of their environment -- water and sewage. These devices are smart enough to perform analytics themselves. These were devices that implemented analytics at the edge before anyone was really using that terminology. (Quist said they called it "highly distributed intelligence" back when they first deployed it in 2005.) The analytics filters the noise and sends only the relevant data -- each device sends only about 10 bytes of data back to the central servers each hour.

There are two times of day when water levels typically increase, Quist said -- in the late morning and the early evening, coinciding with when people are taking showers, flushing toilets, and cooking meals. If rises in the water levels happen against that pattern, say at 3 am, that likely indicates there is a problem.

Monitoring the water levels works two ways. It can help alert the network operator to a problem with a particular section of pipe so that maintenance can be performed to prevent a spill. Plus, using the data collected along with some analytics, organizations can develop a maintenance plan for the network that improves efficiency and reduces spills.

Problems with sewer spills typically come from two causes. Roots from trees can grow into the systems. Plus, sewers can get clogged with fats, oils, and grease -- the stuff that some people may pour down the drain after they cook. Quist said those things clog the pipes just like they clog your arteries.

Maintenance of clogged pipes involves pipe cleaning.  Water and sewage authorities may schedule such cleaning on a rotating basis, without optimizing it do more frequent work on pipes that need it most. If you can optimize the cleaning schedule by cleaning more frequently those that need it the most, you can make better use of your cleaning resources and also prevent sewer spills, Quist said.

That's what SmartCover customer, the San Antonio Water System, did. SAWS is a big sewer system with over 100,000 manhole covers, and 540 of those have been equipped with SmartCover sensors. The system has been able to drop its service bills by 75% by using data to help optimize the cleaning schedule, Quist told InformationWeek. Plus, avoiding a single spill can save a water system hundreds of thousands of dollars.

The US also has about 780 combined sewer systems -- systems that collect sewage and stormwater runoff in a single pipe for treatment and disposal. These systems, built before the Clean Water Act went into effect in 1972, are primarily in the Northeastern US. In these systems, excessive rain water and flooding can contribute to high levels and sewage spills. These systems will need to invest about $1 trillion in capital infrastructure in the next few decades to fix these issues, Quist said, but in the meantime they can better optimize their systems. For instance, some of these systems, such as the city of Newburgh, New York, must report overflows to the public and advise them on how long they should stay out of the river or other waterway.

It's a messy, dirty problem. But modern analytics and IoT systems can help improve management of these systems and their impact on the environment and the lives of residents and the operation of local businesses.

"This technology, which seems simple in the IoT and big data world, is making a huge impact on the water and waste water industries," Quist said.

Jessica Davis is a Senior Editor at InformationWeek. She covers enterprise IT leadership, careers, artificial intelligence, data and analytics, and enterprise software. She has spent a career covering the intersection of business and technology. Follow her on twitter: ... View Full Bio
We welcome your comments on this topic on our social media channels, or [contact us directly] with questions about the site.
Comment  |
Email This  |
Print  |
RSS
More Insights
Webcasts
Detecting and Preventing Insider Data Leaks
People Are The Most Important Part of Autonomous SOC
More Webcasts
White Papers
How Secure Are Your Endpoints?
Supercharge Incident Response with DDI Visibility
More White Papers
Reports
The State of DevSecOps Report
The Malware Threat Landscape
More Reports