The US Open upgrades its tech for 2014 with new data sets, improved analytics, and immersive mobile apps backed by IBM predictive cloud infrastructure.

Mobile, social, analytics, and cloud technologies have been part of the United States Tennis Association's game for some time, but, working with tech partner IBM, it's upping the ante for the 2014 US Open tennis tournament. 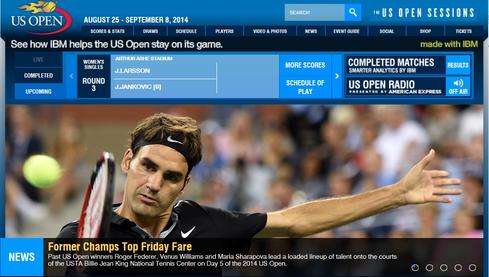 New mobile and social apps, big data sets, improved analytics, and predictive cloud infrastructure are among the capabilities USTA and IBM are bringing to this year's end-of-summer tourney. IBM also sponsors and provides the technology behind the three other big tournaments that make up the professional tennis Grand Slam: The Australian Open, The French Open, and Wimbledon. But each tournament has its own host organization, character, and tech-support needs.

As an example, IBM worked with USTA to develop a Trendcast social app that's unique to the US Open. The Web and mobile app aggregates and filters social media comments about the tournament, identifies key trends, tries to engage fans in the conversation, and provides a sponsorship opportunity for the USTA.

"Sponsorships are critical for the US Open, but they are less important at Wimbledon, where it's more about enjoying tennis in an English garden," said John Kent, program manager of IBM Worldwide Sponsorship Marketing. USTA is a nonprofit organization that relies on the US Open as its primary funding source for tennis promotion and youth tennis programs in the US, whereas Wimbledon is run by the charitable arm of The All England Lawn Tennis Club.

IBM's SlamTracker match statistical-analysis app is used by all four Grand Slam tournaments, but this year's US Open version features an autopilot mode that pushes a steady stream of point-by-point insights during the course of a match.

"What's nice about the design of the new SlamTracker app is that it speaks to the more casual fan as well as avid fans who know exactly what stats they're looking for," said Nicole Jeter West, USTA's senior director of ticketing and digital strategy.

New data sets, including ball and player position data, have added SlamTracker data visualizations for 2014, so in addition to stats such as forced and unforced errors, first services, and successful returns, fans can now see a serve-depth chart and corresponding percentages on winning and losing points.

Other nuances of the US Open 2014 tournament include IBM Watson Foundation technologies operating behind the scenes, predicting and constantly reforecasting site traffic loads so the tournament site never goes down even as Web and mobile visits fuel traffic spikes during the height of the tournament. Read on to see the new apps, new data visualizations, and fresh capabilities behind US Open 2014.

If money is at stake, you can bet that they'd want to do whatever possile to put the odds in their favor.
Reply  |  Post Message  |  Messages List  |  Start a Board

@stotheco. That is why data scientist are being introduce into sports teams.  I read many articles that soccer sport teams are hiring such individuals.  I won't be surprise if data scientist will become part of all sports teams in the future.
Reply  |  Post Message  |  Messages List  |  Start a Board

Check this out. There will be a new 24/7 fantasy football channel this season. Imgine the constant number crunching that needs to happen for there to be up to the minute projections. Enough for there to be a channel people are willing to pay for!
Reply  |  Post Message  |  Messages List  |  Start a Board

"After seeing how much stats basketball teams crunch up, I'm not surprised tennis also racks up a lot of stats"

@sotheco: I think what these analytics mostly contain is stats about every memeber of the team and about every other opponent out there. That's what adds to the complexity. In the case of tennis, since there are only one or two people in a team, there's generally less data to record and hence less analytics to process.
Reply  |  Post Message  |  Messages List  |  Start a Board

"So much data so little practical application.  I don't know how the USPTA ever functioned without so many ways to tally/analyze groundstrokes.  "

@asksqn: While I agree that there's really no correlation between the amount of analytics you have and the performance you derive, I don't think those stats are entirely useless or that anlaytics in sports doesn't make sense. I think all that data has a lot of application but it depends on how you use it. Not every match will let you make use of all the data you've collected but once you run into a problem related to planning for a match, you may find them useful.
Reply  |  Post Message  |  Messages List  |  Start a Board

Stotheco, being a soccer lover, I have found a lot of stats being made available in that game to users. Not just in real live match, if you pick a soccer game on a gaming console, the number of stats available regarding a player in a virtual game teaches you more about a player than in the real world match and pre-match post-match analysis.
Reply  |  Post Message  |  Messages List  |  Start a Board

Pedro, actually every game is a number-crunching game if you come to analyze it. Every game has a score to my knowledge and that's a number. So how that score was made will again involve numbers. It is good for players and coaches that they can easily identify their SWOT.
Reply  |  Post Message  |  Messages List  |  Start a Board

Doug, these days users want all the stats at their disposal without any delay or processing time. Through this IBM will serve many such users. Also, easy availability of stats can also make those users interested in stats who previously weren't concerned about the specifics of a player's strengths and weaknesses.
Reply  |  Post Message  |  Messages List  |  Start a Board

I think most sports have analytics that players and teams can use moving forward. After seeing how much stats basketball teams crunch up, I'm not surprised tennis also racks up a lot of stats. Very interesting and it will definitely affect how players train and work out for future matches.
Reply  |  Post Message  |  Messages List  |  Start a Board

I think such applications will be good for coaches as well as for fans.  They will be able to measure players' performance during each game.  I had no idea that tennis was a number crunching game.
Reply  |  Post Message  |  Messages List  |  Start a Board
Page 1 / 2   >   >>
Editors' Choice
Hot Topics