It would be nice if most data analyses ended with valuable decisions or actions. But in reality, many analyses end with a PowerPoint, finely tuned for board room presentations. Data is explored, analyzed, filtered, transformed, and then exported into a storytelling medium where it becomes static. The PowerPoint may be used to support or refute a hypothesis or to provide a status update.

But what if that same data and analysis could remain within the BI tool while delivering a boardroom-quality presentation? Could those death-by-PowerPoint meetings become more effective, interactive work sessions? Can the data be better presented, not only to support a hypothesis, but also to guide a decision maker to a logical conclusion that compels action?

This is the vision behind recent innovations in a number of visual data-discovery tools. Tableau Software and Qlik call them story points and storytelling, respectively, while SAP calls them storyboards and infographics. SAS, meanwhile, brings live integration within PowerPoint itself.

While these features have similar names, the capabilities differ greatly. Here's a closer look.

Tableau story points
Tableau released the concept of story points in version 8.2 in June. In this approach, a user can insert a data visualization onto a canvas and save the filters behind the data analysis. The idea of story points is to let users present the data as a story, with a beginning, middle, and end. The banner of the canvas can include a storyline title that is clickable. For example, in the story below, "Profits are increasing" is a clickable title. Multiple visualizations can be linked together to create a PowerPoint-like slideshow. Within each page, users can adjust the filters. As Tableau explains it, the data tells you what's happening, but the story guides you to an understanding of why it's happening. 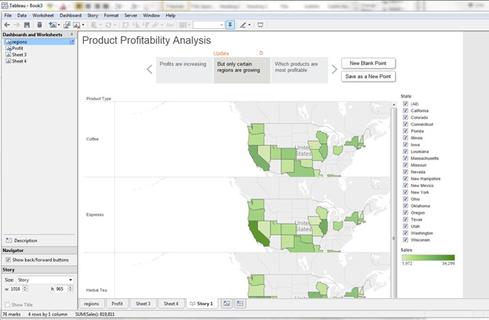 QlikTech storytelling
Qlik Sense Desktop was released in July as a free desktop visual-discovery tool based on the vendor's next-generation interface. The vendor has not announced a release date for Qlik Sense for the enterprise, which is currently in beta. In Qlik Sense Desktop, dashboards and individual visualization can be added to a story.

Compared to Tableau's approach, Qlik Sense has a few more bells and whistles for storytelling. First, each page of the story can contain multiple visualizations or snapshotted images with the drill point and filters saved. Also, there is an "effect" option that automatically recolors a chart so top (or bottom) performers stand out (in the image below, higher salaries are highlighted). Additional text can be added to the story, whether a simple annotation or a full paragraph. Images and shapes can also be added to the canvas to create an infographic. In play mode, each slide nicely transitions to the next. Dashboards remain interactive. 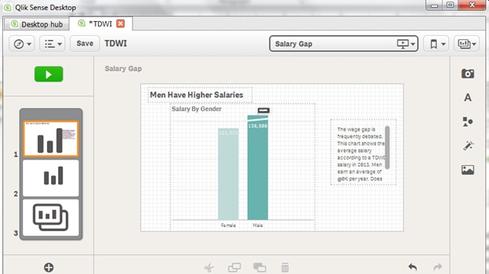 SAP Lumira storyboards
SAP added the concept of storyboards to Lumira early this year. In contrast to the Tableau and Qlik approaches, SAP's storyboards are better described as dashboards with multiple visualizations on a single page. Lumira previously lacked the ability to create these simple dashboards, but it's a capability that most other visual data discovery tools already offered.

In addition to supporting visualizations and filters, Lumira storyboards let you add images and text boxes for titles or paragraphs. A version 16 update released in June brought support for infographics -- the ability to add pictograms and shapes to the storyboards.

As shown below, there is a preview feature that shows how the infographic will appear on various devices. With infographics, users can also set color options for images, backgrounds, and some charts. This, of course, should be an expected feature in any BI tool, but it was lacking in earlier Lumira releases.

SAP's infographic capability is an interesting concept, but I found the capabilities too immature to replace PowerPoint. For example, in trying to add a callout, text had to be added in a separate step, and the callout pointer could not be repositioned to connect to a particular image or outlier within the chart. 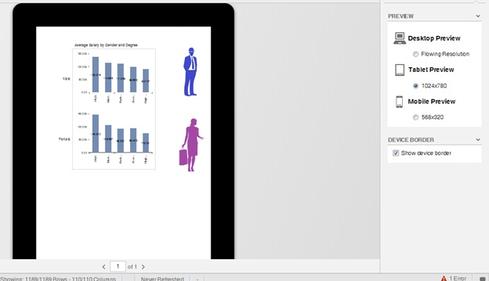 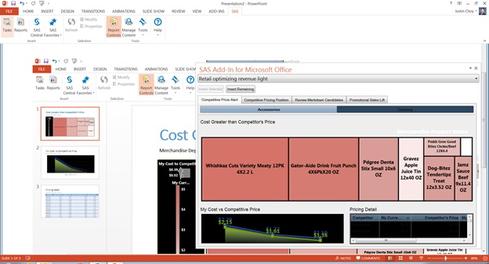 More stories to come?
All of these features reflect a growing trend in how to better present data and findings as part of a cohesive story. I suspect storytelling capabilities will continue to emerge in other visual data discovery tools. And as with any new technology, I expect second and subsequent releases will only improve.

Cindi Howson is the founder of BI Scorecard, a resource for in-depth BI product reviews based on exclusive hands-on testing. She has been advising clients on BI tool strategies and selections for more than 20 years. She is the author of Successful Business Intelligence: ... View Full Bio
We welcome your comments on this topic on our social media channels, or [contact us directly] with questions about the site.
Comment  |
Email This  |
Print  |
RSS
More Insights
Webcasts
Making XDR Work in Your Enterprise - May 12
Multi-Cloud Data Management for Modern Applications
More Webcasts
White Papers
A Decade of Passive DNS
World Wide Technology: Digital Transformation Customer Journey
More White Papers
Reports
2021 Application Security Statistics Report Vol.2
Intelligent Outcomes Are Key to Business Resilience
More Reports

I guess we didn't have to wait long for the "next story to come" that Cindi hints at in her story. Check out "Workday Steps Up To Real-Time Reporting" and you'll see this cloud-based HCM and financial management vendor has added a Composite Reporting tool with a "notebook" feature aimed as delivering board-room-ready financial reports on tablets such as the iPad. In this case you don't need a separate BI tool; it's part of the cloud apps platform.
Reply  |  Post Message  |  Messages List  |  Start a Board
InformationWeek Is Getting an Upgrade!