Now that IBM is getting out of the x86 business with the sale of that business to Lenovo, the gloves are off and it's redoubling its efforts to compete with Intel for both Linux and scale-out server business.

This is the message IBM sent on Friday with the release of a range of new servers based on its Power8 chips, announced in April. Of course IBM, and competitors HP with Itanium servers and Oracle with Sparc servers, has been losing ground to Intel for the last few years, and the losses continued in the first quarter of 2014, with RISC/Itanium sales down 19.9% in shipments and 16.9% in revenue year over year, according to Gartner.

So what's different now? For starters, IBM says its pricing is more aggressive than ever, starting well below $10,000 even as the Power8 chips give it nearly a 20% price-for-performance advantage over comparable Intel products, according to the company's benchmarks. What's more, IBM says its OpenPower Foundation, an initiative to open source the Power architecture, is starting to bear fruit, starting with new IBM Power S824L servers that include graphical processing unit (GPU) acceleration from Nvidia.

"The Nvidia GPU embedded in Power systems provides acceleration not just for high-performance computing, but also commercial workloads," said Brad McCredie, IBM Fellow and VP of Power development, in an interview with InformationWeek.

The big data arena is now dominated by distributed-computing platforms that are designed to take advantage of many, relatively low-powered x86 servers rather than higher-powered servers such as those in the Power line. IBM insists that it, too, can compete in this arena, and it points to the IBM Data Engine for NoSQL as example. The new product runs the open source Redis in-memory key value store on Ubuntu Linux on the Power System S822L sever combined with the IBM FlashSystem 840. The system offers 40 TB of flash memory and replaces the capacity of 24 separate Intel servers, according to IBM. 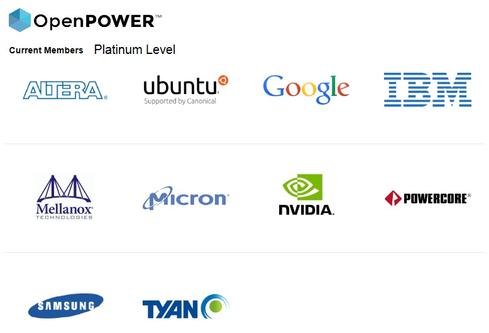 A listing of Platinum-level members of IBM's OpenPower Foundation.

Nvidia is among 59 members that have joined the OpenPower Foundation since its launch in April. The list of members includes memory, interconnect, white-box server, and operating system providers Altera, Mellanox, Micron, Samsung, Tyan, and Ubuntu.

Power's legacy is as a platform for AIX (Unix) and iSeries (formerly AS400) workloads, such as enterprise-grade ERP applications from the likes of SAP and Infor. Many of these scale-up, transactional workloads are moving to Linux, and here IBM on Tuesday announced massive Power E870 and Power E880 systems with up 192 cores and offering more than 1,500 threads of compute power.

In 2015 and 2016, OpenPower partners will unleash a wave of field-programmable gate array (FPGA) accelerator cards that will accelerate workloads such as risk analysis, simulation, and big data correlation, according to McCredie. So the hardware renaissance is progressing, but the proof of open source success will be in new software development for the platform beyond the IBM portfolio.

Doug Henschen is Executive Editor of InformationWeek, where he covers the intersection of enterprise applications with information management, business intelligence, big data and analytics. He previously served as editor in chief of Intelligent Enterprise, editor in chief of ... View Full Bio
We welcome your comments on this topic on our social media channels, or [contact us directly] with questions about the site.
Comment  |
Email This  |
Print  |
RSS
More Insights
Webcasts
What We Can Learn from Sports Analytics
Protecting Your Enterprise's Intellectual Property
More Webcasts
White Papers
The State of Threat Detection and Response
Research Report: Evaluating Your Organization's Cybersecurity Readiness
More White Papers
Reports
IDC FutureScape: Worldwide Digital Transformation Predictions
The ROI Of SD-WAN: Not Just A Numbers Game
More Reports

I agree with your point - we need more players/vendors in this market. If IBM can produce cloud servers and become specialized in this segement, then Power has the chance to prevail. But it depends on whether IBM can give a neat definition/target for Power - obviously it should not be just targetted for general purpose computers, servers.
Reply  |  Post Message  |  Messages List  |  Start a Board

Intel has done a brilliant job of making the x86 architecture into powerful servers. But we need more than one supplier. The one thing that makes this IBM initiative something other than daft is the need of cloud suppliers for the most powerful, energy efficient server possible. And they buy them in large numbers. If IBM can find a way to become a cloud server supplier, Power has a brighter future.
Reply  |  Post Message  |  Messages List  |  Start a Board

You can add accelerators, FPGAs, storage options and third-party suppliers of servers, but what's needed for Power and other RISC platforms to grow is more software written to run on these servers. Unless or until that happens, sales won't rebound. On this front IBM can't go it alone. When I see more software vendors in the Foundation, I'll take that to be a real sign of progress.
Reply  |  Post Message  |  Messages List  |  Start a Board
Editors' Choice
Hot Topics