Cloud computing and in-memory databases, two darlings of the big data movement, have passed the "peak of inflated expectations" and are headed into the "trough of disillusionment," according to Gartner's Hype Cycle for Big Data, 2013.

Hype Cycles are Gartner's way of communicating the degree of hyperbole versus productivity associated with emerging technologies, with the peak and trough being followed by a "slope of enlightenment" and progressing to "plateau or productivity" as technologies mature. In the case of cloud and in-memory databases, the plateau is two to five years away, according to research discussed at last month's Gartner Symposium.

In the case of cloud, compute capacity and storage in the cloud are thought of by many as cost-saving options, but "organizations are a little disappointed about perceived cost versus reality," Gartner analyst Nick Heudecker told InformationWeek. "We're starting to see some pullback with organizations realizing that they may not be saving that much money."

That could be because moving anything approaching big data scale into the cloud involves storage and data-movement costs that can add up. Heudecker cited the case of the streaming service Spotify, which recently opted to move its cloud deployment on-premises.

[ Looking for the inside edge on big data breakthroughs? See What's The Best Path To Big Data Insight? ]

"Cloud makes sense when you can't predict your load or demand, but once you have a very predictable workload and you can easily estimate what kind of resources you're going to need, the cloud may not be as attractive," Heudecker said. 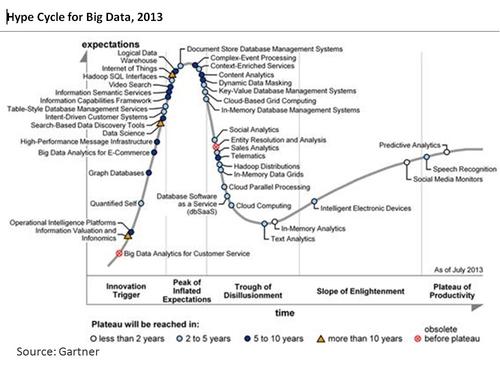 Spotify's example matches the experience of Rob Rosen, big data field lead at Pentaho, who said he often sees cloud as the place where big data practitioners start. "The cloud is a great place to do prototyping and early architecture work, but once they succeed and start to scale up, they start to see monthly bills that make them say, 'hey, wait a minute; maybe it's time to bring this in house,'" Rosen said.

On the in-memory database front, Heudecker said the technology has captured a lot of attention, but now questions are emerging as people look beyond the touted benefits of fast performance, simplified infrastructure, and potentially smaller data footprints and power requirements. The questions are popping up about support for disaster recovery and high availability, availability of database tooling, and the impact on application development teams.

"Right now in-memory technology is adolescent," said Heudecker. "We forecast that it will be two to five years before it reaches the plateau of productivity -- perhaps longer, depending on the database."

SAP's Hana platform is perhaps the best known in-memory database platform, but others include the Aerospike database, in use for several years mostly in online advertising; IBM's BLU acceleration feature for DB2, introduced earlier this year; and Microsoft SQL Server 2014, an update set for release in the first half of next year that will include an In-Memory Online Transaction Processing option that's now in public beta. Oracle preannounced an in-memory option for Oracle database, but beta and GA release dates have not been announced.

Other technologies plotted on Gartner's Hype Cycle for Big Data include Hadoop SQL interfaces and the Internet of Things now headed for the Peak; social analytics and Hadoop distributions headed into the Trough; and social media monitoring and predictive analytics now on the Plateau. One final observation from Heudecker is that the Big Data Hype Cycle is going to be particularly dynamic.

"There are a large number of technologies on this Hype Cycle, and the majority of them are clustered around the Peak," he said. "That means we're going to see a lot of change over the next two to five years."

We welcome your comments on this topic on our social media channels, or [contact us directly] with questions about the site.
Comment  |
Email This  |
Print  |
RSS
More Insights
Webcasts
To Pay or Not to Pay? Solving for the Ransomware Risk Equation
Security for Hybrid Workforce Deployments
More Webcasts
White Papers
4 Steps to Build the Micro Focus Software Factory
Ransomware in Focus: CISO Perceptions, Perspectives, and Plans
More White Papers
Reports
2022 IT Salary Survey
Enterprise Cybersecurity Plans in a Post-Pandemic World
More Reports
Copyright © 2022 UBM Electronics, A UBM company, All rights reserved. Privacy Policy | Terms of Service