Enterprises see the light on big data opportunities. It's only a matter of time before mainstream data-management environments evolve.

What's the status of the big data revolution? Fresh clues emerged this week with Hadoop vendor Cloudera scoring a $160 million round of venture capital funding, big data analytics company Platfora getting a $38 million capital infusion, and Allied Market Research issuing an estimate that the $2 billion Hadoop ecosystem (as measured in 2013) will quickly grow to $50 billion by 2020.

Structure keynoter Paul Maritz, CEO of EMC-spinoff Pivotal, said his company is focused on making Hadoop enterprise-ready so "mere mortals can do what the Internet giants have done with lots of data." Businesses are "starting to wake up to the opportunity," he said, citing General Electric as a case in point. GE CEO Jeffrey Immelt has changed the direction of that industry giant to seize the opportunity in the Internet of Things, which inspired its "industrial Internet" strategy, marked by connected turbines, locomotives, aircraft engines, and more. The need for big data tooling was one motivation behind GE's $105-million, 2013 investment in Pivotal.

Cutting-edge giants like GE aren't the only ones investing in big data. "We're starting to see companies reconceive themselves as data companies," Maritz observed. "When all of the consumers in the world got connected to the Internet, it enabled a radical change. As billions of devices get connected, that, too, will enable radical change, so we have to embrace it." 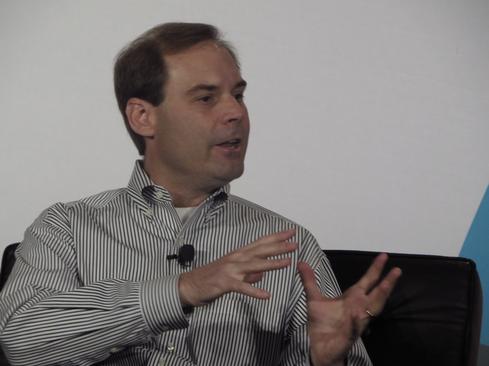 The big data expenditures won't go just to Hadoop providers. Exhibitors at the Structure event represented a cross-section of technologies:

You might think of some or all of these vendors as disruptors, but Shaun Connolly, Hortonworks VP of corporate strategy, says data is what's disrupting the datacenter, not Hadoop, NoSQL databases, or any other technology or group of vendors. It's the masses of data generated by new devices, applications, digital services, sensors, interaction modes, and more. New technologies and platforms weren't just invented by new vendors who wanted a piece of old IT budgets. They were invented to solve new problems that weren't well addressed by the old tools.

My latest example of a data lake user -- coming in a story next week -- is a major drug manufacturer that is running Hortonworks on Amazon's cloud. The deployment lets them study all data related to the production of drugs -- 10+ years worth of information including plant-floor temperature and pressure sensor readings -- in order to spot yeild variations by batch and determine how to optimize production yeild. It's the sort of lighthouse implementation that shows others the way and makes adoption much more likely in the five-year time frame than the 15-year time frame. Stay tuned for the full story next week.
Reply  |  Post Message  |  Messages List  |  Start a Board

I'm told that Cloudera and Hortonworks are each logging deals at a rate of 50 to 70 per quarter. Throw in all the other Hadoop distributors and call it 500 to 700 per year. That's at current rates, which we can assume will accelerate. In 2013, for instance, sales teams at HP, Microsoft, SAP, and Teradata added Hortonworks' distribution to the portfolio, and we can confidently guess that having more feet on the street will increase sales. Cloudera notes that deal sizes and deployments are growting. And let's assume also that these suppliers are pursuing the biggest companies possible.

With these stats, it won't take long to see big adoption among the Global 2000. From there the question is how much serious, production-grade work are they doing on the platform and to what degree are they moving existing workloads onto Hadoop? In 2014 we're still in the early days. By 2020, I think the data-management arena is going to be very different.
Reply  |  Post Message  |  Messages List  |  Start a Board

Hadoop is something like a big, undifferentiated resevoir. It collects data from everywhere. The water coming out of your faucet, on the other hand, is charcoal-filtered and chlorinated. Yes, there's a lot of water in the resevoir, but remember where the stuff good to drink is coming from. Sorry, we're having a drought here in Calif.
Reply  |  Post Message  |  Messages List  |  Start a Board

The $50 billion figure is the one that sounds high. The Data Hub/Data Lake concept foresees Hadoop as a place where you store many types of data, including high-scale machine data (log files, clickstreams) that many companies haven't been collecting or keeping until recently. That you have copies of such data in a hub does NOT mean that you are necessarily replacing transactional systems or even data warehouses. It's a cheaper platform on which to gain new insights and perhaps replace some workloads. If the Hub has high-scale data and lots of historcal data long since deleted from operatoinal systems, it's not at all unrealistic to see 60%, 70%, 80% of the total data footprint in an organization being stored on Hadoop.

"Rob Bearden, CEO of Cloudera-rival Hortonworks, said that he expects see "60%, 70%, 80%" of enterprise data moving into Hadoop over the coming years." Does this sound high to you, Doug? Sounds pretty high to me given state of tools and Hadoop talent.
Reply  |  Post Message  |  Messages List  |  Start a Board
InformationWeek Is Getting an Upgrade!