"These companies are very much on the forefront of Web scale and are working with us to continuously extend the limits of MySQL," said Tomas Ulin, VP of MySQL engineering.

WebScaleSQL.org said its features improve MySQL scalability while also making it easier to operate at high scale, but that alone won't dent demand for NoSQL databases, said Matt Asay, VP marketing and business development at MongoDB, maker of the popular NoSQL database of the same name.

"Scale is just one of the motivations for using NoSQL databases, and it's arguably not even the most interesting or important," Asay said. "It's far harder to deal with the proliferation of unstructured or semi-structured data types."

These "modern" data types are growing at twice the speed of structured data, said Asay, but they "don't easily fit into legacy databases built around the concept of rows, columns, and joins."

Cassandra support firm DataStax also touts the "flexible and dynamic data model" of NoSQL products, which is what enables them to handle variable data. But Robin Schumacher, DataStax VP of products, isn't ready to cede anything on scalability. 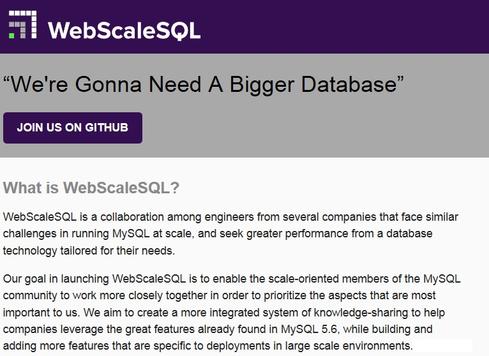 "At first blush, it appears that what WebScaleSQL is doing will be a help to those [relational DBMS] use cases where MySQL is a fit, but the data volumes outgrow the read performance capabilities of the engine," asserted Schumacher, who is a former MySQL employee. "Our customers choose DataStax so that they can linearly scale both writes and reads, regardless of data volume."

The key selling point for so-called NewSQL DBMSs is the combination of Web scalability and reliance on SQL. It's something they have in common with WebScaleSQL, so Robin Purohit, CEO of NewSQL vendor Clustrix, said he "applauds leading Internet giants for validating the importance of scalable SQL databases, busting the myth that NoSQL is the answer to all problems of scale."

What MySQL Community Edition (and thus WebScaleSQL) is not, however, is a highly distributed, clustered-server product, the architectural approach used by the vast majority of NoSQL and NewSQL vendors -- including all those mentioned in this story.

"For large-scale deployments of MySQL, you still need to shard where your data is split up into multiple distinct MySQL databases," said Raj Bains, Clustrix director of products. "NewSQL databases are written from scratch to be distributed and provide a single logical database to the user. That means you can run real-time analytics across your entire database -- that is split across many machines -- without worrying about how your data is split up."

Given the companies using WebScaleSQL, there's no doubt that it can scale, but it does so on single, high-powered servers. Though the product is easier to manage at scale than standard MySQL, all these vendors agree on the point (made in our initial coverage of WebScaleSQL) that lack of commercial support options will be a deal breaker for most enterprises.

"Facebook, Google, LinkedIn, and Twitter have the resources to fill the holes in their product and support needs," said Rahim Yaseen, senior VP of products and engineering at Couchbase. "But with no commercial support, the general market applicability of what comes out of this is severely limited."

Oracle, for one, has no plans to offer support for WebScaleSQL, so for now, it's something for truly high-scale MySQL users who want the latest and greatest features right away and are willing to handle support on their own in order to get them.

"If they can save 5% or 10% on I/O capacity, that's a huge win for them, but we do new release cycles on a 24-month basis and they want them yesterday," said Ulin. "The same things that they're doing with WebScaleSQL will come into the regular MySQL releases, but a bit later."

Doug Henschen is Executive Editor of InformationWeek, where he covers the intersection of enterprise applications with information management, business intelligence, big data and analytics. He previously served as editor in chief of Intelligent Enterprise, editor in chief of ... View Full Bio
We welcome your comments on this topic on our social media channels, or [contact us directly] with questions about the site.
Comment  |
Email This  |
Print  |
RSS
More Insights
Webcasts
Take DevOps to the Next Level
How the Rapid Shift to Remote Work Impacted IT Complexity and Post-Pandemic Security Priorities
More Webcasts
White Papers
2020 SANS Enterprise Cloud Incident Response Survey
The Top 5 Mistakes Everyone is Making in Vulnerability Remediation
More White Papers
Reports
Immuta Data Engineering Survey: 2021 Impact Report
Building the SOC of the Future
More Reports