Building Apps Without Code: 7 Options For Your Enterprise - InformationWeek 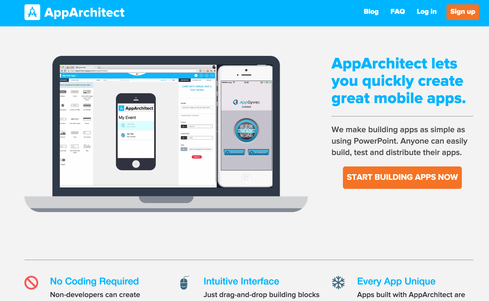 If you want to give this whole "no-code application" concept a try, then AppArchitect could be what you're looking for. With an interface described as being most like PowerPoint, this service is designed for business users rather than programmers. Best of all, it's free.

AppArchitect has a rather smooth, if somewhat simplistic, user interface that's reached through its website. It's not an "enterprise class" development environment, but it's entirely possible that your business units aren't looking for enterprise-class power -- that's why they have you.

In December 2014, AppArchitect was acquired by AppGyver, and it's not yet clear what that will mean for the service. Until things change, though, this could be the perfect service for the workgroup that wants to try spreading its application wings before it leaps out of the nice, safe IT nest.

Kurtis, that's for leading an insight to such programming model. I think Canvas is almost similar to Kepler work flow; where building blocks can be drag and connect to form a programming model. We are using Kepler workflow models for engineering and scientific application developments.
Reply  |  Post Message  |  Messages List  |  Start a Board

As a programmer, freelance for the last few years, I have mixed feelings and experiences regarding build-the-application-without-a-programmer applications.

When directly exposed to them, its usually because their programmer-less program has reached some sort of capability or practicality ceiling, and now they need a programmer to 'extend' what they have 'built'. In theory, this can be done with some of these DIY applications, but in practice have never seen one that didn't require a complete rebuild. Its not a total loss though if lessons were learned about the business rules needed. But usually, its a disaster by the time I get called in.

The indirect exposure I get to them is almost always hearing about things that were built with zero input from IT. Sometimes these applications come to light because they are melting a server, or have been hacked, etc.

I guess I have an off center persepctive, as I don't usually get exposed to these applications until something goes pretty badly wrong. But that is part of the problem, the complete shutting out of IT in IT related matters.
Reply  |  Post Message  |  Messages List  |  Start a Board

@Gigi3, thanks so much for your comment. I'm curious about your experience with Kepler: Do you find you can do everything you need just by dragging and dropping components, or do you have to hand-code specific routines? Most of the examples I found allow you to drag-and-drop for straightforward projects but admit that, for specific, high-demand cases, you would either need to code routines separately or choose another tool. It seems like that might crop up a bit more frequently in the scientific and engineering fields, but I'll admit that I could be wrong on this!
Reply  |  Post Message  |  Messages List  |  Start a Board

@Somedude8, I think your experience is why IT needs to be involved, even if IT staff isn't doing the "front line" app development. If you were involved in the selection of tools and "consulted" on program design, it might well maximize the effect of your time while allowing the business unit the control (and speed) they're looking for.

I hear from more and more executives that enterprise IT needs to think of itself as an internal system integrator rather than the only team allowed to touch application development. Picking the right tools and developing the right process for using them are steps that (it seems to me) IT should work on if they want to retain both influence and sanity.
Reply  |  Post Message  |  Messages List  |  Start a Board

@Curt: I don't think IT has anything to do with thinking itself to be an "integrated system" because it is not. Support and side development is all what I manage to picturize when thinking about IT. Core computing and core development cannot be classified into IT, IT as we know is Information Technology but in real life IT means backup and support. Having worked in an IT firm for 2 years I have learn't the use of many tools and how to solve problems with these tools at your disposal.
Reply  |  Post Message  |  Messages List  |  Start a Board

Exactly! I am often the first to question the ROI of having simple things programmed from scratch when there are OTS tools available that fit the bill. I suspect that that most non-IT departments still have the scars from IT smacking their fingers with rulers for so many years at the mere mention of doing something without their blessing, so relish the 'freedom' they mostly have these days. A middle ground like you describe is exactly what I believe needs to happen for the most effective results to be achieved.
Reply  |  Post Message  |  Messages List  |  Start a Board

@Somedude8: I have been using the Zoho environment for quite some time now, frankly because I didn't want to develop web apps by hand, i.e. I thought wasting time on simple projects is really unnecessary, and that is why I sought Zoho's help and you should know that it is not completely useless.
Reply  |  Post Message  |  Messages List  |  Start a Board

@Somedude8: True. Everyone has a smack dab experience in IT, be it a regular management staff or a hardcore developer creating business values through applications. I think these environments actually help you in your dark days when you have to submit something "programmey" and you don't know it, so you seek the help of simple tools such as Canvas.
Reply  |  Post Message  |  Messages List  |  Start a Board

I am not saying that using these things is inhernetly a bad thing to do, not at all. They can be quite good. I am saying that by the time such projects get to me, they usually have become a disaster, which is part of the reason it the project is coming my way in the first place. No reason to get a programmer involved int he ones that don't go south. So, my perspective is dramatically skewed because I only see the bad news projects.
Reply  |  Post Message  |  Messages List  |  Start a Board

@SachinEE, I think what we're seeing in many shops is an evolution from the days when IT was the only group that did anything to make computer and network systems happen to an era in which IT will be consulting to business units as much as they're making things work.

From an IT perspective this hits both budget and culture -- IT won't get to set the schedule for everything the way they did in the past and will be forced to be much more responsive to business units. I think that it's ultimately a good thing for IT, but the transition is proving to be traumatic in many ways (for everyone concerned).
Reply  |  Post Message  |  Messages List  |  Start a Board
Page 1 / 6   >   >>
Editors' Choice
Hot Topics