DashDB and DataWorks, now available on IBM's Bluemix cloud apps platform, are outgrowths of IBM's February purchase of Cloudant. DashDB is a cloud-based data warehouse service, while DataWorks is a cloud-based data-integration service. IBM is being cagey about the technological roots of these new services, though it's a safe bet that the columnar, SQL-based DashDB service is based on IBM Netezza, while the lightweight data-transformation and data-movement services of DataWorks are based on IBM CastIron.

Initially, both services are designed to work in tandem with the Cloudant NoSQL database service, but "the roadmap calls for the services to eventually work with any source," said Derek Schoettle, CEO of IBM Cloudant, in a phone interview with InformationWeek.

Customers running web or mobile applications on IBM Cloudant will be able to automatically replicate data from cloud-based NoSQL databases into DashDB for historical reporting and analysis. Using DataWorks, customers will be able to bring in transactional or enrichment data from on-premises or cloud-based sources for deeper correlation, analysis, and prediction.

"We've integrated quite closely such that a user of Cloudant can export a database from within Cloudant, put it through a transformation [in DataWorks], and get that data to DashDB so it can be analyzed in a traditional schema," said Schoettle. "It essentially takes JSON and figures out what the schema should be in a relational model."

DashDB is clearly IBM's answer to the Redshift data warehousing service, which Amazon Web Services reports to be one of its fastest-growing products ever. Google BigQuery is another fast-growing offering in the cloud-based data warehouse service arena. DashDB and DataWorks are being delivered in a freemium model as an extension of users' Cloudant accounts, according to Schoettle, with a free tier of service and charges based on compute and data capacities.

As InformationWeek reported on Monday, IBM is also making the Cloudant database available on-premises as Cloudant Local. Cloudant is based on CouchDB, but this is the first availability of a commercially supported version of that open-source product for deployment within corporate data centers. Cloudant executives said the cloud-based NoSQL service was instrumental in winning IBM's recent mobile apps deal with Apple. 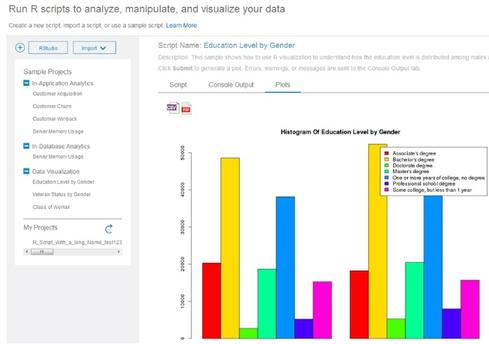 In other news announced at IBM's Insight event in Las Vegas this week, the company said its IBM Cognos and IBM SPSS business intelligence and analytics suites are being offered as hosted, managed services in the IBM SoftLayer cloud. This will enable Cognos and SPSS customers to either expand on or completely migrate to IBM's private cloud.

IBM also introduced its Watson Analytics service, which was announced last month, and what sounded more like warmed-over versions of previously announced "solution accelerators" for Customer Insight, Operations Insight, Security and Fraud Insight, Risk and Compliance Insight, and Data Warehouse Modernization. The accelerators are pre-integrated collections of IBM software that can be deployed -- with the help of IBM services -- in on-premises data centers, in private clouds (yours or IBMs), or in hybrid combinations of the two.

What will you use for your big-data platform? A high-scale relational database? NoSQL database? Hadoop? Event-processing technology? One size doesn't fit all. Here's how to decide. Get the new Pick Your Platform For Big Data issue of InformationWeek Tech Digest today. (Free registration required.)

I didn't think the inexact operations -- "eventual consistency" -- of the NoSQL systems impressed IBM too much a few years ago. Now it's bought Cloudant and is trying to catch up fast. Culturally, IBM as the home base of relational database with its ACID test for data consistency would look down on "eventual consistency" systems. But loose logic has its purposes, just as loose lips sometimes do more than sink ships. They learn about the customer, in a gossipy sort of way.
Reply  |  Post Message  |  Messages List  |  Start a Board

I thought I had amnesia yesterday when an IBM exec insisted that Cognos and SPSS were NOT previously available in the cloud, but I've found references to their availability on the old "IBM SmartCloud."

I also found references to some offerings that sounded much like those "solution accelerators": http://www.informationweek.com/software/information-management/ibm-smart-solutions-predict-fraud-risk-customer-behavior/d/d-id/1103438

What's new, I'm guessing, is that this is the rebirth of Cognos and SPSS managed services on Softlayer, and a repackaging of thoese "solution accelerators." If they're not a single SKU with a single upgrade path and single point of support, beware. That's not what I would call agile IT no matter how quickly they claim to install.